Anne Curtis has been visibly thrilled to travel around Africa for her honeymoon with husband Erwan Heussaff about a year after they wed in November 2017.

The actress and TV host has been sharing snippets of their safari adventure, which includes living in a lodge while wild animals freely roam in their surroundings.

Curtis shared yesterday, Nov. 10, one of Heussaff’s anniversary presents to her: a rescued baby elephant named Enkesha which he fostered under her name. The actress delightedly said she was “born a day after my birthday.”

“She had to be taken in because of a horrible wire snare that was wrapped around her little trunk. It now has a little hole in it because when she was much smaller she somehow was able to take the stitches out,” she revealed. 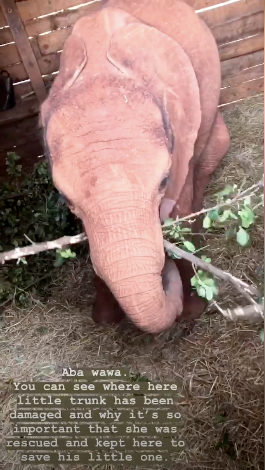 Little Enkesha can be seen being fed in Curtis’ Instagram Stories. “You can see where her little trunk has been damaged,” she noted.

“If ever you visit Kenya, a visit to @dswt (David Sheldrick Wildlife Trust) is a must. There are so many little elephant [calves] that have been rescued and you get to learn about all their stories — where they were found and why they had to be saved.”

Another issue she shared during her visit to Zambia was of rhinoceros being poached. “Sad news is, we were told that the dominant male was a victim of poaching just a few weeks ago,” she said in a Nov. 10 post.

“The eldest male left is too young for breeding so they are hoping to bring in another male from a different country in Africa to make new bubbas. If they aren’t able to do so it could be at least 5 years before they see another baby white rhino,” she added.

Exciting as it is to be in the wild, so to speak, Curtis shared that they have practiced caution. She shared a picture of a hippopotamus in an Instagram post on Friday, Nov. 9, taken as they canoed through the Zambezi river.

“I can’t explain the thrill and nervousness you feel being so close to these majestic animals,” Curtis wrote. “Every movement is done with caution, by making sure you listen calmly and carefully to your guide. No fingers or hands outside the canoe, unless you want them to be lunch for a croc [laughing emoji].”

While in Kenya, the couple dropped by Nyumbani Children’s Home which houses abandoned children with HIV/AIDS. “[Erwan] @erwan and I got to meet, play and interact with these kids. Who were just so happy and lovely,” she recalled in an Instagram post on Nov. 9.

“Now, when I met with my @unicefphils (UNICEF Philippines) family for a general meeting a month ago, I learnt that the Philippines now has the fastest growing HIV epidemic in the Asia-Pacific region,” Curtis said.

“One thing I have learnt from this visit, do not be afraid to get tested early so you can get proper treatment immediately — no matter your age,” the actress explained.

As for where the couple is headed to next, Curtis hinted on her Instagram Stories yesterday, Nov. 10, that they would be heading to a place where they would see some gorillas. Based on her social media posts, the pair made touchdown in Johannesburg, South Africa and has so far visited Zimbabwe, Zambia and Kenya. JB