Son of Beatles’ producer dives into the messy ‘White Album’ 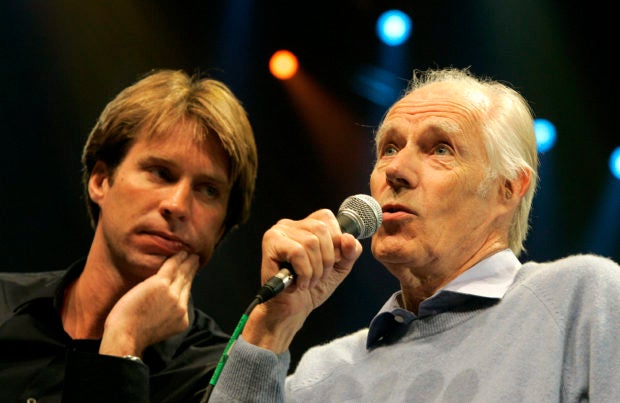 In this May 24, 2006 file photo, Giles Martin, left, listens as his father, original Beatles producer George Martin speaks after a sneak preview of a new Beatles-themed Cirque du Soleil show, “Love”, in Las Vegas. Giles Martin has reached into the treasure trove of original recording sessions to remix key albums by John, Paul, George and Ringo. Last year he remixed “Sgt. Pepper’s Lonely Hearts Club Band” and returns this year with a fascinating and exhaustive look at “The Beatles”, better known as the “White Album”, which contains such classics as “Back in the U.S.S.R.” to “Blackbird” and “Ob-La-Di, Ob-La-Da”. It coincides with celebrations for the album’s 50th birthday. Image: AP/Jae C. Hong

NEW YORK (AP) — Hardcore fans of the Beatles like to pore over every detail of the band and endlessly dissect their songs. Then there’s Giles Martin, who manages to time travel to meet the Fab Four.

Martin is the son of legendary Beatles producer George Martin, and he’s lately been returning to the treasure trove of original recording sessions to remix key albums by John, Paul, George and Ringo.

“It’s really nerve-wracking because it’s a legacy of music which is really important,” the soft-spoken Martin said. “What I do is make sure I provide the fans — and people who don’t even know the Beatles — with music that’s worth listening to and is interesting.”

Martin last year remixed “Sgt. Pepper’s Lonely Hearts Club Band” and this year resurfaces with a fascinating and exhaustive look at “The Beatles”, better known as the “White Album,” which contains such classics as “Back in the U.S.S.R.”, ”Blackbird” and “Ob-La-Di, Ob-La-Da”. It coincides with celebrations for the album’s 50th birthday.

Besides punchier, remixed versions of the 30 songs on the original double album, the anniversary package includes 27 acoustic demos of material the Beatles made at Harrison’s house before going into the studio and 50 studio outtakes, including the unreleased “Not Guilty”, a studio jam of “Blue Moon” and early versions of “Let It Be”, ”Lady Madonna” and “Across the Universe”, which would appear on other albums.

Martin was tapped by the surviving Beatles and the wives of Harrison and Lennon to rummage around in Abbey Road Studios in London and re-listen to everything, including abandoned songs and rehearsals.

That meant going through 107 takes of “Sexy Sadie”, dozens of versions of both “I’m So Tired” and “Long, Long, Long” and a 13-minute “Helter Skelter”. It meant hearing the Beatles discuss songs, joke and even order lunch. (You can hear Harrison at one point from the studio order a “cheese, lettuce, Marmite sandwich.”)

Among the gems in the box set is an unrecorded Lennon song called “Child of Nature” that will later morph into his solo hit “Jealous Guy” and also a very cool “Good Night” stripped of the orchestrations it got on the “White Album”. You can hear “Happiness Is a Warm Gun” start out life as quite gentle before ending up on the “White Album” like a template for Frank Zappa.

The Beatles worked through the summer of 1968, often in exhausting all-night sessions. Martin says the multiple takes for many songs may be because the band had largely stopped performing live.

“I think the most revealing thing for me working on the ‘White Album’ is just how creative they were, all of the time,” said Martin. “It’s almost like the studio couldn’t handle the level of demand that they wanted to do and the amount of songs they wanted to record.”

Martin’s father was heavily involved in the Beatles’ prior album, “Sgt. Pepper’s Lonely Hearts Club Band”, and was even lauded as the architect of their sound. But the Fab Four came together for the recording of the “White Album” in the summer of 1968 with a different goal in mind.

“They didn’t want an architect. They wanted to build an album from the bricks up and without any real idea about what it was going to be,” said Martin. “They indulged themselves because they knew that each member of the band would make the song better.”

William Moylan, a professor of music and sound recording technology at the University of Massachusetts at Lowell, said the recording of the “White Album” found the members of the Beatles at a crossroads.

The accepted wisdom when it comes to the “White Album” is that it was a rocky time for the band, which was disintegrating. Starr quit and walked out for an 11-day period. Critics have called the record a mess — a brilliant mess, of course — with each member often delivering solo songs.

But, like a polite Moses coming down from the mountain with the original tablets, Martin disagrees. He believes some of those interpretations to be exaggerated. He hears the Fab Four working together even on songs long considered to be done by only one Beatle.

“The revealing thing for me is you go back and listen to the tapes and what we have on the tapes is a cohesive unit playing together and working on songs together,” says Martin, who was born a year after the “White Album” was released.

“Listen to the sessions — they were very warm. And that’s the surprising thing. I think we thought the ‘White Album’ was this disparate, angry record — and it has certainly elements of that — but, in essence, the four of them made an album together they wanted to make.”

That sounds about right said Moylan, who has been a record producer, engineer, composer and teacher for 25 years: “I’ve really always had a sense that the Beatles were professional musicians as well as being friends. When they were performing, any personal friction evaporated because it was all about the music.” CC