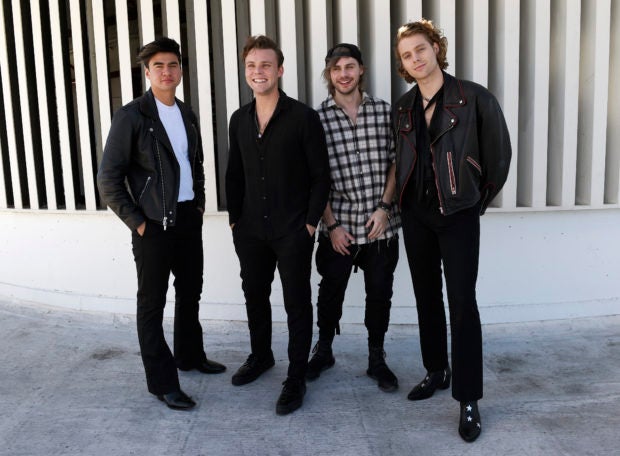 LOS ANGELES (AP) — 5 Seconds of Summer were already in shock when their album beat out Beyoncé and Jay-Z for the top spot on the Billboard 200 chart this summer. But having their single “Youngblood” reach the No. 1 spot on the pop songs chart and become an international smash hit has the band in awe.

“Youngblood” recently spent five weeks at No. 1 on the pop songs charts, which tracks Top 40 radio airplay. The track is spending its seventh week in the Top 10 on the all-genre Hot 100 chart, where rap songs have heavily dominated in the last year.

Clifford calls the hit song “authentically us” and said it allows fans to “see the real version of ourselves and our music in a very bold way than what we’ve delivered in other songs.”

“You can never predict the success of a song — you can only hope,” he added.

The band’s impressive year kicked off when “Youngblood”, also the title of their latest album, outsold Beyoncé and Jay-Z’s “Everything Is Love”, giving the band their third No. 1 album on Billboard’s 200 albums chart.

Clifford admits the band was worried when the superstar duo released their album as a surprise a day after 5SOS’ album.

“It was incredibly scary for us,” Clifford said. “But our fans really rallied behind us. They knew what it meant to us. We’ve always been kind of underdogs. But we were able to show on a large scale, a large platform that we can perform. We also showed that 5 Seconds of Summer mean business.”

They followed the success with an extensive tour — which wraps on Nov. 19 in Madrid — playing “Youngblood” to thousands of fans as the song continued to climb the charts.

“You write different songs when you’re 16 or 17 to when you’re 22 or 23,” said Hemmings, who sings and plays guitar. “I think our fans were the same age as us when we came out. I think they grew up with us. I think, in a way, we have similar tastes. We were trying to find something that would define ourselves as men like in our 20s. I think people have responded to that.”

Each band member was a solo artist before they formed the group in 2011. The foursome posted videos on YouTube of themselves covering songs by Ed Sheeran, Blink-182 and Chris Brown, garnering millions of views.

Their successful grassroots movement afforded them an opportunity to tour with One Direction in 2013, which gave them their first claim to fame. At the time, the group said it was a “huge risk” by leaving the comforts of Australia, where they had already built a good support base.

But Clifford adds that the band always knew they would make it.

“We were playing to 20 people in Sydney, Australia, and we knew that we were going to be the biggest band in the world,” he said. “With that mindset, we were just like unstoppable. There was no ceiling. You can never really know what you’re going to do, but you can manifest. Our career has been telling people what we’re going to be. I think people believed us.” CC

10 minutes with 5 Seconds of Summer