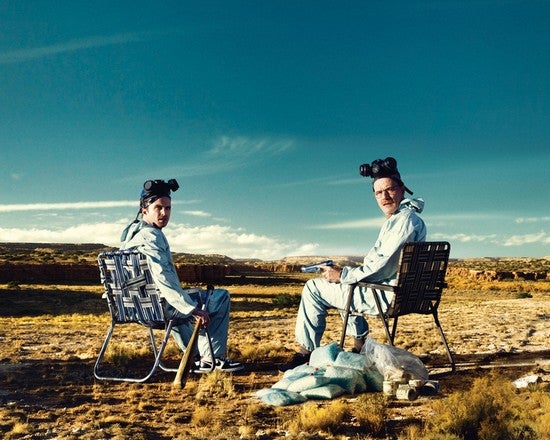 The “Breaking Bad” TV series ran from 2008 to 2013 and was shot on location in New Mexico. Image: AMC via AFP Relaxnews

Work on a feature-length “Breaking Bad” movie is underway, according to The Hollywood Reporter and the New Mexico Film Office.

Per the New Mexico Film Office, “Greenbriar” is going into production in Albuquerque, New Mexico, the same place that hit crime drama “Breaking Bad” was set and filmed.

According to both the Albuquerque Journal and The Hollywood Reporter, “Greenbriar” is in fact a feature-length extension of the “Breaking Bad” universe, though plot and cast details remain unknown.

Series creator Vince Gilligan is said to be working on the series, per not only THR but also other industry outlets such as TheWrap, Variety, Collider and so on.

He signed a three-year agreement with Sony Pictures Television in July, which raises the possibility that the “Breaking Bad” project may be destined for TV.

If true, “Greenbriar” joins a clutch of TV shows making the transition to a feature-length film format.

That sort of conversion process is common in children’s TV — “Teen Titans Go! To the Movies” released in July, there’s a “Dora the Explorer” movie set for August 2019, and a new “Scooby-Doo” expected in 2020 — while “Mission: Impossible” and “Transformers” have become blockbuster franchises.

For example, a “Downton Abbey” film is due for theatrical release in September 2019, featuring many original cast members, while just this week HBO added “The Walking Dead” to a telefilm project slate that already included “Deadwood”.

More immediately, November’s highly anticipated “Widows”, which counts Viola Davis, Michelle Rodriguez, Daniel Kaluuya and Liam Neeson among its cast members, releases this month, based as it is on a 1980s British series. JB

‘Shrek’ and ‘Puss in Boots’ in line for reboots

Read Next
‘Shrek’ and ‘Puss in Boots’ in line for reboots
EDITORS' PICK
Metro Manila logged most number of new COVID-19 cases — OCTA Research
WHO says monkeypox is not yet a health emergency
Guarding Sara: Why next VP is getting own security team
Beyond the Chocolate Hills: A farm-to-table, heritage culinary adventure of Bohol
A massive highway complex makes living in the South highly attractive
House energy committee chair Arroyo bats for cheap electricity
MOST READ
Leon Barretto steps up for sisters, asks dad Dennis Padilla: ‘Please stop resorting to public shaming’
Bea Alonzo, under lie detector test, says she wants prenup agreement with future husband
LOOK: Rita Daniela pregnant with first child
Marjorie Barretto to speak up on Dennis Padilla, kids’ relationship ‘in time’
Don't miss out on the latest news and information.