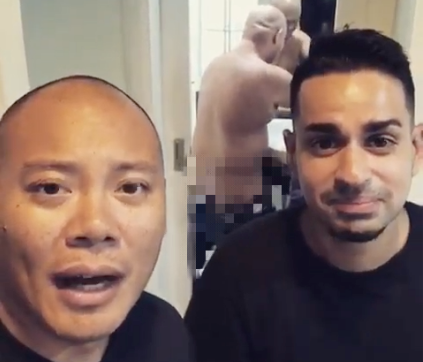 On Oct. 30 a video of Montano made the rounds on Facebook, showing him greeting Kagawad Crisanto Morales of Sta. Ana, Manila, a happy birthday. In the video, a woman behind Montano can be seen picking up an object in view, before disappearing seconds later. It is unknown whether the woman was indeed nude or not.

The radio hosts’ version of the viral video sees them wishing DJ Slick Rick (Eric Virata) and his wife Dr. Ging a happy anniversary. In the video, uploaded on Sam YG and DJ Tony Toni’s Instagram accounts on Oct. 31, the two can be seen looking into the camera as they do the greeting.

Seconds later, a bathroom with an “Employees Only” signage bangs open and what seems to be fellow host Jojo the Love Survivor (Jarlo Solde), whose jeans were hitched so low it showed his buttocks, walks over to the sink to wash his hands.

“Happy anniversary nga pala kay Slick at tsaka kay Doc,” they greeted. “We want to wish you all the best. You have our support, no matter what, we’re always behind you both. God bless, we love you.”

DJ Tony Toni has since tagged the crazy antic as the #CesarMontanoChallenge when he took to his Instagram to share in jest that he idolizes Montano.

Meanwhile, Montano has kept mum since the circulation of the viral video.  /ra

Cesar Montano resigns as Tourism Promotions Board chief amid scandal