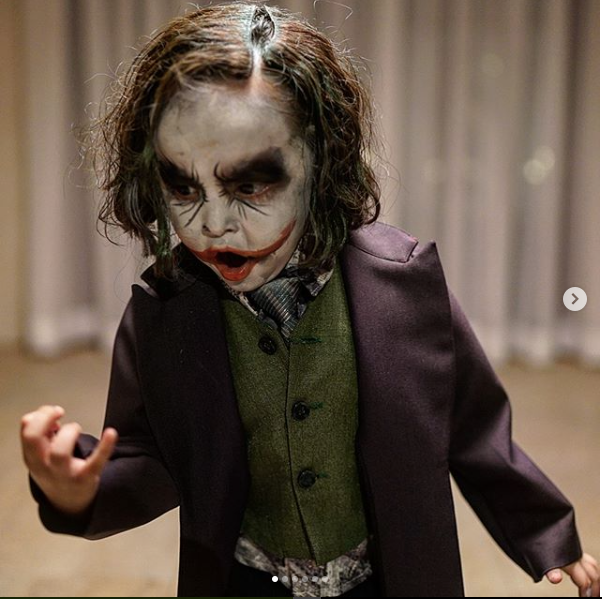 Halloween can’t get any cuter with these celebrities taking their kids’ costumes to the next level. This year, celebrity kids dressed as cute animals, movie characters, superheroes, princesses and many more.

My favorite is costume is always the one where I'm like Mommy. I really want to be like Mommy when I grow up. I think she's the cutest, smartest, most thoughtful and loving person in the whole world.

Little Scarlet also dressed up as Charlie Chaplin for school before Halloween.

My teachers in school awarded me the “best in eyebrow lifting” award. I know it’s not an important award, but it made my Daddy and Mommy happy when I told them… and to me that’s important. I hope I'm making you happy too.🤨 📸@marchenrichgo

Zia Dantes wowed netizens and celebrities for posing in character as Joker from DC Comics The Dark Knight.

The whole Dantes family strut the super villain look with Dingdong as The Riddler and Marian as Poison Ivy from the same American comic series.

This year, we decided to join the OTHER side. 👻🎃 #Halloween2018 #TeamDantes

Andi Manzano and GP Reyes’ three-year-old Olivia dressed up as the cutest Godzilla took over the streets of Tokyo with her irresistible cuteness.

My Baby Ozilla came out to play today 🦖😆💚

First born of Andi Eigenmann Ellie requested her mom to dress her up as a black cat for the third straight year! Andi shared that also she sew the costume herself.

It’s friendship day at school today, and (also because it’s halloween,) they were asked to come in whatever costume they prefer. I had tons of ideas in mind. (ie. the dinosaur from Toy Story since we still have the headpiece we got in Disney Land years back, cus it was available) But of course my fashionista kid will not go for “this should do” or anything store bought. Also, for the third year in a row, she is still very particular about going as. A. Black. Cat. And no it can’t just be cat ears with a black outfit like what i made her wear last yr. 😂 she has to have fur, paws, and. A. tail. Cant be a onesie as well because those are for babies, according to her. So I had to resurrect whatever was left of the sewing skills I gained from H.E.L.E. Class 10 yrs ago, and surprisingly, as a result, I created this masterpiece. I think she loved it. You’re welcome girl. I would like to thank Everland, Korea for the cat ears and @inglotph for using ingredients that vegan and eco friendly, and kid friendly as well!😀

Bangs Garcia, husband Lloyd Birchmore and their almost one-year-old baby Amelia all dressed up as giraffes for Halloween.

Happy halloween!!! Ready to save the world! (Ng naka shorts!!!😝)

Meanwhile, Lea Salonga’s daughter Nicole Chien dressed up as The Phantom from musical Phantom of the Opera.

When your kid wants to be The Phantom for Halloween!!! Costume gifted by Tito @rajolaurel, mask by Tito @jedmadelaofficial and make up was a joint effort by Nicole and me! Boomerang video by @timpavino!

Read Next
Radio hosts Sam YG, DJ Tony Toni parody Cesar Montano’s viral video
EDITORS' PICK
‘Justice will be done,’ Duterte assures as he vowed probe on Jolo incident to bare ‘truth’
Water remains our saving grace right now
DOLE: Return of OFWs’ remains from Saudi to be ‘delayed,’ deadline moved to ‘early next week’
Smart releases Hyun Bin’s second TVC
Current dominant strain of COVID-19 more infectious than original—study
EuroMillions Superdraw: A lottery draw unlike any other is coming to the Philippines
MOST READ
Duterte tells military: No other president looked at you the way I did
BREAKING: Duterte signs anti-terror bill into law
Locsin warns of ‘severest response’ if China’s army drills in SCS ‘spill over’ to PH domain
Groom dies as over 100 wedding guests test positive for coronavirus
Follow @KAguilarINQ on Twitter
Don't miss out on the latest news and information.