Daughter of Nancy Pelosi goes on a listening tour of America 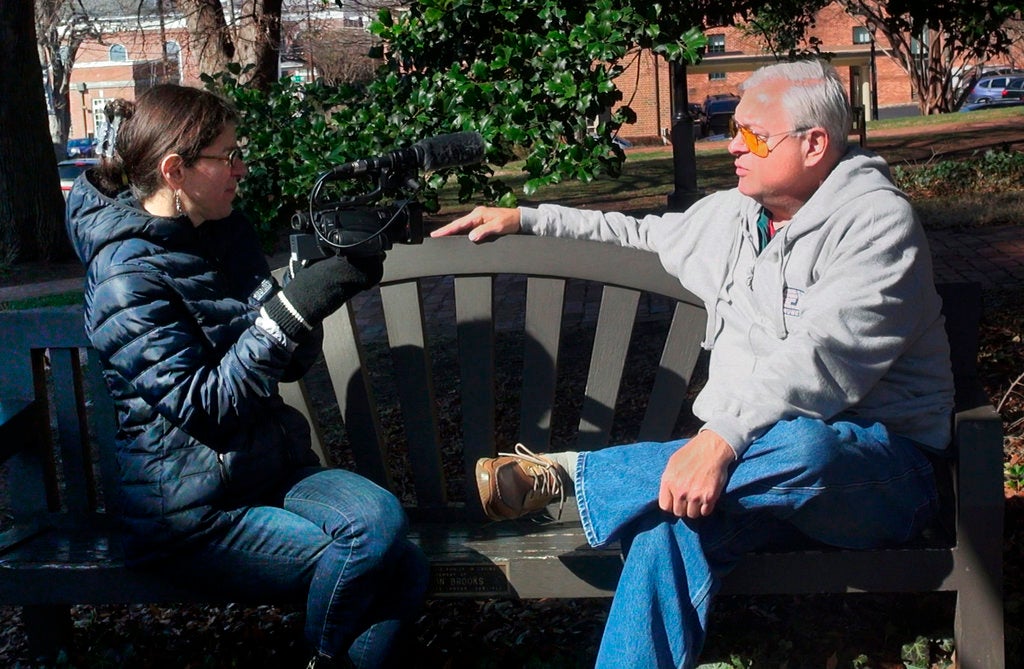 This image released by HBO shows director Alexandra Pelosi, left, as she interviews Barry Isenhower in Charlottesville, Va. for her documentary “Outside the Bubble,” premiering on Monday. Image: HBO via AP

NEW YORK (AP) — In the climactic moment of HBO’s documentary “Outside the Bubble,” a man who describes himself as a Trump warrior explains that he gave the nickname “Nancy Pelosi’s grandchildren” to masked demonstrators in Berkeley who beat him on the head with sticks.

So the filmmaker takes Ben Bergquam on a walk to a nearby beach where, playing in the sand, are the House Democratic leader’s real grandchildren.

It was, in a sense, what she hoped for in making “Outside the Bubble,” which premieres Monday on HBO — to connect people who might not ever speak to each other in a conversation, however brief. She’s not sure whether or not he knew at the time that she was Nancy Pelosi’s daughter; she sought her interview subjects by identifying herself as “Alexandra from HBO.”

In the course of her reporting, Pelosi visited the site of a mass shooting in Sutherland Springs, Texas; talked to coal miners in Pennsylvania; met church-going Trump supporters in Alabama; and sought out the opinions of people in the hurricane-decimated refinery city of Port Arthur, Texas. She took a family vacation to see the border wall.

One of the things Pelosi loves about where she lives in New York’s Greenwich Village is the diversity, and the freedom people feel to be themselves. Yet the things she loves about this country are the same thing that others believe is wrong about America.

“People who live in a liberal bubble do not have an understanding of this country,” she said. “I don’t think they spend enough time in America. If you live in New York City, you can’t say you live in America. Sorry, I know people will be offended by that.”

But in her bubble, “we read the New Yorker and we watch MSNBC and we think the whole world should think like we do, and they don’t.”

One of Pelosi’s sons is dressing up as a ghost of the Republican Party past for Halloween, wearing a skeleton outfit and mask of George W. Bush. The family has a fondness for Bush, since Pelosi won an Emmy and launched her career with the 2000 campaign documentary, “Journeys with George.”

Her kids also went to the United Nations to see the signing of the Paris climate accord, and were devastated when President Donald Trump decided to pull out of that agreement. That made her interested in visiting Port Arthur, where oil is king, and the mayor told her that struggling families didn’t have the luxury of worrying about global warming.

“I needed my kids to hear that, because if you think global warming is the most important issue affecting this country — and I do — then you haven’t been to a community (where people) cannot feed their families.”

There’s a risk, however, that liberal viewers of “Outside the Bubble” will see some of her interview subjects as stereotypes that may simply baffle them, like the coal miner who voted for Trump because he would save the industry and still supports him despite recently losing his job. A Port Arthur woman said that people who believe in climate change are advertising their ignorance. “Do you really want to live in horses and buggies instead of cars?” she says.

Pelosi said she was determined to show her interview subjects in their best possible light. She didn’t show people using hateful language, for instance, although some did during their interviews. It’s not in the interests of a Pelosi or HBO to make fun of Trump voters, she said.

While her latest journey may be a tough sell for some liberals, she also worries that Trump’s supporters will judge her by her last name and not watch.