Anywhere but Washington: Why DC stories rarely film in DC 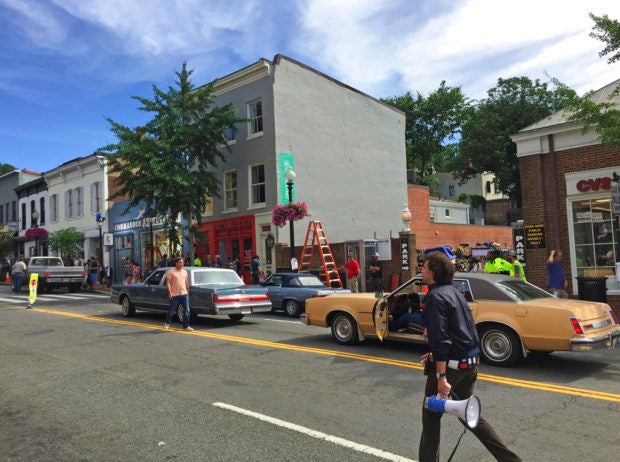 This image provided by Erin Aulov shows a scene on Wisconsin Avenue in the Georgetown section of Washington on June 14, 2018, during the filming of the new Wonder Woman movie. When the Wonder Woman sequel filmed in several locations around Washington this summer, it was a genuine novelty. In any given year, there are usually multiple movies and TV shows set in Washington, but very few actually do the bulk of their filming here. Image: Erin Aulov via AP

One of the most famous is the 1987 film “No Way Out,” where Kevin Costner escapes pursuers by taking a subway from Georgetown. No subway station has ever existed in the tony neighborhood. The opening credits of the new Amazon show “Jack Ryan” show the title character biking to work via a route that makes no geographic sense.

The reason for this disconnect is simple: Few TV shows or movies actually film in Washington. That’s something district officials are trying to change. They scored one success last summer with the filming of the Wonder Woman sequel in the district. And they have a high-profile ally in author George Pelecanos, who has set all 20 of his crime novels in the Washington area and is on a personal mission to turn the nation’s capital into a film hub.

But they have difficulties overcome. Other cities offer more generous tax incentives. Filmmakers say Washington can be a difficult place for them —the entire district is a no-fly zone for helicopters and drones. Those seeking film permits must sometimes contend with several overlapping police forces: the district’s Metropolitan Police, National Parks Service police, the United States Capitol Police and the Secret Service.

So Washington-centric series like “House of Cards” or “Veep” typically come to the District just to shoot what locals call the “postcard shots” of the monuments or the White House, then do their principal filming elsewhere. “The Americans” was set in Washington, but filmed in Brooklyn; “NCIS” has been set in Washington for 16 seasons, but fakes the district in southern California. “The Post” was filmed in Brooklyn and “Lincoln” was filmed in Richmond, Virginia — the capital of the Confederacy.

But Angela Gates, director of Washington’s Office of Cable Television, Film, Music and Entertainment, feels like the district is on a roll after the “Wonder Woman” shooting.

“That says a lot about how far we’ve come,” Gates said. “When you do a project well, word of mouth starts to get around.”

Gates said 2016 was a turning point. That’s when Mayor Muriel Bowser reinstituted Washington’s dormant tax rebate program. A production spending more than $250,000 (around P13.4 million)  filming in the district can apply for a rebate of up to 35% of taxable expenditures, with further incentives for hiring local residents. Her office also helps secure permissions from law enforcement.

“We have a seat at the table now,” Gates said. “These are game-changing times for us.”

Pelecanos’ support has also helped. His popularity is surging due to his work as a writer on “The Wire.” Now he’s the executive producer of the HBO show “The Deuce.” He recently completed an independent film, “DC Noir,” based on his stories, and made a point of filming in all eight of Washington’s wards.

“The city’s beautiful, and it hasn’t really been exploited yet,” said Pelecanos, who grew up just outside the district in Silver Spring, Maryland, but regularly came into Washington to work in his father’s diner.

Pelecanos recalls many inaccuracies in Washington-based movies and shows, but he has a particular peeve about fire escapes. It bothers him when movies purportedly set in the district show apartment buildings with New York-style zigzag escapes.

“Baltimore or New York can look like D.C. to anybody but Washingtonians,” said Kyle David Crosby of Pictureshow Productions, who worked on “DC Noir.”

Vans Stevenson, senior vice president for state government affairs for the Motion Picture Association of America, said Washington’s rebate funding is dwarfed by most of its rivals.

“They’ve put some money in it, but it’s still not competitive,” he said.

Still Stevenson said Washington has “a wonderful track record” and enjoys “a good reputation of being able to accommodate productions.”

Crosby said the difficulties of filming in Washington are often exaggerated. It can sometimes take a little longer to secure permission, but generally the process works. However certain sites like the Vietnam Memorial are off-limits and, “You’re not putting a camera crew on the steps of the Capitol ever. You’re just not,” he said.

Crosby said local filming increased after the tax rebates were reinstituted, with movies like “Jackie” and “Spider-Man: Homecoming” filming there. But he describes a chicken-and-egg problem: there’s a shortage of specialized equipment because there aren’t enough productions to justify keeping them in Washington.

“For now if you’re going to do a major project here, you’re bringing most of your trucks from outside,” he said.
The same goes for behind-the-camera talent and technical crew. Crosby describes the local talent pool as wide, varied and accomplished, but not particularly plentiful.

On “DC Noir,” Pelecanos said he employed 60 interns from Howard University’s film department to give them professional experience. Chadwick Boseman, the “Black Panther” star, is a Howard graduate, as is Bradford Young, the first black cinematographer to be nominated for an Oscar for 2017’s “Arrival.” But Howard assistant professor Jami Ramberan said the lack of local work is “a huge reason that many of our students leave.”

Pelecanos said productions like the “Wonder Woman” sequel boost Washington’s reputation, but what would really help the city is television.

“What you need is an ongoing series that lasts for five or six years,” he said. “We need to get it to the point where people are working all year long for many years.”

Attracting those projects often comes down to money. Pelecanos said that unless you’re a location ideologue like him, the production incentives generally determine filming locations.

Pelecanos recalls pitching a film based on his novel “Hard Revolution,” which depicts the 1968 riots after the assassination of Martin Luther King Jr. where large swaths of Washington were set ablaze.

The deal didn’t go through. MKH