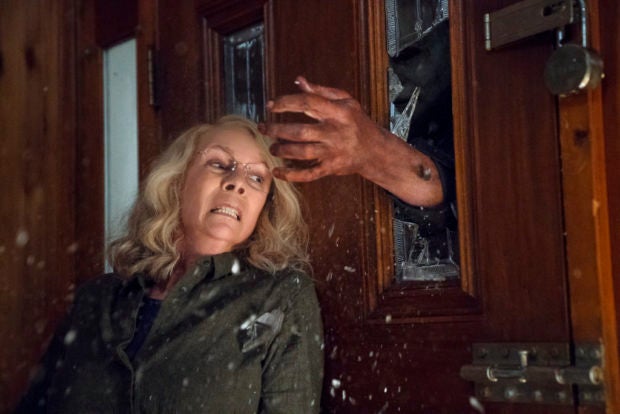 This image released by Universal Pictures shows Jamie Lee Curtis in a scene from “Halloween,” in theaters nationwide on Oct. 19. AP

That strong three-day number gave the film the second-best opening ever for an October, trailing only “Venom,” which earlier this month booked an $80-million opening, according to HollywoodReporter.com.

Universal executives could be excused for a bit of gloating — they produced “Halloween” for a microscopic $10 million.

“Halloween” recounts the return of a homicidal masked figure (Nick Castle) 40 years after he set off on a bloody Halloween night killing spree. Jamie Lee Curtis again stars as Laurie Strode, sole survivor of that spree.

Holding tight in second spot was Warner Bros.’s musical drama “A Star Is Born,” with ticket sales of $19.3 million.

The film, the third remake of a 1937 movie, was directed by Bradley Cooper. He plays a hard-drinking musician who falls in love with a young singer (Lady Gaga), only to see her star rise as his plunges.

Sony’s “Venom” was not far behind, taking in $18.1 million as it approaches $500 million globally. Tom Hardy stars as a journalist who becomes the super powerful host for an alien creature.

In fourth was another seasonal offering, Sony’s “Goosebumps 2: Haunted Halloween,” at $9.7 million. The family-friendly sequel, based on the R.L. Stine children’s books, stars Wendi McLendon-Covey and Madison Iseman.