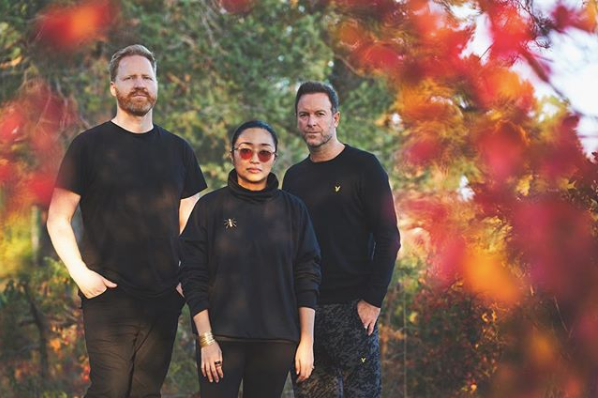 D’Sound and Armi Millare of Up Dharma Down have released a music video for the song “Lykkelig” (“happy” in Norwegian) on Friday, Oct. 19.

The Norwegian pop band, known for its jazzy sound, consists of Jonny Sjo on bass, Kim Ofstad on drums and percussion and Mirjam Omdal on vocals.

The video complements the song’s upbeat melody with a relaxing backdrop of autumn foliage, as seen in Sjo’s home outside of Oslo. It features Millare singing along with Sjo and Ofstad in what looks to be a laid-back jamming session.

A video Millare shared last September shows Sjo struggling to pronounce the lyrics in a recording studio last year. She commended him for his effort: “Excellent [pronunciation] by Jonny @yosjo — he learned the words within the span of [two] hours.”

15 September 2017 . Excellent pronounciation by Jonny @yosjo – he learned the words within the span of 2 hours. 👏🏻👏🏻👏🏻 my dreams of having the rest of the world learn our language through music are slowly coming true ☺️ I had no idea they were so open to it. What an honor. @Kimofstad @dsoundofficial @daworksrecords #HanggangUmaga #Lykkelig #lykkeligdsoundarmi

Another video shows Millare going through the lyrics with Sjo, with him flawlessly following along with the song lyrics and both enjoying the moment.

Just found this video from October last year in @whiteroommusic with @armimillare teaching @yosjo how to sing the Filipino words on Lykkelig. Excuse Kims laughter in the end! He was so happy! #lykkelig

The UDD vocalist told Bandwagon that she wrote the lyrics last year on a visit to Oslo. While working on the track with D’Sound, she sang along to it in gibberish. This prompted Ofstad to suggest that she write it in Tagalog.

The lyrics are published on Millare’s Instagram, as seen below.

While it’s dedicated to Filipinos around the world, Millare told Bandwagon that she hopes other nationalities would sing in Tagalog too.

Millare performed alongside D’Sound for the first time in an Oslo show last Oct. 10. “Lykkelig” was released on Oct. 5. JB