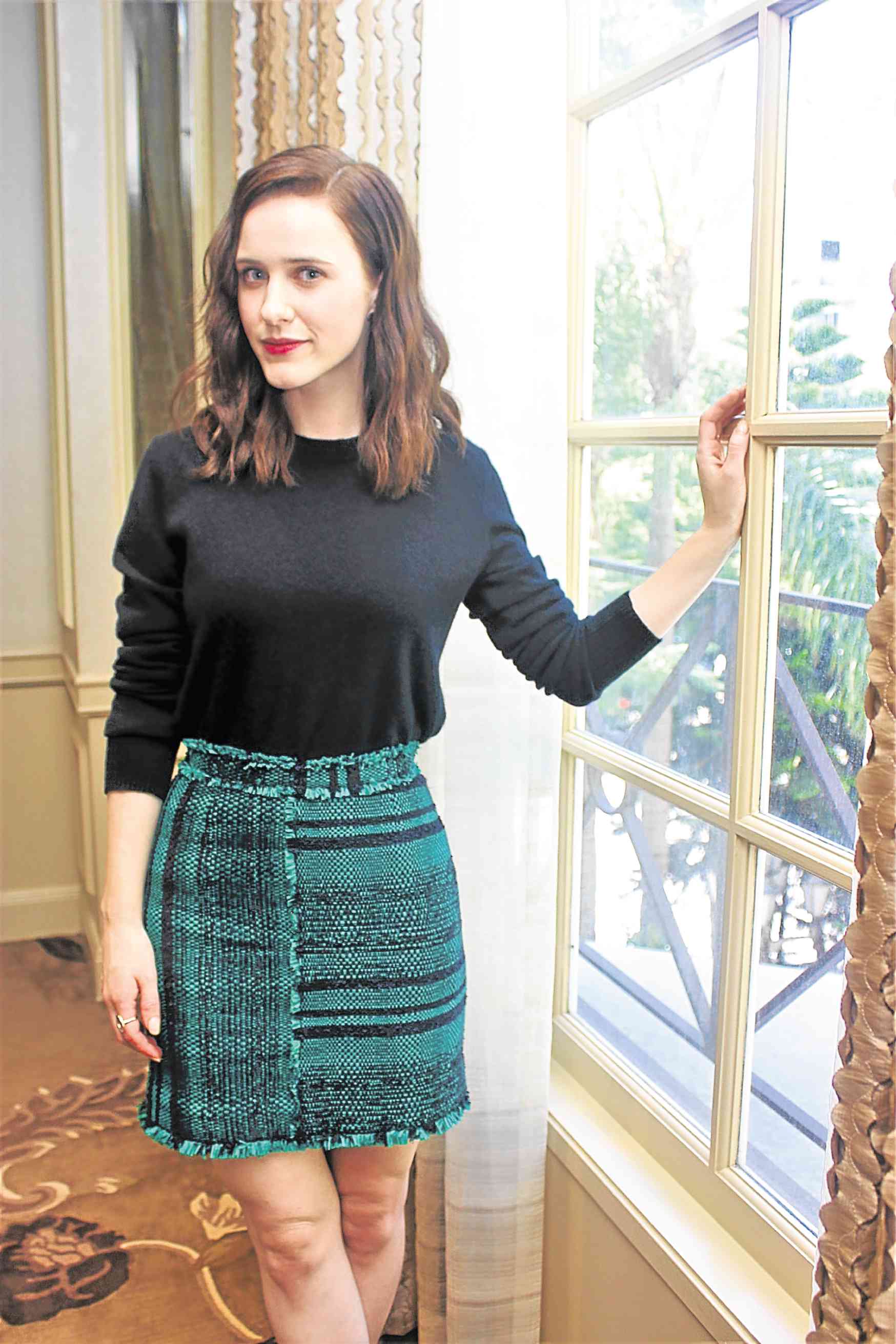 LOS ANGELES—She is television’s marvelous new favorite—Rachel Brosnahan was crowned best actress-comedy or musical both by the Golden Globe Awards early this year and the Emmy Awards last month.

All thanks to her show, “The Marvelous Mrs. Maisel,” in which she endearingly plays the title role, a 1950s New York housewife whose middle-class life is turned upside down when her husband leaves her, leading her to find out that she has talent for stand-up comedy.

While the show is set in the ’50s, the journey of Rachel’s Midge Maisel as she finds her voice is relevant today as women fight for equal pay and opportunities, and demand a stop to sexual harassment and abuse.

But more than anything, the series is an excellently written comedy by its creator, Amy Sherman-Palladino, who also directs. The script is razor sharp, even dropping “Bataan Death March” in one of the show’s many memorable lines. It was no surprise that the show also romped away with the Golden Globe and Emmy best comedy or musical trophies this year.

In person, Rachel, whose credits include “House of Cards” (she played Rachel Posner), is just as charming as Mrs. Maisel. Beaming, she announced that the show has been confirmed for a third season. As we write this, Amazon Studios has not yet announced the premiere date of Season 2, but Rachel shared some details.

“Season 2 mashes Midge’s worlds up against each other,” said the 27-year-old actress. “Midge is a mother, housewife, daughter, a working woman and a budding stand-up comedian. All of those worlds were completely separate in Season 1. Season 2 will look at the ways in which they combine.

“In Season 1, everything’s exciting, new and shiny. She’s finding her voice, and it feels good to let it out.

“In Season 2, you’ll watch her grapple with what it means to be a stand-up. It’s a dark, dingy world sometimes, and it’s a male-dominated one.”

On what she likes about the show, Rachel said, “One of the things I love the most is how many different reasons people have for connecting to the show. One of which is certainly that it’s about a woman breaking barriers. She’s a product of her time. She loves being a perfect housewife and mother.

“When her life falls apart, she starts to realize that maybe there are other dreams to be had. She notices and questions the double standards that separate men and women.”

“Midge and I are both resilient and ambitious, and we keep our circle close,” the Milwaukee, Wisconsin, native said, pointing out shared traits. “Family and friends mean a great deal. I think Midge is funnier than I am (laughs). She has this unshakable confidence that feels nearly impossible to grasp.

“One of the things that I find frustrating about her is her privilege. Some things are all so new to her because she’s been blinded by privilege. But I appreciate that in addition to having this innate sense of self-empowerment, she’s also insatiably curious, and she’s interested in learning.”

Asked what is marvelous about her in real life, Rachel laughed as she answered, “I’m marvelously terrible at cooking. And marvelously working on getting better. I am a marvelous dog mother. I have two dogs, a pit bull and a shiba inu, that I love very much.”

Regarding her romantic life, she would only say, with an enigmatic smile, “I’m in a long, happy relationship.” There are reports that Rachel secretly married her boyfriend, Jason Ralph, early this year.

In the series, Midge moves back to her parents’ house after her husband splits. But she doesn’t see herself being able to live with her own parents again. “Oh, goodness. Nope,” she admitted with a smile. “I adore my parents, but it would be best for all parties involved if we didn’t live together again. I definitely had some teenage angst, and I was not the most delightful person to live with for a certain period of my life.

“But, it’s been nice to become an adult, to have my own life and career and get to know them in a whole new way. I feel like we can have conversations we never had before.”

Rachel described how her growing up years in a sports-oriented family in Illinois helped prepare her for the challenges of breaking into the tough field of acting. “I snowboarded and wrestled when I was growing up and somehow made a move into acting. My parents encouraged me to chase this impossible dream and instilled in me a good work ethic.

“They’re relieved beyond belief that I’m not doing theater in a basement unless it is my choice,” added the Tisch School of the Arts alum. “And that I’m no longer waiting tables. Their largest reaction is mostly relief, that this dream that is supposed to be impossible is turning out to be going quite well.”

Rachel laughed when asked if she gets to take home some of the fabulous ’50s costumes that Midge wears. “That’s what everyone wants to know. I’m going to steal all of the coats. For better and for worse, I’m still learning how to walk in heels.

“We have our incredible costume designer, Donna Zakowska, who continues to push the envelope. Costumes are a big asset. They aid the transformation. I feel completely transformed when I walk onto set.”

On the shocking death by suicide of her aunt, designer Kate Spade, Rachel said, “It’s been very challenging. Obviously, we’re devastated. There’s no one way to go about it. We’re moving through it as a family and trying to lift each other up, quietly and privately.”

As for winning the Golden Globe, she remembered it as a “surreal” moment. “I wasn’t expecting that at all because the show had just aired. Most people were like, ‘What the f**k is ‘The Marvelous Mrs. Maisel’?’ They checked it out because the Golden Globes said it was worth checking out.

“I didn’t know that my category was that early in the show. Carol Burnett, Jennifer Aniston and Steven Spielberg had just talked to me. I was still recovering from that. I just panicked mostly. I was trying not to trip. That was all I was focused on. So, I freaked out. Clearly, I’ve not recovered from that moment.”

Breaking into a grin, she said, “I have another shiny thing (Emmy Award trophy) and I don’t know what to do with them. Like, where do people put them? OK. See, I’m a pro already.”

Rachel is set to conquer the big screen, as well. She’s excited to shoot director Dominic Cooke’s “Ironbark,” a Cold War spy drama, with Benedict Cumberbatch. “I’ll be heading to London to work on the film for the next couple of months.” She has also completed another drama, “Change in the Air.”

“And I’m venturing into producing. I executive produced a short film with a dear friend from college. And we’re working on turning that into a series. I’m hoping to move further in that direction.

“I’m hoping to use this wonderful platform that the show has given me to be able to learn new things.”