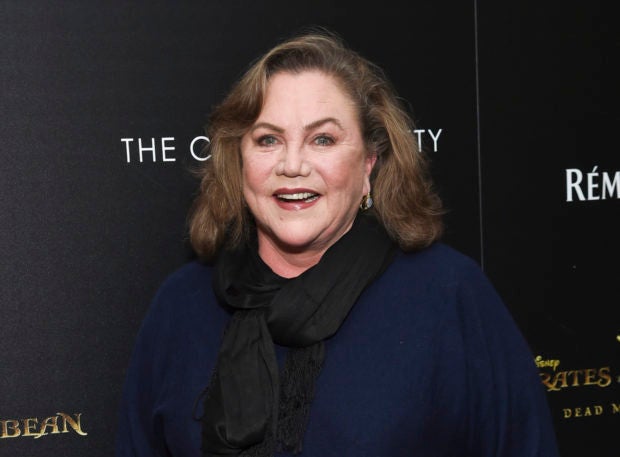 In this May 23, 2017, file photo, actress Kathleen Turner attends a special screening of “Pirates of the Caribbean: Dead Men Tell No Tales”, in New York. Turner will make an unexpected Metropolitan Opera debut in Donizetti’s “The Daughter of the Regiment” in the non-singing role of the Duchess of Krakenthorp. She will appear in seven performances of the comic opera from Feb. 7 to March 1. Image: Invision/Evan Agostini via AP

NEW YORK (AP) — One of acting’s most distinctive voices will make an unexpected Metropolitan Opera debut.

Kathleen Turner, known for words that smoke rather than shimmer, is joining the cast of Gaetano Donizetti’s “The Daughter of the Regiment” in the non-singing role of the Duchess of Krakenthorp, the Met said Thursday.

She received an unexpected email this summer from Met general manager Peter Gelb proposing the idea. Asked to describe her voice, Turner terms it “kind of baritone.”

“Peter says I’m one of the few women he knows who can sing ‘Ol’ Man River’ in the original key,” she said during an interview Wednesday with her distinctive, throaty laugh.

An Academy Award- and Tony Award-nominated actress, the 64-year-old Turner will appear in seven performances of the comic opera from Feb. 7 to March 2, the last televised to movie theaters around the world in high definition.

“La Fille du Regiment” is sung in French and stars soprano Pretty Yende in the title role of Marie, tenor Javier Camarena as Tonio (who sings the famous aria “Ah! mes amis” with the nine high Cs) and mezzo-soprano Stephanie Blythe as the Marquise of Berkenfield.

The Duchess enters imperiously at the start of the second act to arrange a marriage between her nephew and Marie.

“I was thinking of interesting, bigger-than-life personalities, and Kathleen came to mind, Gelb said.

“I don’t understand. Why do you need me?” Turner recalled telling Gelb. “I said, ‘Well, send the libretto. Let me read it out loud.'”

She went to the Met in August, walked the stage, fell in love with the acoustics and agreed. Gelb said it has not been determined whether she will speak in French, English or a combination. Turner doesn’t think she will attempt to ad-lib.

“I don’t think I would have that much courage,” he said.

Turner received an Academy Award nomination for “Peggy Sue Got Married” in 1997 and Tony nominations for Tennessee Williams’ “Cat on a Hot Tin Roof” in 1990 and Edward Albee’s “Who’s Afraid of Virginia Woolf?” in 2005.

She first sang publicly in 2014 during Bertolt Brecht’s “Mother Courage and Her Children” at the Arena Stage in Washington, D.C. She launched a cabaret show, “Finding My Voice”, at Feinstein’s at the Nikko in San Francisco last October, took it to The Other Palace in London in April and then New York’s Cafe Carlyle in May.

The Duchess has seen star turns of retired and semiretired singers, actors and even a famous jurist.

Ljuba Welitsch, then 58, performed the role at the Met in 1972 alongside Joan Sutherland and Luciano Pavarotti, tenor Andrea Velis filled the role in 1983 and Emmy Award-winning actress Bea Arthur in 1994. Actress Marian Seldes took over when the current Laurent Pelly staging first came to the Met in 2008 and was replaced two years later by 66-year-old soprano Kiri Te Kanawa.

Turner has attended opera occasionally and cites Georges Bizet’s “Carmen” as among her favorites.

“I used to go more often. I can’t say I’m honestly a huge fan,” she said. “Before Peter, I couldn’t understand the acting — or lack thereof. That just upset me. But that has changed considerably.” CC

Kathleen Turner opens up about battle with illness