Once vowing not to record anymore, Elvis Costello is back | Inquirer Entertainment
Close
menu
search

Once vowing not to record anymore, Elvis Costello is back 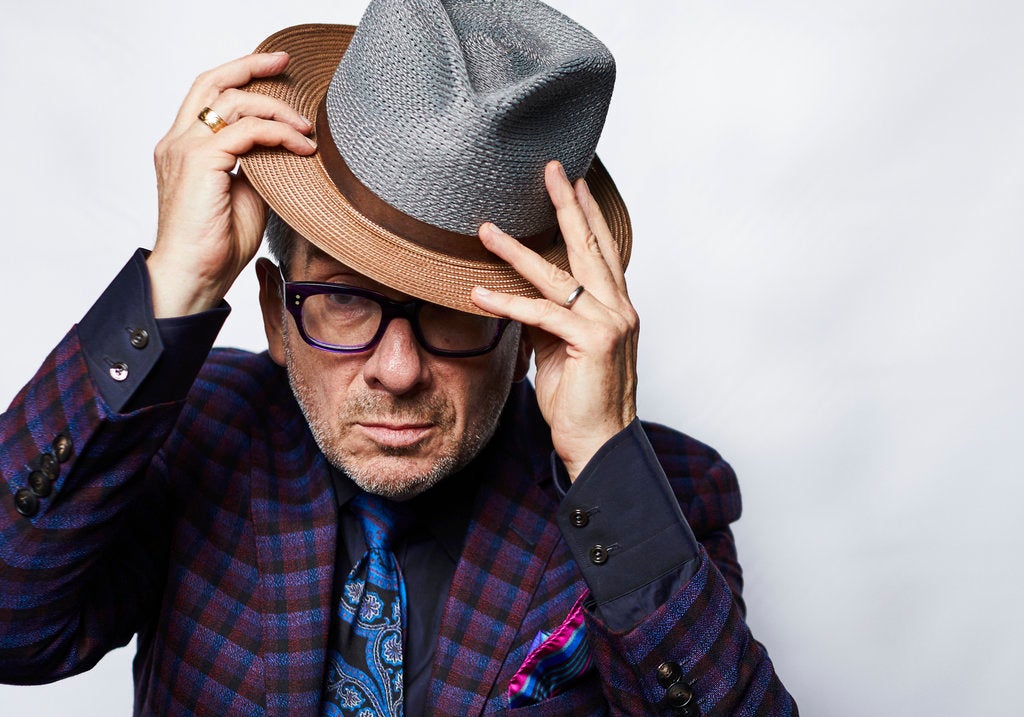 NEW YORK (AP) — Besides the fact that he’s still here, Elvis Costello’s fans can be grateful that he’s open to changing his mind.

While something short of a vow, Costello said in 2010 that he didn’t plan to record anymore. Yet on Friday, he releases “Look Now,” his second disc since that declaration. The lush showcase for his backing band, the Imposters, is musically inspired by Dusty Springfield’s “Dusty in Memphis” and has a renewed collaboration with Burt Bacharach at its heart.

That Costello, 64, is around to talk about it is because he was treated for what was described as a small, but aggressive form of cancer earlier this year. The world learned about it, somewhat to his regret, when he had to cancel some concerts.

The changing music business had taught Costello, like other older artists, that there was a diminishing return to recording.

“I didn’t feel like I could justify the vanity of making records, compared to making my living with what I do most of the time, which is do shows,” he told The Associated Press. “Up until that point, it had always been that (recording and touring) were connected, and it was just finding a way to disconnect them again.”

Thus began his “impresario years.” He’s had a handful of themed concert tours, including one focusing on the period around his “Imperial Bedroom” album and another accompanied by a game show-like “spinning songbook” that determined the evening’s set list.

He didn’t stop writing, however, much of it aimed toward theater. He and the 90-year-old Bacharach, with whom he made the 1998 record, “Painted From Memory,” are working on a stage show.

While waiting for that to progress, longtime drummer Pete Thomas encouraged Costello to record some of the new material that had backed up. Costello recognized that his three-piece band had never really shown its range on a single CD, and concentrated on the garage band side of his diverse catalogue while in concert.

The work on “Look Now” is ballad-heavy and lightly soulful, with plenty of space for the rhythm section of Thomas and Davey Faragher, the keyboards of Steve Nieve, orchestration and backing vocals. This was his original idea for a follow-up to “Painted From Memory” years ago, although Costello didn’t get to it. He said it benefits from the extra time and experience.

“Do we sound like we’re old?” he said. “No, we sound like we know what we’re doing and are alert to the possibilities. We could play it a lot of ways but we decided to play it like this.”

He said he’s “tremendously happy that I went in and did it with these guys.”

The songs, which include a 20-year-old collaboration with Carole King, tell typically complex stories: a woman stripping wallpaper and reflecting on a failed relationship, a rich woman who disdains the former lover hired to paint her portrait, a woman whose childhood memories are haunted by her father’s infidelities. In three of the songs, he sings from the perspective of a female narrator.

Another highlight is “Unwanted Number,” a song he wrote for the female band For Real in the 1990s, about a woman deciding to raise a child born from a youthful relationship. He subtly rewrites the song to deemphasize the childhood abuse she suffered at the hands of her father and put more focus on her choice to raise the baby.

Material written with Bacharach — most notably “Photographs Can Lie” and “He’s Given Me Things” — set the record’s tone.

Costello said he and Bacharach haven’t given up on Broadway. It’s just a question of securing the financial backing.

“Look Now” had been delayed for release after an agreement with one record company fell through. Costello notes ruefully in an essay that he couldn’t shake the thought that “such minds had determined my value long ago and might wait out the windfall should I become a posthumous artist, although that was a career opportunity I was unprepared to pursue just now.”

Fans were shaken by the thought that might come sooner rather than later when they heard of his cancer scare. He had tried to push through with concert dates, despite a doctor’s advice, and found he wasn’t physically ready. Cancelling the shows required an explanation, but Costello winces at how it escaped his control. Unfounded speculation that he was at death’s door upset his family.

“I had some very nice messages from people I’ve never met or saw on the street saying very nice things about me,” he said. “And, of course, there are one or two who say, ‘I never liked him anyway, I hope he dies.'” AB

Read Next
Nadine Lustre, Kiana Valenciano open up on dealing with anxiety, depression
EDITORS' PICK
PH importing sugar after all: Marcos okays 150,000 MT
Supply of white onions gone since July, growers say
Bakers’ turn: P4 hike on bread prices sought
What to watch out for when selecting a video surveillance solution
vivo brings to the Philippines a powerful smartphone with a slimmer body, the vivo Y02s for only PHP 6,499
House energy committee chair Arroyo bats for cheap electricity
MOST READ
LOOK: Miel Pangilinan dazzles in glittery pre-debut shoot
DepEd to give teachers P5K cash allowance within first week of classes
Suspect in rape-slay of teenaged biker arrested in Camarines Sur
Mayor bares issues vs closed QC school
Don't miss out on the latest news and information.