Franco and Ayen Laurel to perform in first-ever concert together 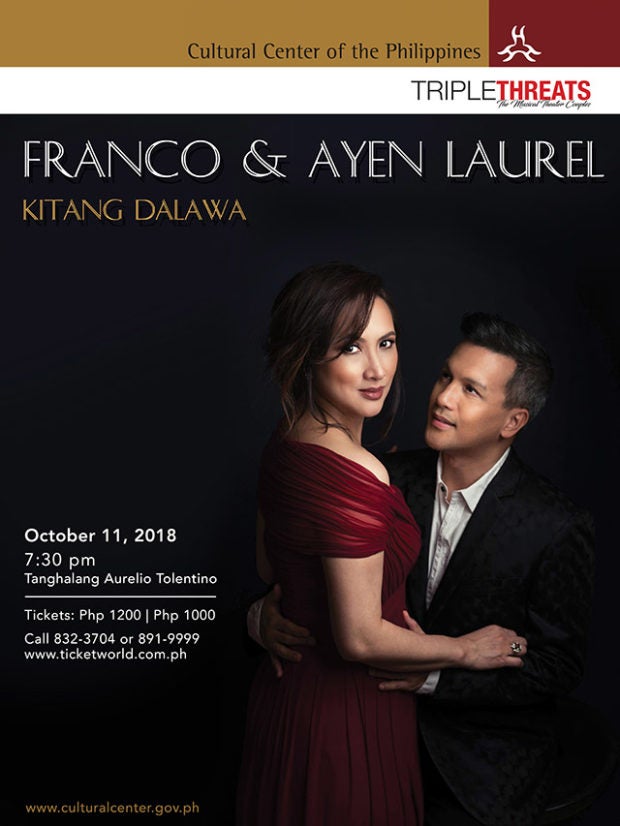 Couple Franco and Ayen Laurel will perform in their first concert together, billed as ‘Kitang Dalawa,’ at the Cultural Center of the Philippines’ (CCP) Tanghalang Aurelio Tolentino on Thursday, Oct. 11.

Their repertoire covers a wide range of musical genres from Broadway to original Pilipino musicals. They will also share with the audience their forays into pop, jazz, gospel and kundiman.

Joining them in the concert are their children Mariella Laurel, Hasan Bolkiah, and Angia Laurel.

There will also be special participation from Cecile Martinez, Joni Galeste, and Jourdan Bartolome.

The Laurel couple met in 1999 when Ayen produced the musical “Rama at Sita” at the University of the Philippines Theater and Franco played the character of Bharata.

Since then, both of them have appeared in various memorable theater productions and have been recognized with multiple awards for their work.

Married for almost 18 years now, the concert would be a celebration of the couple’s best moments in their lives as  artists, soul mates, parents and friends.