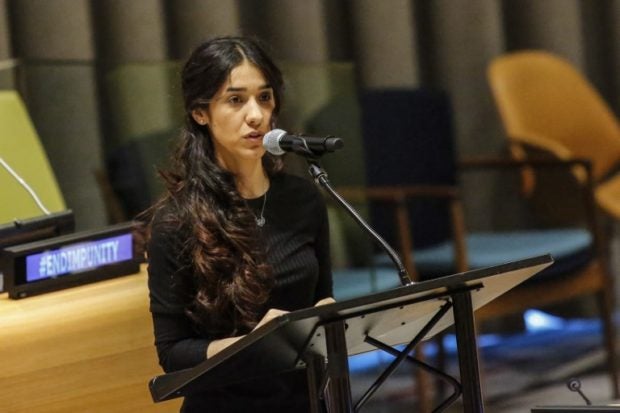 (FILES) In this file photo taken on March 9, 2017 Yazidi human rights activist Nadia Murad speaks as she attends ‘The Fight against Impunity for Atrocities: Bringing Da’esh to Justice’ at the United Nations Headaquarters in New York. Image: AFP photo/Kena Betancur

In the soon to be released documentary “On Her Shoulders”, Nobel Peace Prize winner Nadia Murad says she didn’t want to become known as a “victim of Daesh terrorism.”

Murad, 25, a member of Iraq’s Yazidi minority who was enslaved by the Islamic State group, on Friday won the coveted award along with Congolese doctor Denis Mukwege.

They were honored for their work in fighting sexual violence.

Murad’s painful work speaking out on behalf of her community is chronicled in Alexandria Bombach’s film, which won the Directing Award for U.S. Documentary at the 2018 Sundance Festival.

“I would like to not have to tell people what happened to me… I would like them to know me as a top dressmaker or an excellent athlete or an excellent student, a makeup artist or farmer,” Murad says of her broken dreams in the film, which will open in US theaters on October 19.

From Canada’s Parliament to Germany and refugee camps in Greece, Bombach followed Murad for three months in 2016 on her long and difficult journey to tell the world what her community and she herself suffered as a sex slave of IS, also known by its Arabic acronym Daesh.

“On Her Shoulders” refers certainly to Murad’s struggle as spokeswoman for her Kurdish-speaking minority — which the United Nations says was subjected to IS genocide — but even more so to Murad the woman herself.

Though bruised, she can still smile, play with a supermarket shopping cart, and worry about her hair.

“Representing her as a human being was important, and I think she enjoyed seeing herself in the movie as someone who lives a normal life,” Bombach told AFP.

The U.S. director chose to refrain from all commentary to better allow Murad and those close to her to talk.

Bombach confessed it was sometimes “very depressing” to consider what Murad faced, with very intimate and clinical questions from some media about what IS subjected her to.

“I think the film is for Nadia, and for the Yazidis, but it’s a film about us, about everyone outside the Yazidis because it makes us reflect on our own apathy, and empathy,” Bombach said.

Murad told the U.N. two years ago that she wasn’t brought up to give speeches or address heads of state, but “everything changed” after the invasion of her village by the jihadists on August 3, 2014.

Murad was among thousands of Yazidi women and girls abducted, raped and brutalized by IS.

After her escape, Murad was named a U.N. ambassador for victims of human trafficking.

“They say that I am a militant… but basically I see myself as someone who is worth nothing, reduced to a slave for no reason,” she tells Bombach’s camera.

The day that “the terrorists” are brought to justice, “then I will be worth something,” she adds. MKH