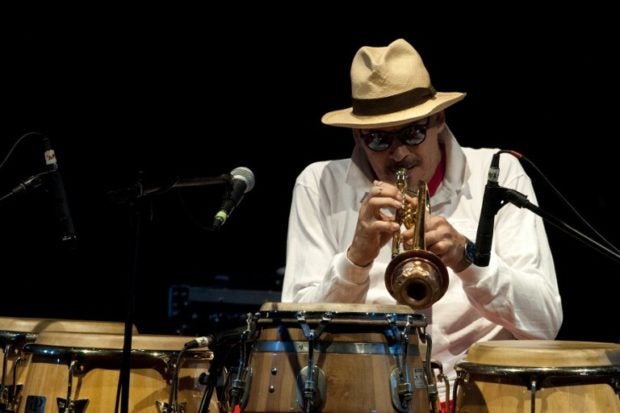 (FILES) In this file photo taken on September 11, 2014 US trumpeter Jerry Gonzalez and the “El Comando de la clave” perform during a concert in the “Ajazzgo Festival 2014” at Enrique Buenaventura Municipal theatre, in Cali, Colombia. Jerry Gonzalez, the U.S. Latin jazz trumpeter and percussionist who played with The Beach Boys and Dizzy Gillespie among others, died on October 1, 2018 in Madrid. The jazzman, a reknowned conguero — a player of the tall, narrow conga drum — passed away aged 69 after suffering a cardiac arrest in a fire in his home in the Spanish capital. Image: AFP photo/Luis Robayo

Jerry Gonzalez, a U.S. Latin jazz trumpeter and percussionist who played with The Beach Boys and Dizzy Gillespie among others, has died, his music label said Monday, after a reported fire in his Madrid home.

“The Sunnyside family is grieving today as we have lost our beloved friend and inspiration, the great Jerry Gonzalez,” Sunnyside Records tweeted.

“For over three decades, Jerry has been a constant joy in our lives through his music, his friendship and his undeniable spirit. We will miss him dearly.”

The jazzman, a renowned “conguero” — a player of the tall, narrow conga — passed away aged 69 after suffering a cardiac arrest in a fire in his home in Madrid, Spanish media reports said.

A spokesman at Madrid city hall told AFP a 69-year-old man had been transported to hospital suffering from smoke inhalation, but was unable to confirm his identity. He reportedly died in hospital.

Gonzalez was raised in a musical household in New York’s Bronx, with his father singing in various local Latin bands during the 1950s and his uncle playing guitar, according to Sunnyside Records.

He started playing the trumpet aged 12 and later took to the conga in jam sessions on tenement rooftops, in the streets and in parks, particularly Central Park.

He got a scholarship for the New York College of Music and went on to have a prolific career, said his label, which described him as “one of Latin music’s most powerful and innovative congueros.” MKH