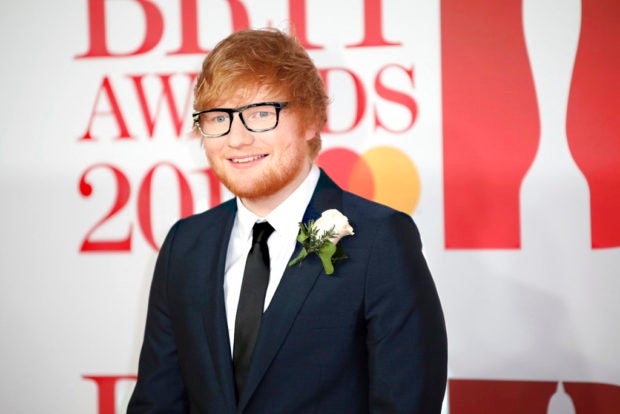 FILE – In this Feb. 21, 2018 file photo, singer Ed Sheeran poses for photographers upon arrival at the Brit Awards 2018 in London. Sheeran and his fiancé stopped in at Tommy Sullivan’s Cafe in Branford, Conn., following a wedding Friday, Sept. 28. Pub owner Maeve Sullivan says the “Shape of You” singer ordered a beer before he was joined by others from the wedding party. (Photo by Vianney Le Caer/Invision/AP, File)

BRANFORD, Connecticut  — Staff and patrons at a Connecticut pub got a thrill recently when British singer-songwriter Ed Sheeran stopped in for a pint of Guinness.

The New Haven Register reports that Sheeran and his fiancé hung out at Tommy Sullivan’s Cafe in Branford following a wedding Friday night. Pub owner Maeve Sullivan says the “Shape of You” singer ordered a beer before he was joined by others from the wedding party.

A smiling Sheeran snapped a picture with Sullivan and two bartenders. The bar owner says the Grammy-winning singer had “a good time hanging out” at the Irish pub and was “very nice and polite” to everyone who asked for pictures.

Sullivan says Sheeran is the first star to visit the pub and she plans to hang the picture on the wall. MKH