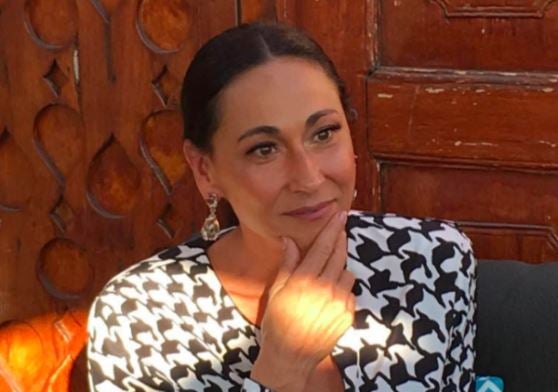 Liza Soberano recently shared on social media a photo of her with rumored boyfriend Enrique Gil during the glittering ABS-CBN Ball held last Sept. 29 at the Makati Shangri-La hotel.

In their glamorous photo shoot, Soberano can be seen wearing her Alexander McQueen gown featuring hand-applied sequins, beads and flower embroidery. She sat on the floor, leaning on the inside of Gil’s left thigh as Gil sat back in a velvet chair.

The sultry look was a hit among LizQuen fans, as they took to Soberano’s post to offer their fervent support. Veteran actress Cherie Gil, too, took to the comments section to give her sentiments regarding the photo.

“Lovely my reel life children,” Cherie wrote. “But next time, YOU sit on the chair while he lays and kisses the ground you step on. #slay. Wouldn’t that be more endearing? #morewiththetimes.” 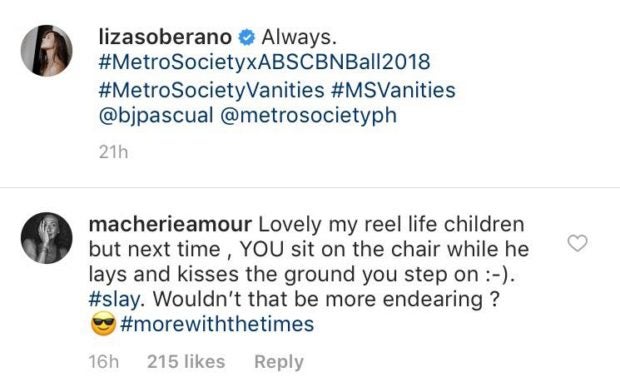 Many netizens liked Cherie’s comment, seemingly echoing their own thoughts regarding the photo.

“Haha. I ain’t no preacher,” Cherie wrote back. “But should I choose to, I think I’ve grown in years to have the right to. Nothing wrong in sharing my thoughts is there?”

Haha. I ain’t no preacher. But should I choose to, I think I’ve grown in years to have the right to . Nothing wrong in sharing my thoughts is there ? https://t.co/JfkEVXcQRc

Other netizens gave their own take and took to Cherie’s tweet to give their opinion. Some LizQuen fans, too, appreciated Cherie’s comments because they know she only means well.

“I agree that women are queens that should be adored,” wrote a certain Jasten (@infernalgleek). “But they also have the choice on where they want to be.”

“We certainly think there’s nothing wrong in sharing your thoughts madam,” wrote another (@Forever_Ville). “When it comes to LizQuen, we know you mean well and you are just lovingly giving them a piece [of] your heart and mind.”

we certainly think there's nothing wrong in sharing your thoughts madam..when it comes to LizQuen we know you mean well and you are just lovingly giving them a piece if your heart and mind.. 😉 just love love love

Cherie starred in the Philippine romantic drama teleserye “Dolce Amore” with Enrique and Soberano back in 2016. In the series, Cherie played the role of Luciana Marchesa, the adoptive mother of Serena (Soberano) and Tenten’s (Enrique) biological mom. It’s clear, however, that Cherie’s mother role to the two goes beyond the screen, as she continues to care and look out for them even in real life.  /ra