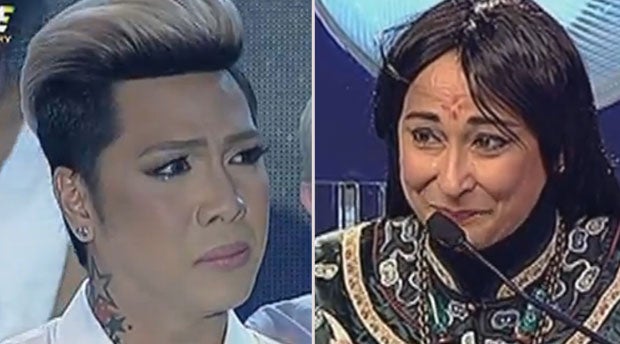 MANILA, Philippines—Veteran actress Cherie Gil on Thursday apologized to Vice Ganda for a tweet she made last year, calling the comedian “one of those scums of the earth.”

“I would like to personally apologize to you because I know that at some point in the past I have reacted to one of your stand up stints which maybe perhaps have been written by someone else and I didn’t take that into consideration at that time,” Gil told Vice Ganda during the ABS-CBN noontime variety show Showtime.

Gil was invited as one of the judges in the show’s “Magpasikat” segment, an annual tradition in celebration of Showtime’s fifth anniversary.

After Vice Ganda’s performance, a teary-eyed Gil issued the apology.

“I realized that at the end of the day it all comes down to getting to know the person better and understanding every story that each person goes through. Today, I saw your autheticity and your honesty,” Gil said.

In June 2013, Gil blasted Vice Ganda on Twitter in June 2013 regarding his stand-up comedy show, where he poked fun at broadcast journalist Jessica Soho’s weight.

Related story: Gang-rape joke went too far, says news anchor Jessica Soho
Gil then tweeted: “To Vice Ganda: you’re one of those scums of the earth. Shame on the Filipinos who laugh at such insensitivity and tactlessness.”

“It is not the image but the message we give to inspire people,” Gil said.

Vice ganda was seen in tears.