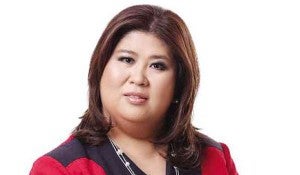 MANILA, Philippines—When it comes to apologies, how big is the difference between “acknowledging” and “accepting”?

Would the fact that the protagonists in this high-profile situation both have the title “Vice” affixed to their names be a factor in the speed of resolution?

Soho and Vice Ganda, or Jose Marie Viceral, and their respective fans, have been slugging it out on television and social networking sites since the latter, during a concert at the Smart Araneta Coliseum on May 17, tagged the former a logical target for gang rape, if she ever became a “bold” star.

It was part of a segment that also punned ABS-CBN figures Kris Aquino, Boy Abunda, Gus Abelgas and Kim Atienza.

Soho on Tuesday said the remark attached to her name was “cruel,” having trivialized rape which, she pointed out, was a crime. The remark was preceded and followed by cracks about Soho’s weight.

Her protest generated immediate and strong reaction on Twitter and, on Facebook, a wave of shout-outs in her favor.

On his daily noontime show on ABS-CBN Wednesday, Viceral delivered a longish “apology,” but not before expressing lightly veiled dismay. He said he had earlier phoned Soho, but that she refused to talk with him. Instead, Viceral said, Soho effectively discouraged him from calling again.

Thus, the comedian said, he felt the need to take before the cameras what he was not given the chance to tell Soho, “in the hope that this will reach you.”

In the course of his monologue, delivered in Filipino, and which occasionally slipped into comedy mode (“I’m only human, although I look like a horse”), he repeatedly, at times profusely, apologized “to everyone that I hurt, from my heart, not my mind—these words are uttered by my tongue and coming out of my own mouth, not dictated by other people.”

But he threw in explanations for his conduct as well: “I’m not a perfect comedian. I know that not all my jokes are funny; no comedian can claim that all his jokes are funny. There will always be someone in the audience who will not like a joke or two. ”

Viceral managed to chide the people who had swamped social networking sites with damning comments against him: “This is a small thing that came from a simple joke, but which some people have blown up into a national issue. Everybody has an opinion on it, and it’s not helping. Let us stop this.”

He divided observers and participants in the virtual debates into two camps: those who “understood” and took his jokes well, and those who didn’t get it. He thanked the first group profusely and told the second group: “It’s okay, I am not angry. If you don’t understand me, I will try to understand you.”

Viceral vehemently denied that his controversial Jessica joke was a mockery of rape victims. “It was not meant that way. It was just a joke, as I said at the start of the concert.” He vowed never again to include Soho in any of his comedy routines, “if that’s the only way I can prove that I’m sorry.”

A few hours later, Soho sent the Inquirer a text message “acknowledging” Viceral’s apology, without indicating whether or not she was accepting it. However, she denied that she had closed the door on him.

The statement said: “Just to clarify certain points about my phone conversation with him—his call came without warning, as his number was not programmed in my phone directory. I told him I wasn’t feeling well and I wasn’t sure I was ready to talk to him. But I clearly remember thanking him for his call.”

She added: “I sincerely hope and pray that (the apology) this was done with the purest intentions and determination to put this issue behind us. As I’ve said, this is not about me, but about the issue of rape not being an appropriate subject matter for comedy. Rape transcends age, economic class, gender—and even one’s weight.”

With a report from INQUIRER.net