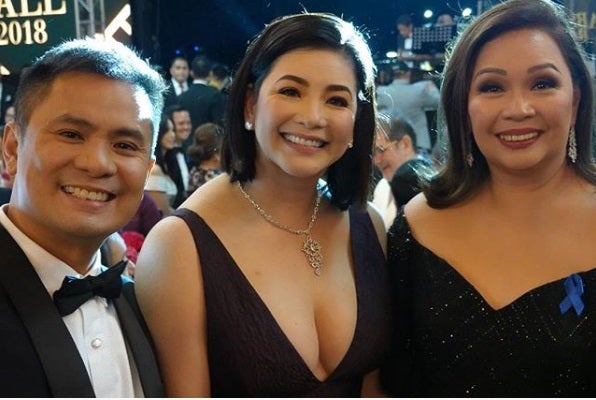 Was her presence at the 2018 ABS-CBN Ball proof that she would be switching networks?

True enough, Asia’s Songbird Regine Velasquez-Alcasid was among the most sought-after guests at this year’s most glamorous gathering of the stars held Saturday night at the Makati Shangri-La.

As rumors of her transfer further intensify, Kapamilya stars speak out on what they think about it.

Velasquez attended the ball with her husband, ultimate singer/songwriter Ogie Alcasid and her stepdaughter Leila Alcasid.

Although she did not walk the red carpet, she was seen inside the event venue posing for photos with ABS-CBN executives. 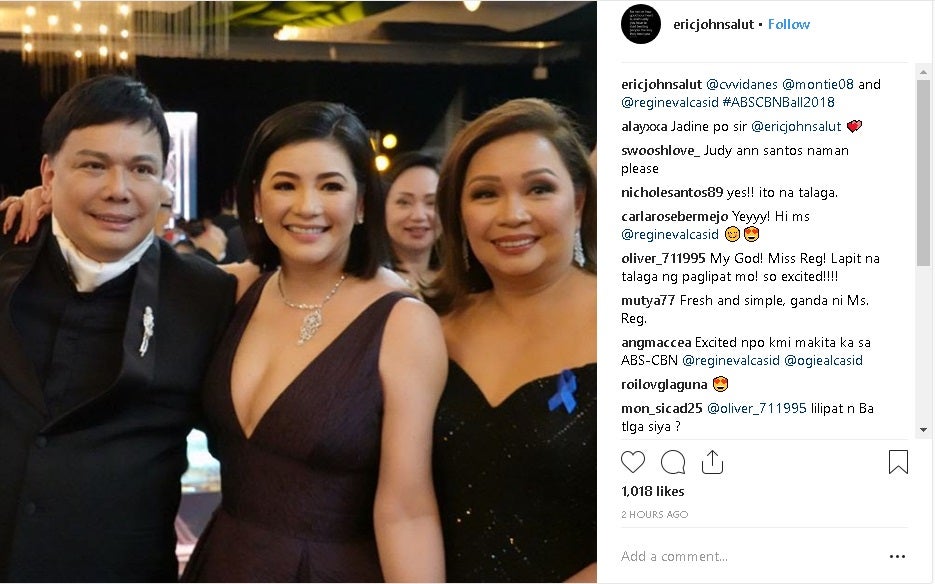 Veteran singer and good friend Martin Nievera told the entertainment media that he only knew of the transfer rumors through reporters who asked him about it on the night of the ball.

“I didn’t know that until you asked me, is it for real? So she’s the special guest then. I’ll tell you something, the Kapamilya channel – ABS-CBN, has always been open for anyone and everyone. To gain Asia’s Songbird for me is a plus. It shows you how much this station is love because let’s face it, she’s a queen where she was. I have nothing against GMA7 but the fact that we have now received their major blessing I think is a plus for just in ABS-CBN,” he said.

He shared that, just like Velasquez, he also first belonged to GMA before moving to ABS-CBN.

“It’s a reunion of sorts, so I think just like any ‘bird,’ she’s just laying around and right now she’s perched on the tower of ABS-CBN,” he added.

Another good friend and former “S.O.P” co-singer Jaya also revealed that she did hear things about it but chose to leave it to the songbird to answer for herself.

“Of course, I hear things here and there, but I think I’ll reserve that for her to answer. But if ever, that’s great of course. And I know she’s ready for the new changes and opened doors. I mean how open can it be for Regine. She’s our biggest and the best artist. I’m really excited for her and kung ano man ang mangyari definitely ikatutuwa yun ng mga fans,” she said.

She also expressed excitement with the idea of reuniting with her fellow former “S.O.P” main acts composed of Alcasid, King of Soul Janno Gibbs, Asia’s Nightingale Lani Misalucha and of course Velasquez should the latter’s transfer be true.

“Oh my goodness. Oo nga noh, ang dami namin na taga GMA dati. I’m crossing my fingers kasi kahit ako nae-excite just thinking about how things would be. If ever she does move to ABS mag-guest kami, kakanta ganun. Yes, I’m looking forward to that ‘coz Janno [Gibbs] already made a single with Star Music so nothing’s impossible,” she added.

Even Kapamilya power belter Morisette Amon feels excited at the thought of possibly working with Velasquez.

She also shared that she is a die-hard fan of the songbird since her childhood.

Meanwhile, her family would rather keep mum about the issue. But just to clear, Ogie sets it that as of this time, his wife is still with her home network but said he is very happy and excited for the things that would happen.

“Well, she’s officially still with GMA, kung ano man yung naririnig niyo all I can say is that I’m very very excited for her. Whatever happens lagi ko sinasabi, it’s all positive vibes and exciting times ahead,” Ogie said.