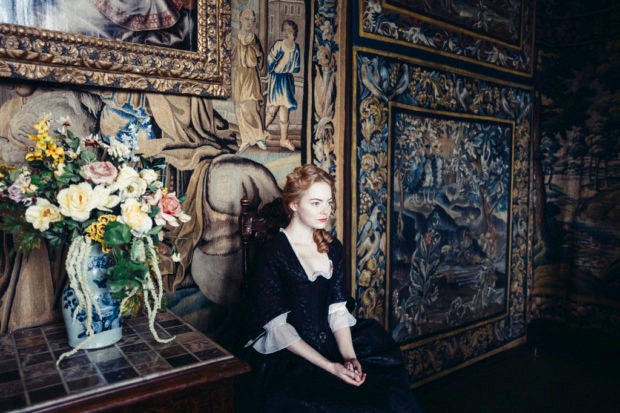 NEW YORK  — For a festival that prides itself on remaining outside of the fray, the 56th New York Film Festival kicked off with a royal feast of savagery and scheming.

It is, as you might imagine, a lot of fun. Lanthimos, the Greek provocateur of “The Lobster” and “The Killing of a Sacred Deer,” delights in diving into a gleefully twisted tale about two women — Stone’s dishonored maid Abigail and Weisz’s Lady Sarah — jockeying for the British Queen’s ear (and the Queen’s bed). To cast it, Lanthimos resorted to some unconventional audition techniques.

“He had me pant like I was giving birth throughout the lines,” said Stone, laughing, in a press conference Friday. “I think he just does this for everyone.”

But more than in any recent year, the New York Film Festival has chosen not to participate in the kind of palace intrigue that generally governs the festival world. The New York Film Festival, which will run through Oct. 14, has always eschewed many of the distractions that can engulf other festivals for a more curated slate, soberly chosen, that reflects much of the year’s best, often culling substantially from more high-wattage festivals like Cannes, Venice, Telluride and Toronto.

Yet this year, neither of New York’s three gala screenings — “The Favourite,” Alfonso Cuaron’s autobiographical tribute “Roma” (the centerpiece) and Julian Schnabel’s Vincent van Gogh drama “At Eternity’s Gate” (the closing film) — are that much sought-after. They all first bowed at one of the fall’s other festivals.

That’s unusual for New York’s prized gala slots where in years past films like “The Social Network,” ”Life of Pi” and “Steve Jobs” have been first seen by audiences. But rather than chose films that might not have been up to snuff, Kent Jones, festival director, Dennis Lim, programming director, and Florence Almozini, associate director of programming, have opted to value quality over world premiere bragging rights.

If Hollywood major studios have shied away from the kind of prestige films that have often suited the festival’s galas, there’s no lack of adventurous, worthy options internationally. Netflix has also picked up some of the slack. There are a NYFF-high six Netflix films at this year’s festival, including “Roma,” ”The Ballad of Buster Scruggs” and Tamara Jenkins’ “Private Life,” which stars Kathryn Hahn and Paul Giamatti as an Upper West Side couple struggling to conceive.

Jenkins, the director of “The Savages” and “The Slums of Beverly Hills,” is one of the four female filmmakers in this year’s main slate. The low percentage (last year it was 32 percent), has brought some criticism on the Film Society of Lincoln Center, which puts on the festival.

“I was just looking at something that somebody emailed me saying, ‘Oh my god, there’s only four female filmmakers at the New York Film Festival.’ Luckily, I am one of those four,” said Jenkins. “I’m very grateful and excited. It’s one my favorite festivals in the world. It’s one of the greatest New York gifts. I love it so much. I’m usually there as a spectator, scamming tickets.”

Jenkins and New York filmmaker Alex Ross Perry (“Her Smell”) are some of the hometown directors among this year’s slate. Barry Jenkins’ Harlem-set “If Beale Street Could Talk” will have perhaps the most emotional — and unusual — festival premiere in New York. For the first time, the New York Film Festival will uproot from the Upper West Side and head further uptown, to the Apollo Theater. Jenkins’ film, which was also shot in Harlem, will play at the Apollo on Oct. 8.