Jane Fonda, icon on a mission 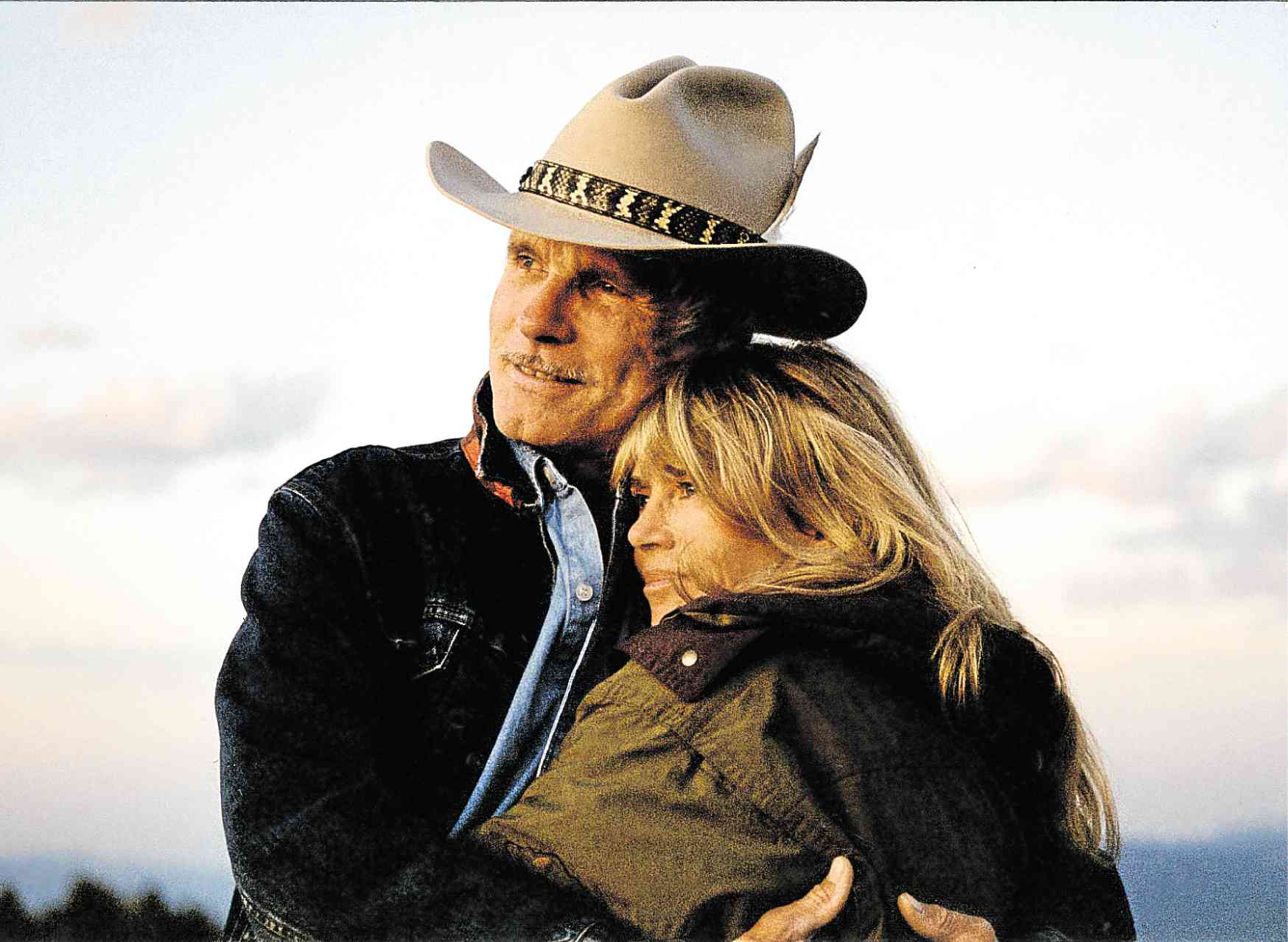 In “Jane Fonda in Five Acts,” Henry Fonda’s gifted daughter refers to her current activities as “the beginning of my last act.”

Susan Lacy’s exhilarating two-hour-and-13-minute documentary, which debuted on HBO Go early this week, gets under the 80-year-old cultural icon’s skin as it attempts to shed light on the life and times of the two-time Oscar-winning actress (“Klute,” “Coming Home”) who has been vilified as Hanoi Jane, lusted after as Barbarella, and heralded by activists as a beacon of the women’s movement.

The docu stuns with the volatile issues it unblinkingly addresses as much as it enlightens with insightful explanations, straight from the horse’s mouth, about the string of events that has made the actress’ personal life as iconic as the screen classics she has appeared in. 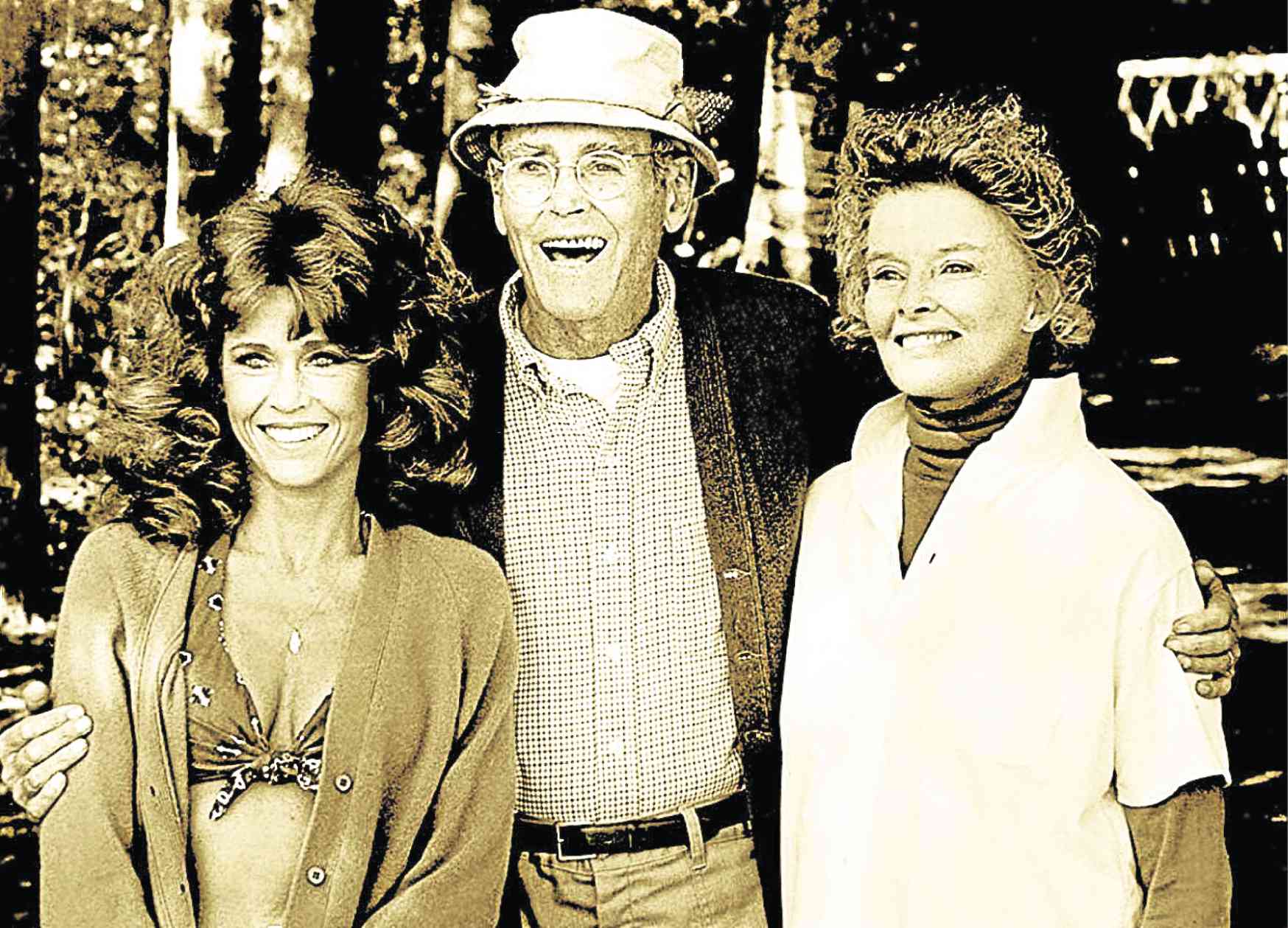 But, while she refused to be defined by the powerful men who inhabited her life, it was Jane’s strained relationship with her emotionally distant father that shaped her enthusiasm and willpower to carve her own path.

Sadly, the actress’ dad “couldn’t express emotion and affection [for his troubled wife and kids] without a script,” so at age 21, Jane was “forcibly” thrust into the acting world, where she found solace from her unhappy home life.

While Jane’s father was having an affair with the sister of the stage manager of the Broadway play (“Mr. Roberts”)  he was acting in, her mother descended into mental illness.

Jane is still haunted by her failure to show more compassion for her “damaged” mom, Frances Seymour Fonda, whose demons she couldn’t comprehend. Shortly thereafter, her mother was admitted to the Riggs Center, the mental facility where she was diagnosed with manic depression.

She recalled, “Sometimes, my mom would hold my hand, and I would notice it shaking. So, I’d also shake my hand to make her feel she wasn’t alone.”

But, in 1950, Jane did something she eventually regretted: She refused to see her mother when the hospital allowed the latter to make a quick home visit.

To her dismay, her mom saw it as an opportunity to find a razor that, upon her return to the hospital, she  used to cut her throat. 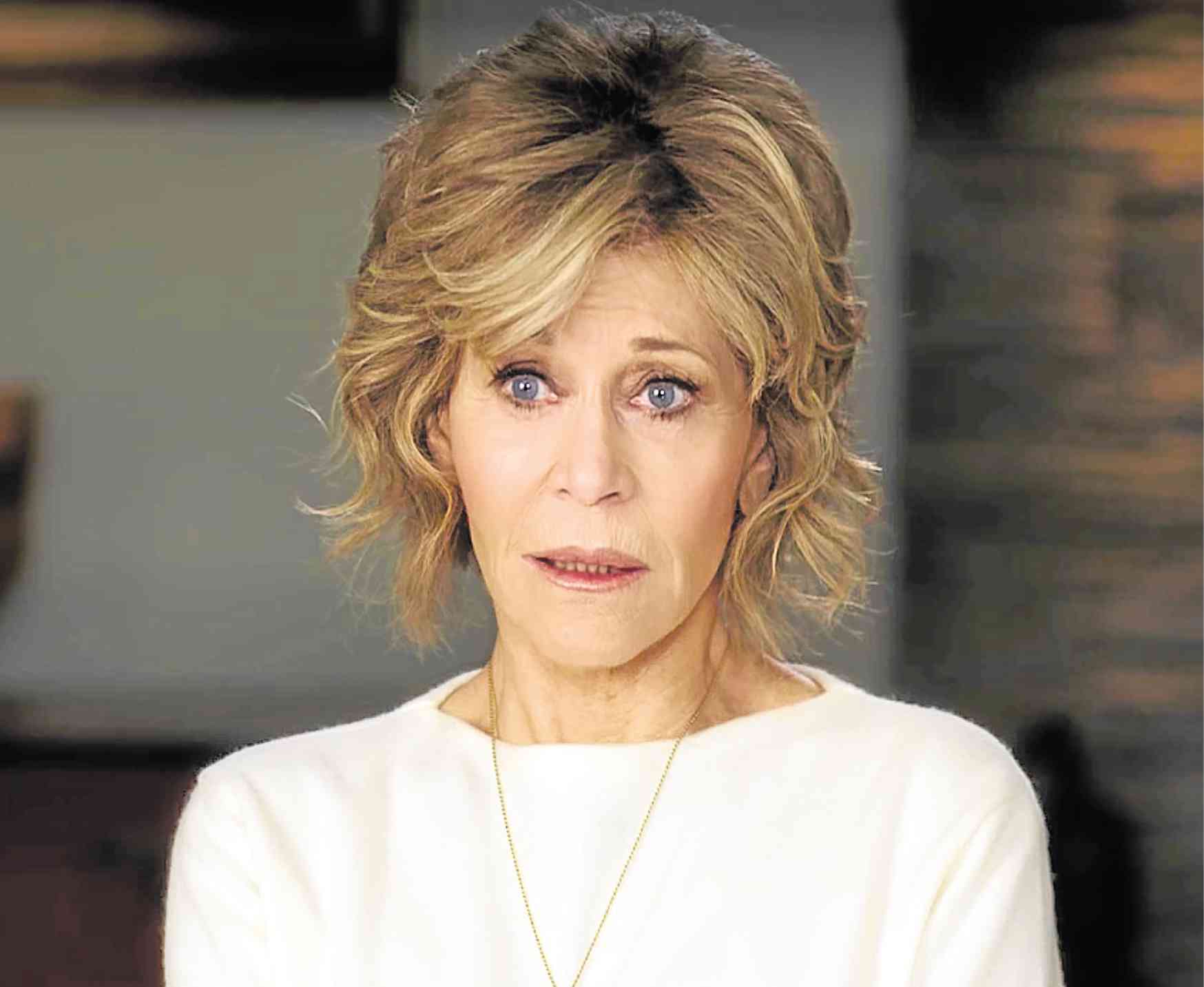 An emotional scene from “Jane Fonda in Five Acts”

Towards the end of the film, Jane, still lovely but now in the twilight of her years, is seen taking a tearful trip to the cemetery to seek forgiveness from her long-departed mother, and atone for her sins of neglect.

In 1981, when Jane produced “On Golden Pond,” where she starred with Katharine Hepburn and her dad, she was more than ready to “reconcile” with her father.

With bittersweet sadness, Jane looked back as she disclosed, “There was a lot of ‘invisible healing’ going on in that film.”

This is apparent in a moving clip showing an improvised scene on a boat between the father-daughter pair that had Jane’s dad subtly wiping his tears away.

Henry Fonda won his first Oscar award for his portrayal in the film, and died the following year, at age 77.

Aside from the aforementioned dramatic upheavals, the docu also features little-known facts distilled from 21 hours’ worth of interviews with Jane.

The actress speaks candidly, sometimes on the verge of tears, about her triumphs, insecurities and missteps, as well as her well-documented “love affair” with activism.

The film includes a section examining her controversial two-week visit to North Vietnam in the ’70s that exposed her to vituperative attacks from bashers that included former US president Richard Nixon. 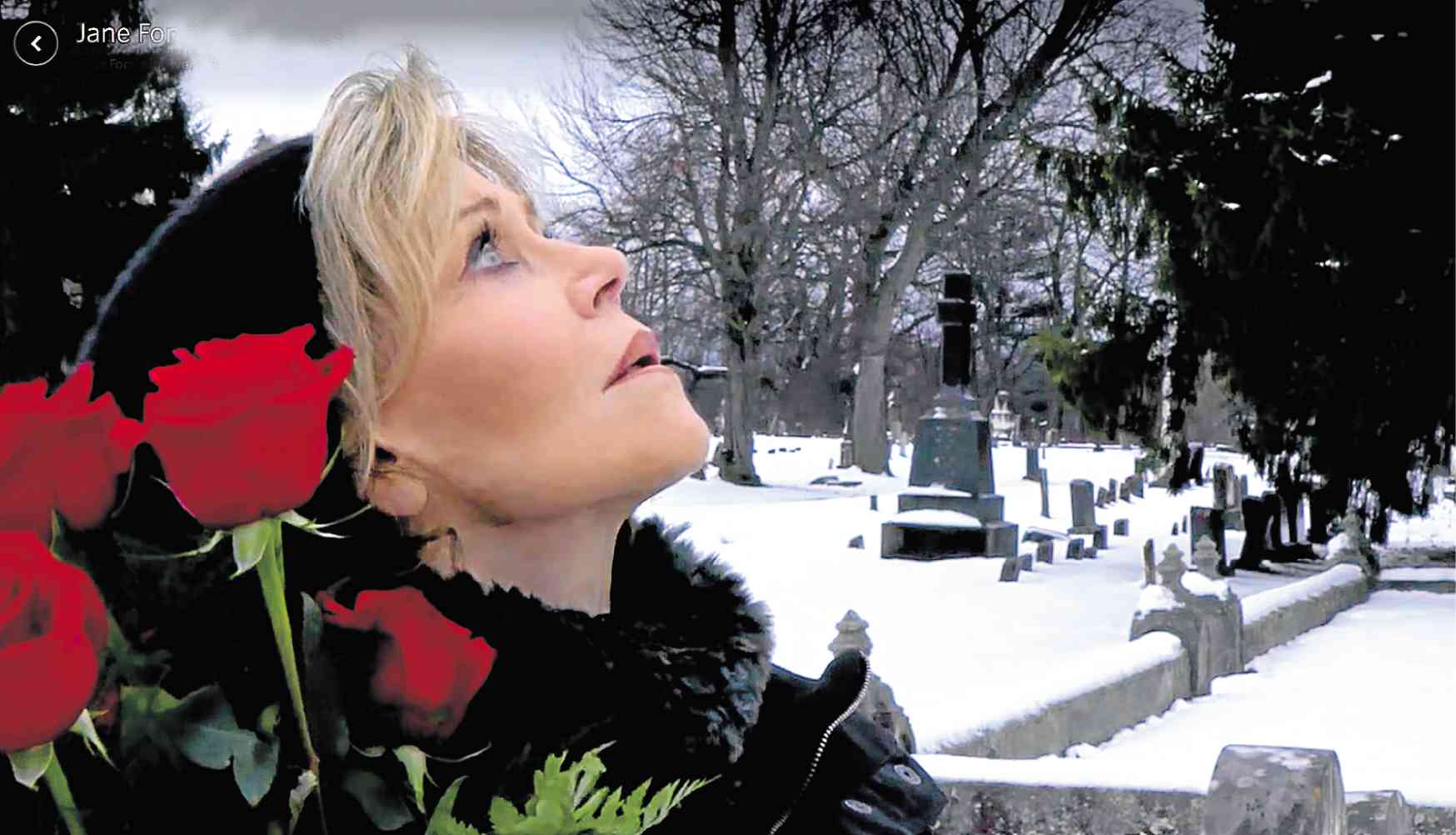 Fonda visits her mother’s grave to atone for her sins of neglect.

The first four acts are named after the four men (her dad and three husbands) who shared her personal and professional persuasions, while the final act is dedicated to Fonda herself, as she finally confronts her demons, reconnects with her family, and resumes a successful career as an actress-activist, this time on her own terms.

Other fascinating revelations: Jane discussed in passing the “small wrinkle” in her lifelong friendship with Robert Redford and admitted how “slighted” she felt when Robert didn’t fight hard enough for her, for the role that eventually went to the much-younger Debra Winger in “Legal Eagles.”

Jane also explained why she decided to get a divorce from “my favorite ex-husband” Ted Turner: “We had a wonderful 10 years together,” she mused. “But, I had to hide a part of me to please him.”

She also came clean about occasionally going under the knife: “[As for plastic surgery,] I don’t feel so good about the need to alter myself. I wish I was braver than Vanessa Redgrave, whose natural beauty I adore,” she enthused.

She rationalizes her polarizing actions as an activist by stressing the need for responsible citizens to take part in shaping their future, and not just “sit idly by” while the world is being destroyed by power-hungry sycophants and political opportunists.

“A healthy country should be in a [state of] perpetual revolution,” she points out.

Indeed, beyond the glitz and glamour inherent in her line of work is a woman of substance, who initially had to prove to the world that she was more than just her famous father’s self-entitled daughter.

More than anything, Jane Fonda’s intent to do well can be attributed to a deep-seated longing for clarity and her other interrelated needs—to keep her demons at bay: A sense of purpose, healing and, most importantly, redemption.

Read Next
Lewis Tan: I’m confident in Asians’ future as artists
EDITORS' PICK
Acer starts the year off strong with the Aspire Vero National Geographic Edition
Vietnam’s ‘crazy guy’ aims to save ocean from waste
WHO says no evidence healthy children, adolescents need COVID-19 boosters
Gear up and get ready to play with Yamaha Mio Gear
Over 3 Million worth of prizes to be won at Smart Padala’s SENDali Manalo Promo!
Marcos-era elections: Not what his son signed up for
MOST READ
‘Sampal sa gobyerno:’ Drilon wants unvaxxed PAO chief barred from working
Vice mayor slams Vico Sotto for turning Pasig into a ‘puro palabas’ city
Guevarra to Acosta: Obey rules on unvaccinated
Guanzon denies Comelec delaying resolution of cases vs Marcos Jr. to favor any party
Don't miss out on the latest news and information.