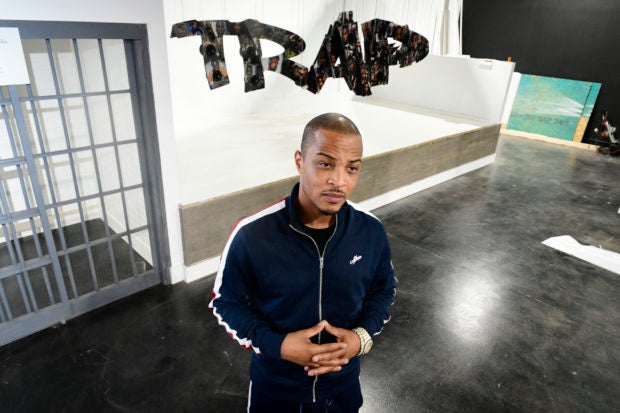 This Sept. 14, 2018 photo shows rapper Clifford Harris Jr., better known as T.I., during a tour of his Trap Music Museum in Atlanta. Trap is a popular sub genre of hip-hop with the term trap referring to places where drug deals take place. The museum opens on Sept. 30. Image: AP/John Amis

ATLANTA (AP) — Rapper T.I. took a stroll through one of the toughest neighborhoods in Atlanta as children on school buses screamed his name, several motorists honked their horns and men asked for a selfie.

Bankhead, an impoverished area known in the city for its high criminal activity, is viewed as a “trap” area — where drugs are regularly distributed and used. Most would be fearful of venturing into the potentially dangerous environment, yet T.I. walks the streets where he grew up with no worries and no security, while sporting a glistening gold watch and pinky ring.

That’s because T.I. is highly respected in Bankhead, a neighborhood he helped popularize through his songs viewed as trap music, a sub-genre mostly detailing the lifestyle of selling drugs, highlighted by gritty lyrics and heavy beats.

“He is respected because he respects us,” said Rosie Brittain, a Bankhead resident who helped raise T.I. “He represents us. He always comes back home. Nothing but love for him.”

The three-time Grammy winner will pay homage to trap music culture with the Trap Music Museum, even dedicating areas of the exhibit to rappers like Gucci Mane, Jeezy, Rick Ross, Future and himself. It opens Sunday in Atlanta.

The pop-up museum will offer an “Escape the Trap” experience — much like the popular Escape the Room adventure game — where visitors have to use clues to find their way out of a house littered with illegal drugs before authorities arrive.

While sitting on his grandfather’s front porch, T.I. spoke with The Associated Press about the museum and his 10th studio album, “Dime Trap”, out on Oct. 5.

AP: Why do you feel so safe in Bankhead?

T.I.: It’s a little old lady right up the street. She only leaves her house to go to church and the grocery store. She got a little .38 Special (handgun). She keeps it under pillow or in her nightstand next to her blood pressure pills. And she will blow your damn head off if you come (messing) with T.I. That doesn’t come from anything I’ve done for myself. It comes from me being a genuine person and caring enough about the community and the people in it to treat them with respect.

AP: Why did you feel the need to curate the Trap Music Museum?

T.I.: I want to celebrate the culture and not just me. The easy thing for me to do is set up a show and it just be me and perform all the songs from trap music, which I was tempted to do. The genre has become so significant that I felt it deserved more than that. It’s really going to be a place where people can take pictures and kind of interact.

AP: When did you realize trap music was about to take off?

T.I.: The first time I saw the potential, I hardly noticed it. You know, when you’re so close to something you can’t see it growing. Like if you’re around a puppy dog every day, it’s still a puppy to you even though it’s getting bigger. That how trap music was to me. Even when it was at its biggest point, I never really noticed until people in the EDM world started to call their music trap. That’s when I started taking notice.

AP: How do you feel when people criticize trap music for its glorification of drugs and gunplay?

T.I.: It did that, but so did mafia movies. So did “Scarface.”…If I am being reflective and honestly interpreting the effects my experiences had on me, the people who weren’t there won’t be able to decipher that reflection from glorification. I’m going to speak about it the same way Al Bundy speaks about scoring three touchdowns in one game at Polk High. That’s how he spent his teenage years. Those were his glory moments. I didn’t play football. I sold dope. …I’m proud I survived those things. I’m not proud of all of things I necessarily did, but proud of all the lessons that I learned from them.

AP: Will your “Dime Trap” album harken back to your drug-selling days?

T.I.: Slightly. The first record “Trap Muzik,” it was about the experiences I endured and the lifestyle before I made it in the music industry. With “Dime Trap,” this is the evolution of trap music and what I learned and some of the epiphanies along the way. I’ll talk about the things that really matter to me now. CC

Black musicians reflecting on turmoil of the times in music