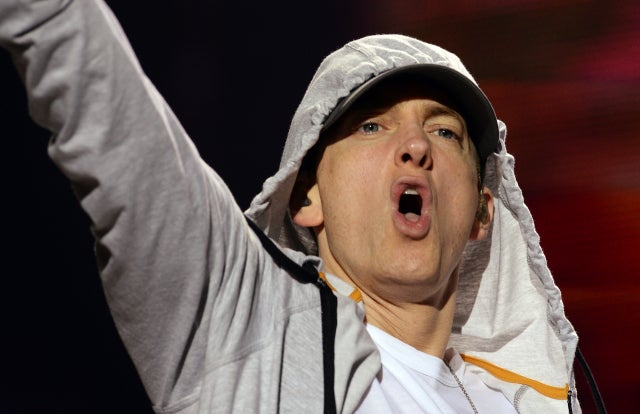 Eminem has a song on the “Venom” movie soundtrack. Image: PIERRE ANDRIEU / AFP

Movie score composers, such as John Williams for “Jaws,” Michel Legrand for “The Thomas Crown Affair” or Maurice Jarre for “Lawrence of Arabia,” often stay in the shadows of the industry, even if their work remains essential to a film’s success. Sometimes, however, major stars of the music world, who are used to life in the limelight, are called on to contribute to movie soundtracks. Here’s a look at some forthcoming films featuring musical contributions from famous artists.

Lady Gaga for “A Star is Born,” directed by Bradley Cooper

In this third remake of the film of the same name — first directed by William A. Wellman in 1937, then by George Cukor in 1954 — Lady Gaga plays the role of Ally, a talented singer who suffers from self-doubt. She meets Jackson Maine, played by Bradley Cooper (who also directs the movie), an alcoholic country singer whose career is on the wane, and who turns Ally into a star. To accompany her big movie debut, the “Born This Way” singer penned the song “Shallow,” performed by Ally and Jack. The film opens in U.S. theaters on October 5.

The frontman of the British band, Radiohead, has a third solo album in store for the “Suspiria” movie soundtrack. The film, directed by Luca Guadagnio, is a remake of Dario Argento’s 1977 horror film, and opens in US theaters on limited release from October 26 or on wide release from November 2. The soundtrack is slated for release October 26. The single “Suspirium” is out now.

The star of the 1980s and 1990s has contributed a track called “The Big Unknown” to Steve McQueen’s upcoming movie starring Viola Davis and Michelle Rodriguez, Pitchfork.com reports. Opening November 16 in the US, “Widows” tells the story of four widows who step up to finish a job started by their deceased criminal husbands. Sade recently released her first new song in seven years, “Flower of the Universe,” which featured on the soundtrack to the movie, “A Wrinkle in Time,” directed by Ava DuVernay and released in March.

After Céline Dion’s track for the new “Deadpool” movie, Eminem is the latest star to lend his voice an antihero adventure with “Venom.” The track of the same name features on the rapper’s latest album, “Kamikaze.” “Venom” opens October 5 in U.S. theaters.

Natalie Portman plays the role of a rising pop star in the upcoming film from Brady Corbet. “Vox Lux” explores American history from 1999 to the present day through the eyes of this singer. Australian artist Sia has been signed up to write original songs for the picture. NVG

‘A Star Is Born’: Lady Gaga triumphs in movie debut at Venice