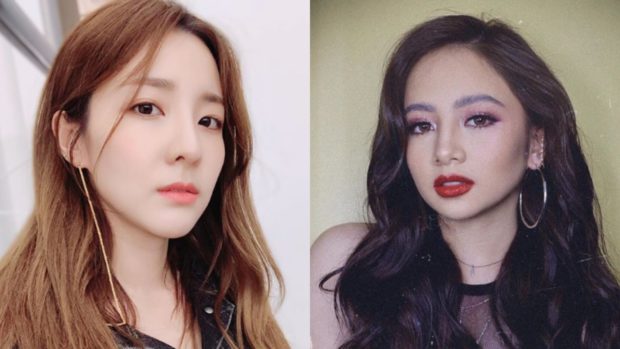 If there is one thing Ella Cruz may have learned lately, it is to never underestimate the wrath of die-hard K-pop fans.

The actress-dancer recently got flak from K-pop fans for apparently asking former 2NE1 member Sandara Park to buy concert tickets for her for the show of another K-pop group, Black Pink. This all started from Cruz’s now-deleted Twitter posts yesterday, Sept. 21.

Cruz tweeted Park to ask the favor, hoping that she will be lucky to snag the tickets and see her idols perform on stage.

She then explained that she needed some help since the concert will be held in South Korea. Cruz wrote that she already checked her flight ticket and was set to buy tickets for the show, but she said it is hard for her to get these since it is sold through a South Korea ticketseller.

K-pop fans fumed upon learning about Cruz’s request. One netizen going by the handle @xxirxxnoy complained: “Who is [E]lla [C]ruz?? Girl, if [you[ want the ticket please buy [yourself].. she’s not even close [to you].” 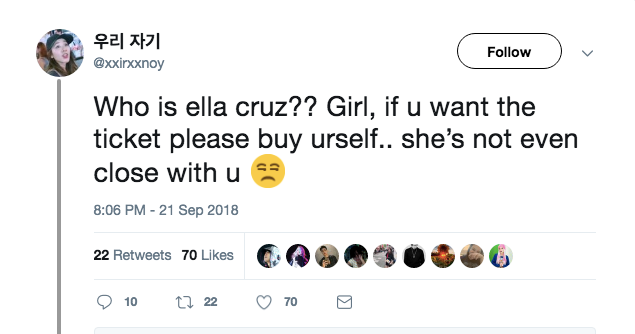 Another netizen, Bigbang’s (@LouAnne0489), got irritated at the actress, adding a photo of Rihanna as a way to show her feelings. “Why ask for a free ticket when you obviously have money? [Y]ou go travel around the world with [your] money but ask for a free ticket?” s/he asked Cruz. 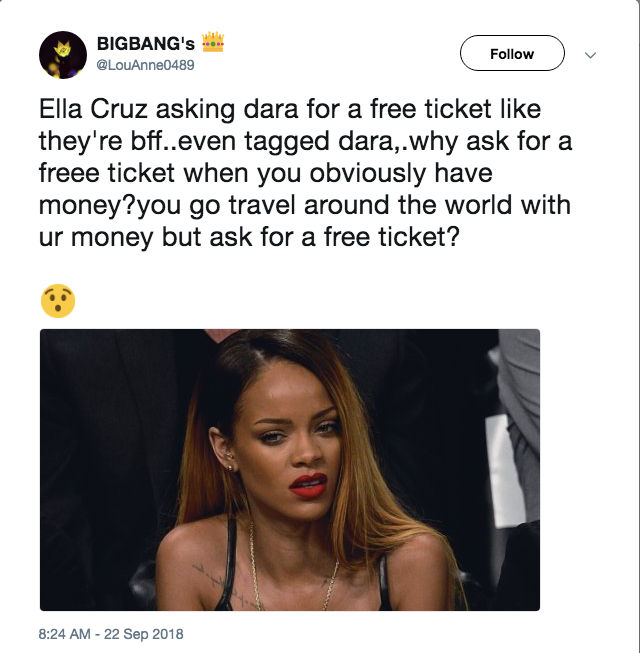 And one Pia (@agemakiiiiii) clarified that she was not bashing the actress, but she too was dismayed at her for supposedly using Park to get the tickets. “Really? Di nga ata kayo close. (I think you two are not even close),” the netizen expressed.

After getting the hate, Cruz posted her apology some hours later. She said sorry for “ranting too much” that night, adding that her dog died earlier.

She was informed of the feedback through a text message from her mom. Cruz said, “[T]ao rin ako, tao rin kaming mga artista nasasaktan.” (I’m also a person. We artists get hurt too.)

Cruz added that her “fangirl self” was sorry for “not thinking what other people will think.” She added: “[A]kala ko okay lang na magtag ng artista, dahil isa lang din naman ako sa mga fans… pasensya na po…” (I thought it was okay to tag an artist, because I too am a fan. I really am sorry.) 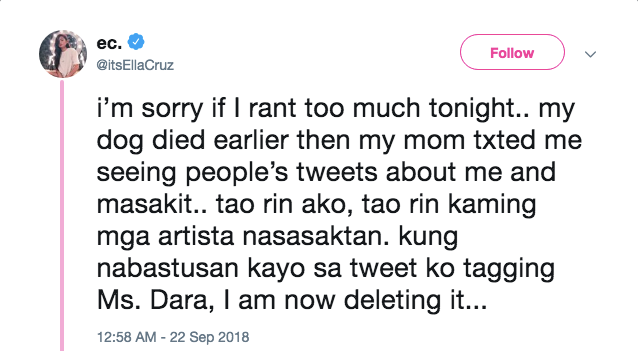 But for one Beu (@blinkeult), s/he could not accept the actress’ apology and said, “Well, let me remind you that being a fangirl does not excuse you from taking advantage of a person, especially Dara. Try again.” 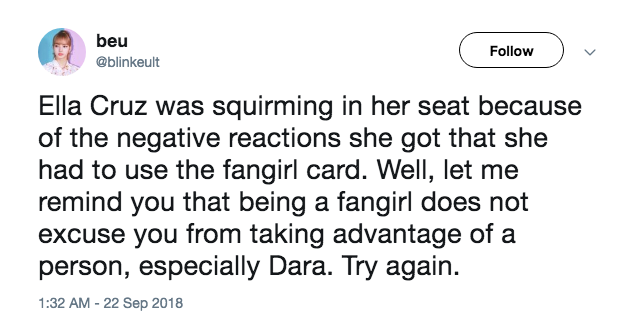 While Park is yet to comment on the issue, it appears that another actress was lucky to snag the tickets with help from Park. According to a Twitter fan account for Park (@WeLoveDara), Kim Chiu will be able to see Black Pink live and up close, thanks to Park.

The fan account posted a screenshot of Chiu’s Instagram Story expressing her gratitude to the Korean star.

How did Chiu get the tickets from Park? In another tweet, the fan account explained that it was through Park and Chiu’s mutual friend, TV host and comedian Ryan Bang. JB

[INFO] Kim Chiu mentioned that she was given a Blackpink Concert in Seoul ticket by Dara through Ryan Bang. That's why she posted her instagram story before thanking Dara. 😊

Ella Cruz speaks up on the coffee date guy: ‘The truth will come out’