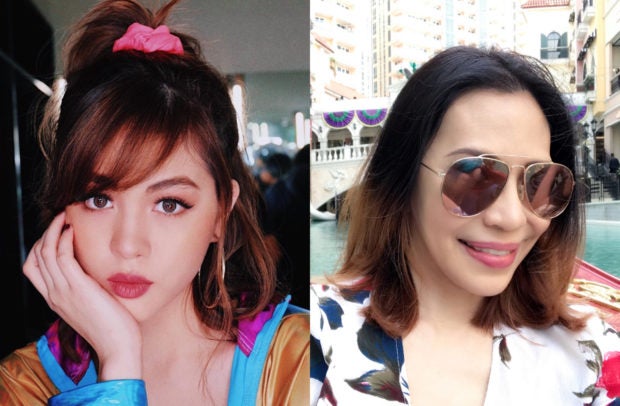 There may be another bump in the not-so-smooth-sailing relationship of singer-actress Jenine Desiderio and her daughter Janella Salvador — this time, involving an allegedly “pilfering” and “lying” driver.

Desiderio took to Facebook on Sept. 9 to express her frustration about her daughter who she said chooses to “believe” a “pilfering” driver over her, despite the presence of a witness and evidence: “Eh yung nahuli mo na on three occasions yung driver ng anak mo (with witness and evidence) na nangugupit at nagsisinungaling tapos mas pinili nyang paniwalaan yung driver.”

(When you caught the driver of your daughter on three occasions (with witness and evidence) pilfering and lying, and yet she chose to believe the driver.)

Netizens wondered at first if Desiderio was talking about Salvador whose nickname is Jea. In the comments section of her post, she made it clear that she was indeed talking about her daughter.

One friend of the actress commented that perhaps Salvador was just going through a phase and prayers may help, to which Desiderio replied, “Bakit parang ayaw s’ya tablan? Dami kasi kumakampi because of that she thinks she’s doing right and I’m wrong.”

(Why does it look like prayers don’t work on her. A lot of people are taking her side; because of that, she thinks she’s doing right and I’m wrong.)

Another commenter, Audie Dulalia Bantigue, thought Salvador probably did not have the guts to fire her driver yet, and that Salvador might not be aware of the risks for keeping the driver. “Sadly as a parent kailangan mo pa dagdagan ang pagbabantay (you need to be more vigilant),” the commenter added.

“Nagpapabantay ba? (Is she asking me to lookout for her?)” was Desiderio’s only retort.

“Takot siya, obviously, mawalan ng driver (She’s afraid, obviously, to lose a driver),” commented one Facebook user, Monique Lecaros. Desiderio then revealed in her reply that Salvador’s driver even failed to pick her up twice.

“After all [that] he’s done, hindi s’ya kawalan (he’s not a loss),” Desiderio stated. “He cannot be trusted.”

This is not the first time Desiderio made use of her social media platforms to unload about her frustrations concerning her daughter. Last year, she took a swipe at her daughter’s supposed hard-headedness in a series of posts on Twitter.

Nevertheless, Desiderio does express her support for her daughter as well, just as she did for Salvador’s film “So Connected” which premiered last May. JB

Read Next
Darren Criss makes history as first Fil-Am actor to win an Emmy
EDITORS' PICK
Notice of 2020 regular meeting of stockholders June 18, 2020
SM prepares for ‘safe malling’
Leveling up your ‘lutong bahay’ with the kitchen companion you never knew you needed
NBI, Immigration to join hunt for ‘underground’ medical clinics
2 Chinese nationals arrested in raid on another unlicensed COVID-19 hospital in Pampanga
P2.2 trillion in losses: Cost of COVID-19 impact on PH economy
MOST READ
Revillame tells Roque: ABS-CBN is in my heart despite being in rival network
NCR is ready for GCQ — Palace
LOOK: Robredo, Vico Sotto, check Community Mart ops in Pasig
Año: Quarantine passes not needed in GCQ, movement restricted to essential travel
Follow @KMatrianoINQ on Twitter
Don't miss out on the latest news and information.