WATCH: Fil-Ams who hung self-made poster at McDonald’s to be featured in marketing campaign

What was supposed to be a harmless prank pulled by two men at a McDonald’s store in the US turned into something more, all thanks to Ellen Degeneres.

The television host surprised Jehv Maravilla and Christian Toledo, two Filipino-Americans who hung their self-made poster at the fast-food chain, by announcing that they would be featured in its marketing campaign. Degeneres made the announcement on “The Ellen Degeneres Show” aired Monday,  Sept. 17.

Degeneres said that what Maravilla and Toledo did was a “good prank,” and invited them to guest at her show. She asked them how they pulled it off. She got curious as to how Maravilla managed to get into the fast-food chain unnoticed—by dressing up as a fake manager.

“I went to a Goodwill nearby with my friend, and he suggested I go get a uniform so I could dress like the part,” he told Degeneres, adding he made a fake badge at home. 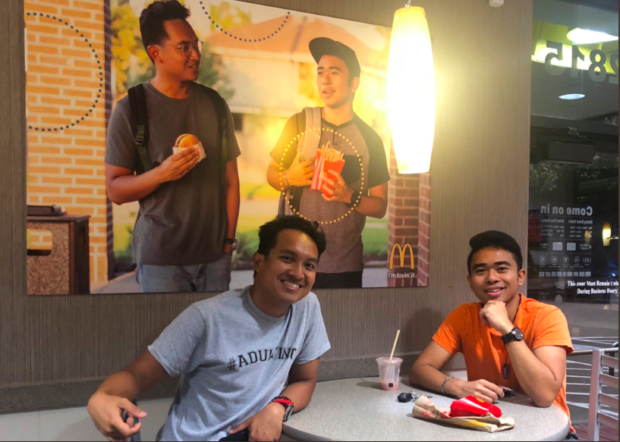 Christian Toledo and Jehv Mahravilla pulled the ultimate prank by sneaking in a fake poster at a fast-food chain to promote Asian representation.  Image: Twitter/@Jehvolution

Maravilla replied: “Yeah, it was weird! It was the first location we went to, and it was the right size for me too. So it was like meant to be!”

Since Degeneres has had the habit of surprises, she made sure the two would not leave empty-handed. Aside from being featured in the marketing campaign, she revealed the edited version of  Maravilla and Toledo’s poster hung outside her studio—which now included herself. Degeneres also asked the duo if they could sneak in a fan-art of herself in their local fast-food branch.

But she saved the best for last: Not only do they get featured in the campaign, but also get paid for it for $25,000 (approximately P1.3 million).

Mahravilla and Toledo pulled the prank in the Texas branch of the fast-food chain, and said on Twitter that the poster had been hanging for 51 days without being noticed. He said that their goal for the prank was to promote Asian representation.  /ra