The October 2019 origin story “Joker” will take a look at Batman’s famous nemesis before he transformed into a cackling supervillain, and now we see Joaquin Phoenix’s interpretation of a pre-Joker Arthur Fleck.

Through a post made to Instagram, director Todd Phillips has shown how actor Joaquin Phoenix will appear in the 2019 movie. 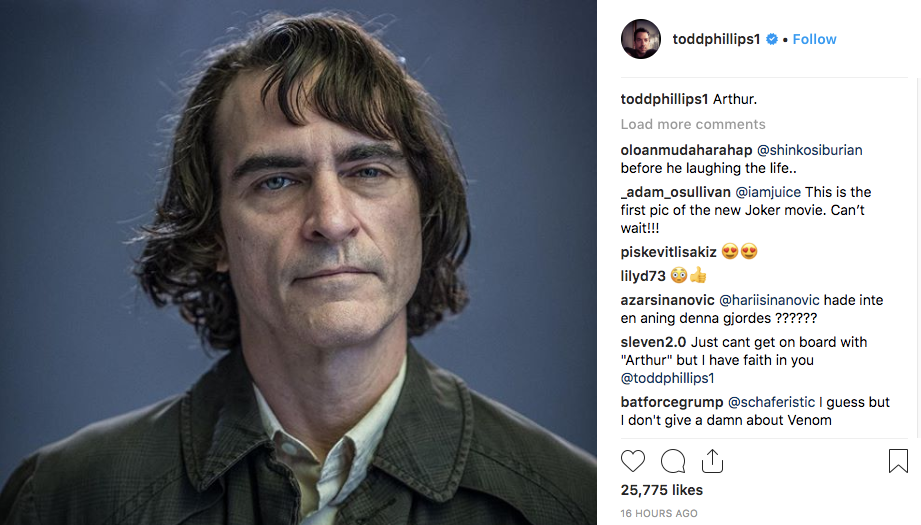 It’s a far cry from Jared Leto’s tattooed and tooth-capped character seen in 2016’s “Suicide Squad” and, equally, an insight into a subdued, cynical aspect of this incarnation, as imagined by Phoenix, director Todd Phillips (“The Hangover” trilogy, “War Dogs”) and scriptwriter Scott Silver (“8 Mile”, “The Fighter”).

Inspired by “Batman: The Killing Joke”, an award-winning if not gruesome Alan Moore graphic novel, the feature film is an “exploration of a man disregarded by society” and “not only a gritty character study, but also a broader cautionary tale,” Warner Bros previously explained.

In the comic book, Joker’s given name is not disclosed, but he does have a career background as a chemical company engineer and an aspiring stand-up comedian.

Robert De Niro has been linked with a role as a talk-show host who becomes part of Fleck’s path towards villainy.

At one point Alec Baldwin had been connected with the part of Thomas Wayne, philanthropist father to the orphaned Bruce Wayne, who then goes on to become Batman. The elder Wayne was described not as the respected, measured corporate leader as often portrayed, but a “cheesy” businessman with comparisons to a 1980s Donald Trump.

As it is, Zazie Beetz (“Deadpool 2”), is expected to play Fleck’s girlfriend, Frances Conroy (“American Horror Story”) his mother Penny, Marc Maron (“Glow”) a talent agent, and Todd Phillips associate Bryan Callen is thought to pop up as another comedian. JB