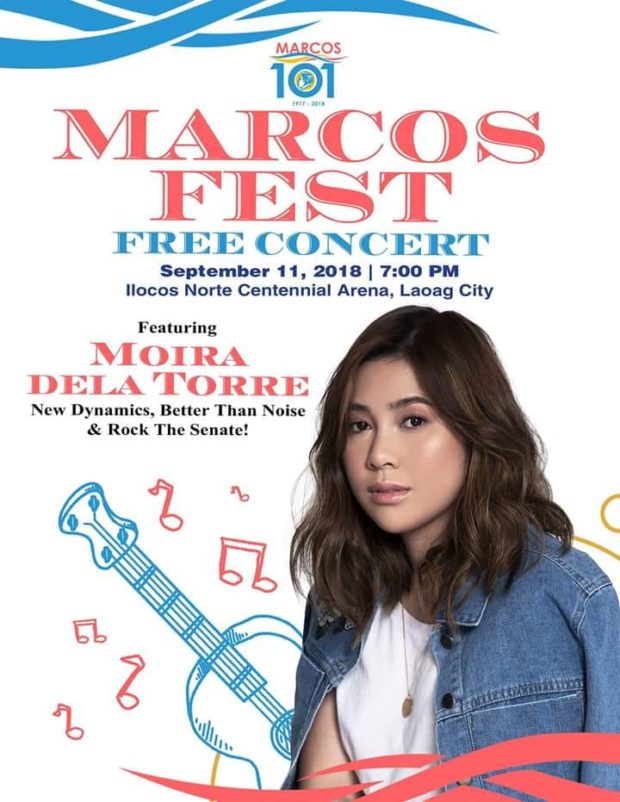 Singer Moira Dela Torre has been criticized by netizens for singing at a Marcos event held last Sept. 11. While she asserted that she was not aware of the concert’s real name and purpose, the provincial tourism office of Ilocos Norte maintains that Dela Torre was correctly informed.

“The name of the event is Marcos Fest (Fiesta) Free Concert. This was clarified and confirmed with the talent agent and her team days before they flew to Ilocos Norte for the show,” said Aian Raquel, head of Ilocos Norte Provincial Tourism Office (PTO), as he stated in an online interview with INQUIRER.net.

“There is no way that Moira herself would have missed this as posters were all over her fan pages,” Raquel added. He stated that the event was organized as part of the activities commemorating the 101st birth anniversary of former President Ferdinand Marcos. The event was also publicized and promoted on social media by the Facebook page “Marcos Centennial.”

Raquel told INQUIRER.net that while the event was privately-funded, the PTO assisted in the coordination of the commemoration activities.

“The facts are simple — we invited Miss Moira Dela Torre to perform her hits and not to play politics,” Raquel explained. “She accepted the gig and we respectfully hosted her here until she left. The venue was packed with gracious Ilocanos who were excited to see her before the devastation of Ompong. Photos and videos will show that Moira had fun on stage, not a hint of unwillingness to perform.”

“We never expected that she would tweet that she is angry for performing at Marcos Fest while we are inundated with the damage of Ompong,” Raquel lamented. “Remove all politics and cultural subjectivities and you get the basic and simple issue of courtesy, reciprocal decency and common sense.”

Raquel earlier called out Dela Torre on Facebook, further pointing out that Dela Torre knew beforehand that the event was named “Marcos Fest.”

“Don’t make it seem like we lied to get you to perform,” he said through a Facebook post yesterday, Sept. 16. “Ask your agent and your manager about it and please, don’t blame the ‘producers.'”

He then stated that Dela Torre, who was supposed to perform at 10 p.m., was late for 20 minutes and had a “bad, sickly voice.”

“But now that you are complaining about performing at an event where [your] requirements and demands were given, including your fee, bakit parang nambabastos ka (why does it seem like you’re being rude)?” he asked.

INQUIRER.net has reached out to Dela Torre for her comment on the issue.

Dela Torre first made her assertions of not knowing about the real name of the event as “Marcos Fest” through her Twitter comments on netizen and fan queries last Saturday, Sept. 15.

When one netizen, Jericho Rayel Timbol (@jerichorayel), pointed out that Dela Torre singing at a “Marcos Event” was worse than her now-deleted 2016 tweet pertaining to President Rodrigo Duterte, she stated that she had been informed that the concert’s name was “Ilocano Millenial Night.” She then declared she is not a “Marcos Apologetic” (sic) and blamed the concert’s producer for his/her failure to correctly inform her of the nature of the concert.

How Moira Dela Torre saved a fan with lupus