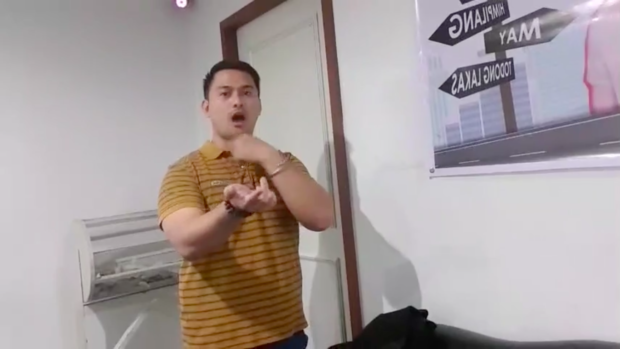 In a now-viral post shared by netizen Angelo James F. Esperanzate yesterday Sept. 15, a clip of Olivar can be seen, wherein he mimics sign language. Uson can be heard laughing while filming Olivar. The post has garnered over 5,000 shares while the video clip alone has been viewed over 370,000 times, as of this writing.

The full video was originally uploaded by Uson in Mocha Uson Blog at Facebook on Thursday, Sept. 13, as a plug for their DWIZ noontime radio show. The part where Olivar does his comical version of sign language can be seen at the beginning of the video. This video post has gone viral as well with about 128,000 views, as of this writing.

“Ano yun? (What’s that?)” commented Uson who was laughing while filming. Not long after, Olivar can be heard making sounds, as if in imitation of deaf and speech-impaired people.

YOU NEVER MAKE FUN OF DEAF PEOPLE!It's not about intelligence, it's about character and morality. Duterte supporters…

“You never make fun of deaf people!” Esperanzate wrote. “It’s not about intelligence, it’s about character and morality.”

“Duterte supporters care about no one else but themselves. This shameful display is a perfect example of that,” he added. “Kung natutuwa nga sila na pinapatay ang mga kabataan, what more ang isang language ng isang komunidad.”

(If they are happy that the youth is being killed, what more [would they care about the] language of one community?)

One netizen, Arden Glenn, commented that while Olivar was the one mainly at fault for making fun of sign language, Uson is also liable as she made use of her phone to film and upload the video on her Facebook profile.

(What she’s doing can be considered a “cancer”… Don’t implicate all Duterte supporters.)

One commenter, Riz Gonzales, noted that Olivar issued a public apology on the comment section of Esperanzate’s post which Olivar deleted not long after. The said netizen uploaded a screengrab of the now-deleted comment.

“I am writing this note to express my profuse apologies to the deaf community members and to their loved ones who may have been hurt with my ‘own style of sign language’ right before our TMD show in DWIZ last Sept. 14, 2018,” wrote Olivar. “I may have used the same gestures whenever I communicate with my uncle who also happens to be a deaf.. and it was effective between us because we understand each other especially when supplemented with much emotions.” 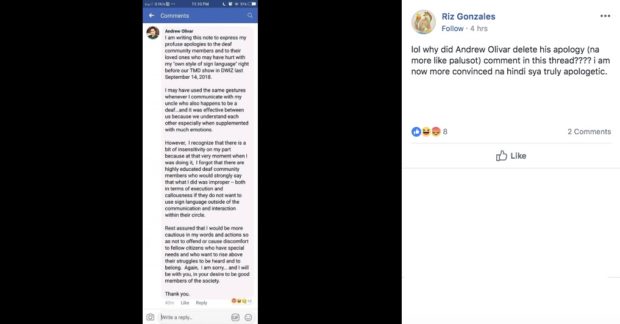 Olivar further stated, “However, I recognize that there is a bit of insensitivity on my part because at that very moment when I was doing it, I forgot that there are highly educated deaf community members who would strongly say that what I did was improper — both in terms of execution and callousness if they do not want to use sign language outside of the communication and interaction within their circle.”

“Rest assured that I would be more cautious in my words and actions so as not to offend or cause discomfort to fellow citizens who have special needs and who want to rise above the struggles to be heard and to belong,” Olivar added. “Again, I am sorry… and I will be with you, in your desire to be good members of the society.”

“As declared by the United Nations Convention on the Rights of Persons with Disabilities (UN-CRPD), Sign Language is a human right of Deaf people. The Sign Language is an official language, and an official form of communication used by the Deaf community in the Philippines and from all over the world,” the UPD College of Education Student Council stated. “It is not in any way acceptable for anyone, regardless of his/her position in the society, to imitate or to use the language for fun/entertainment as it is blatantly disrespectful and is an outright form of discrimination to the culture and to the members of the Deaf community. ”

[STATEMENT ON MOCHA USON AND DREW OLIVAR'S MOCKING OF THE SIGN LANGUAGE]Just recently, a video of blogger Drew Olivar…

The Student Council pointed out that Uson and Olivar violated Republic Act (RA) 9442, an act amending RA 7277 known as the “Magna Carta for Disabled Persons, and for Other Purposes.” RA 9442 states “no individual, group, or community shall execute any acts of ridicule against persons with additional needs in any time and place which could intimidate or result in loss of self-esteem of the latter.”

Uson and Olivar, according to the Student Council, specifically violated section 39 of the said law: “Section 39 of Chapter One defines public ridicule as an act of making fun or contemptuous imitating or making mockery of persons with additional needs whether in writing, or in words, or in action due to impairment/s.”

The Student Council is imploring Uson to issue a public apology. They are also calling for the administration to impose appropriate sanctions on the two, asking for the firing of Uson.

Aside from Olivar, Uson is joined in the video by Atty. Trixie Cruz-Angeles.

This is not the first time Uson and Olivar were criticized for their remarks on the live videos uploaded in Uson’s Facebook account. They have been called out before for insulting actress Cynthia Patag, as well as performing the infamous “Pepedederalismo” jingle.

Uson and Olivar have yet to comment or issue an official statement on the matter, as of this writing. JB