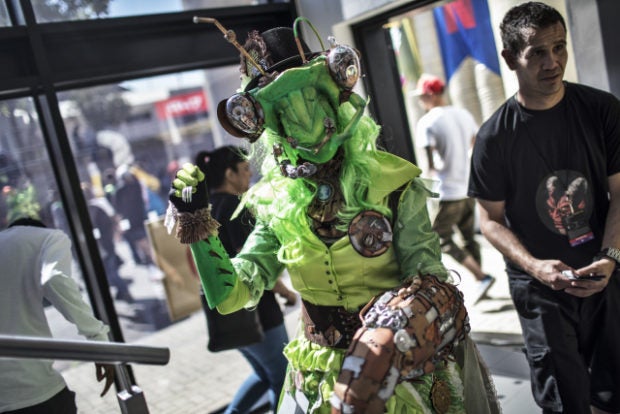 A cosplayer poses during the first ever multi-genre entertainment comic and fan convention Comi Con Africa in Johannesburg, on September 14, 2018. Image: Marco Longari/AFP

Dressed as zombies, superheroes, villainous ogres and masked angels, thousands of fans flocked to Africa’s first Comic-Con on Friday for the start of the three-day event outside Johannesburg.

Tickets for the comic, animation and gaming convention were sold out before the gates opened, with 18,000 people expected on each day, and organizers appealing for fans without tickets to stay away.

“We have brought Comic-Con to the African continent for the first time and it is hugely exciting,” event director Carol Weaving told AFP. “We have been trying for five years to get it here.

“It is long overdue. There is a huge culture here wanting this, ranging from comic book artists and gaming and ‘cosplay’ (costume play) — so many people are dressed up.

“It is a complete sell-out and fans have been desperate to come.”

“When we first saw the announcement (about the event), this was just going to happen,” said comic fan Jaco Viljoen, dressed as Batman arch-villain Bane, surrounded by his family —  including Superwoman, Thor, Harley Quinn, Ironman and a tiny baby Hulk.

“We all love comics. I think this event has shown we are serious about comics and we want to see more,” he said. “We want it to happen every year if not more.”

South African animator Mike Scott, who created Moosebox for Nickelodeon, said the convention — held at a car racetrack — was a major showcase for African talent.

“I went to Comic-Con San Diego in 2006 and it blew my mind, so for it to come full circle and for me be at Comic-Con in South Africa is surreal and huge moment, we are so proud,” he told AFP.

“It is amazing for the industry and kids can see something that just ignites their interest. There is a massive audience out there.” MKH