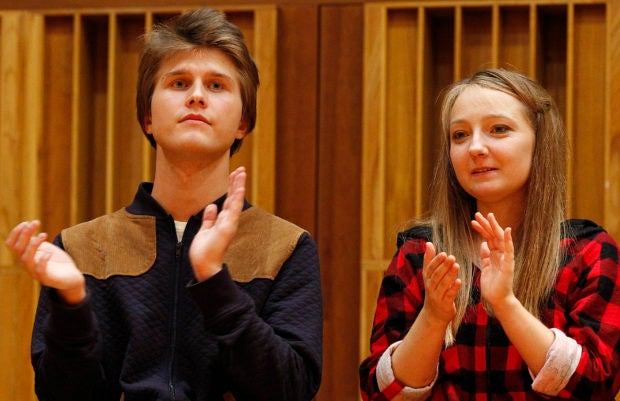 Aleksandra Swigut, right, applauds Tomasz Ritter, left, of Poland who is declared the winner of the 1st Chopin Competition on Period Instruments in Warsaw, Poland, Thursday, Sept. 13, 2018. The announcement took place after each of the six finalists played a Chopin concerto accompanied by the Amsterdam-based Orchestra of the 18th century. Image: AP/Czarek Sokolowski

The announcement by the 11-member international jury came after each of the six finalists played a Chopin concerto accompanied by the Amsterdam-based Orchestra of the 18th Century with conductor Grzegorz Nowak.

The competition’s sponsors, the National Frederic Chopin Institute and Poland’s state Radio and Television, want to encourage young pianists to explore the original sound of music written by Poland’s best-loved composer and by his contemporaries.

One of the jury members, Janusz Olejniczak, told The Associated Press that historical instruments require a different playing technique but also broaden the pianist’s skills and approach to music.

Special prizes from the orchestra went to Ksiazek and Swigut. The orchestra’s musicians specialize in 18th and early 19th century music and play on period instruments.

Chopin was born in 1810 in Zelazowa Wola near Warsaw, to a Polish mother and a French father. He received his music education in Warsaw and started composing and giving concerts there. He left Poland at age 20 and settled in Paris, Europe’s center of art and music at the time. He composed mostly for the piano and much of his work was inspired by Poland’s music, such as the polonaise and the mazurka dances.

The competition was part of Poland’s celebrations of 100 years of regained independence. The next one is to be held in 2023. CC

The song of a house