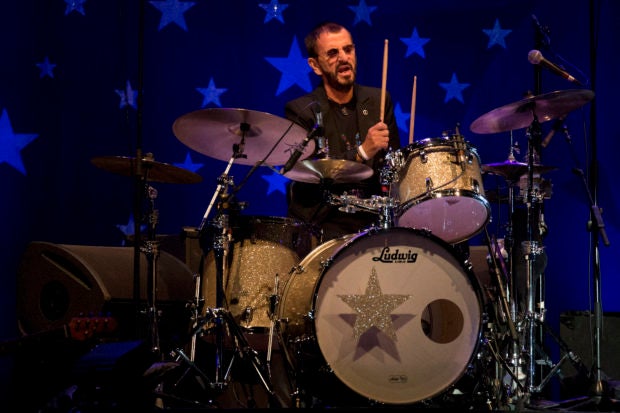 Within a week of Paul McCartney playing a surprise show at Grand Central Station, Ringo Starr followed a more old-fashioned path Thursday night. The drummer and singer headlined a two-hour show at Radio City Music Hall, with thousands spending much of the performance standing and cheering along.

“We love you, Ringo!” one fan called out, and Starr shouted greetings in kind.

It was not a time for lamenting the state of the world. The beloved ex-Beatle wore black, but bright stars hung above the stage and peace signs beamed from behind. Starr’s message for years has been peace and love and a happy look back, whether through such Beatles and solo favorites as “Yellow Submarine” and “Photograph” or through the songs of his current set of sidemen.

Since the 1980s, he has toured and served as master of ceremonies with a rotating cast of rock stars of a certain age, what he calls his “All Starr Band”. On Thursday, he shared a generous amount of stage time with Colin Hay of Men At Work, Gregg Rolie of Santana, Steve Lukather of Toto and Graham Gouldman of 10cc.

Audience members spanned three generations. They may have come to be in the presence of a Beatle, but they also shared flashbacks of early MTV with such hits as Men At Work’s “Down Under” and Toto’s “Africa” and cheered on the old Santana jams “Black Magic Woman” and “Oye Como Va”.

At 78, Starr seems the least burned out of performers and the least changed from his prime, moving about the stage with the lightness of a man decades younger, his baritone showing no effects from his years of smoking.

After joking early on about his struggles to write, he performed his self-composed “Anthem” — for “peace and love” as the song goes. But the show builds up to his real signature song, and long-running tribute to his place in the world: Lennon-McCartney’s “With a Little Help from My Friends”. He didn’t need to introduce it, and hardly needed to sing it. He held out the microphone to the crowd and everyone seemed to join in. CC