Wil Dasovich swims in Pasig River to raise awareness: No discipline, no progress 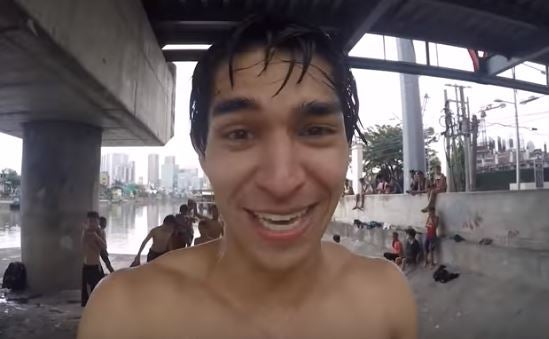 Vlogger Wil Dasovich is known for creating videos that push the limit or go beyond the conventional and that may even be tagged as “crazy” by some. It’s unknown just how far Dasovich would go beyond his comfort zone in the name of vlogging, but recently he took the medium to an entire new level when he went swimming in the Pasig River.

“Gross,” “dangerous” and “life-threatening” are just some of the words Dasovich used to describe his own vlogs, but he maintains that there is a purpose behind these than just mere gonzo.

In the video, Dasovich can be seen with his two female friends from California. Dasovich shared it was his friends’ first time in Asia and chanced upon the Pasig River while exploring the city. As the trio watched a group of kids diving into the river, Dasovich pranked his two friends and convinced them to swim in its waters, in all its refuse and garbage. There was one catch, though: he had to swim with them, too.

As they joined the group of kids frolicking by the water, it didn’t take long until Dasovich and his friends took the plunge and dove in.

His prank, however, didn’t go the trajectory he hoped for as his friends actually enjoyed swimming in the river and even went back to dive in again.

“Wait you guys, you know this is a prank, you’re not supposed to be swimming here, this is a prank,” Dasovich told them. “They don’t understand that this was a prank. Well, I guess they’re having fun diba.”

Dasovich’s vlog may ostensibly seem like just another crazy antic of his, but it carries with it an even bigger message. In the end of the video, Dasovich told his viewers that it wasn’t long ago when the Pasig River used to be beautiful and glorious.

“Just a few years back within my lifetime the Pasig River  used to be a glorious thing, like a natural water park that flowed to the middle of Manila.”

He said, “It can become that again, if we all just do our part… It’s really easy to blame the government and the private sectors but at the end of the day it really comes down to us, you, me. Without discipline, there won’t be progress.”

Not all hope is lost and the Pasig River, through the collective effort of various individuals, is well on its way in its being rehabilitated.

In August, the Pasig River Rehabilitation Commission (PRRC) announced on Facebook that the river was selected as finalist in the first ever Asia Riverprize by the prestigious International River Foundation. Although the Pasig River was declared “biologically dead” in the 1990s, the PRRC stated that its development continues to be a “work in progress.”

PRRC wrote, “Many areas along the historic river have already shown signs of aquatic life and it has already become conducive for transport, recreation and tourism.”  /ra

Read Next
No tension despite Sharon and Kiko’s ‘conflicting’ political affiliations—and here’s why
EDITORS' PICK
Rise to perfection: Spot on tiles for your stair risers
Isko Moreno has no problem making his SALN public if elected president
Step up your vlog game with vivo’s newest smartphone
PNP checks all presidential candidates in search of the ‘most corrupt’ bet
DOH reports three more fatalities due to Omicron variant
COA special audit on Pharmally deals being finalized; report out by March
MOST READ
Billionaire Manny Villar to become next media tycoon after taking over ABS-CBN frequencies
House panel recommends charges vs Duque, Domingo over COVID response
Marcos Sr. on Marcos Jr.
Jam Magno permanently suspended on Twitter
Follow @CCepedaINQ on Twitter
Don't miss out on the latest news and information.