Russell Hornsby on missing ‘Grimm,’ costar Reggie Lee and film ‘The Hate U Give’ | Inquirer Entertainment

Russell Hornsby on missing ‘Grimm,’ costar Reggie Lee and film ‘The Hate U Give’ 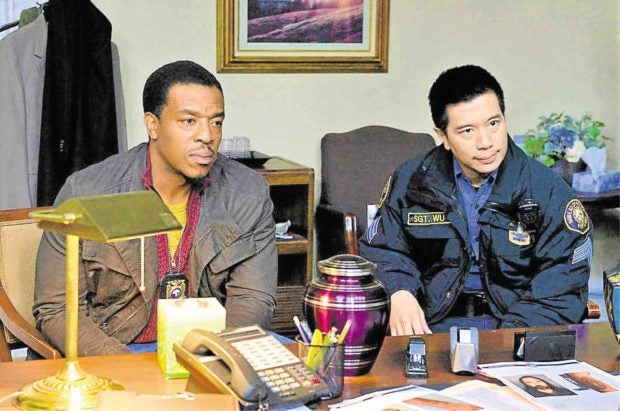 LOS ANGELES–“What I miss about ‘Grimm’ are the people. It is working with people like Reggie Lee, David Giuntoli and the crew—everybody,” Russell Hornsby said about the fantasy police procedural TV series that ran successfully on NBC from 2011 to 2017.

“And we’re both always about the work,” continued Russell who shares a passion for theater with the Quezon City-born Reggie.

The Oakland, California native played football in high school, but got hooked to the stage when he landed the Scarecrow role in a campus production of “The Wiz.”

“Reggie and I went to see shows together,” said the Boston University theater arts alum who went on to study for a summer at Oxford University under the British Academy of Dramatic Arts program. “We got a chance to talk to each other and realized how similar our lives are. And in how we think about the world and humanity. We started having those philosophical conversations, like when you start to get to know people. We have a kinship now.

“Even now, we’re texting each other back and forth—‘Congratulations!’ ‘How are you doing?’ All those things. We have a deep friendship. I have deep love for that man. He’s beautiful. He is one of those people you want to keep with you for the rest of your life.”

The actor, whose theater credits include an off-Broadway production of “Jitney” and the 2010 Broadway revival of “Fences” (he reprised his Lyons role in the Oscar-nominated film adaptation), recalled, “Reggie and I would constantly banter back and forth with musical theater zingers. I say this all the time—my life is ‘Moulin Rouge.’ Which means it’s like a medley of music (laughs).” 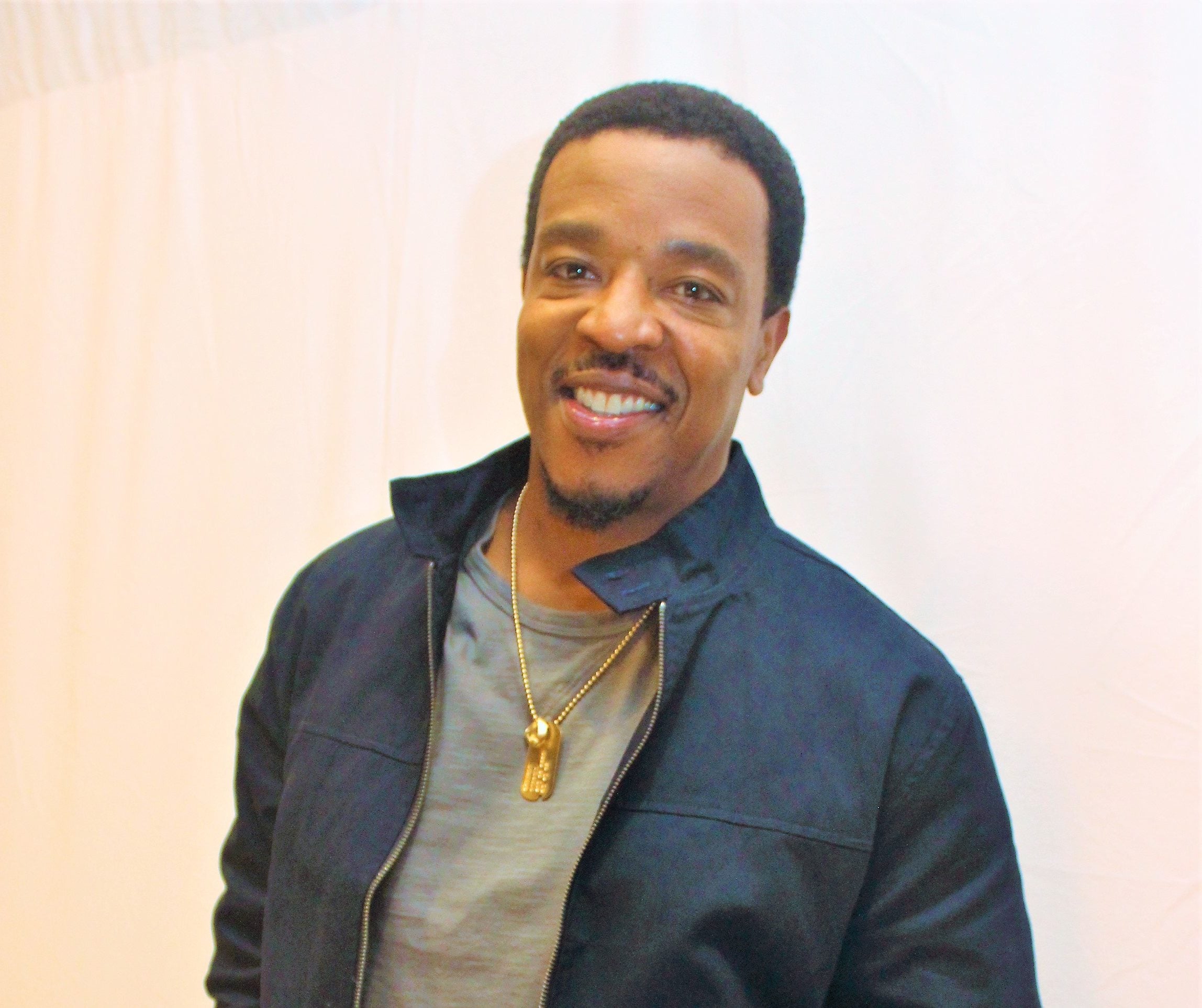 Russell’s other TV credits include Netflix’s miniseries “Seven Seconds,” the coming season of Showtime’s “The Affair” and his new series, “Proven Innocent.”

On the big screen, Russell is cast as Maverick “Mav” Carter in director George Tillman Jr.’s film adaptation of Angie Thomas’ bestselling young adult novel, “The Hate U Give.”

Maverick changed his life as a drug dealer, gang member and convict and became a positive role model in the community and a dedicated patriarch in a family that includes daughter Starr (Amandla). Starr straddles life between the poor, black community she lives in and the rich, mostly white prep high school she attends. When she witnesses the fatal shooting of her childhood best friend by a cop, Starr stands up for what’s right.

Russell himself has been a positive influence in people’s lives. “I feel like it’s something that I’ve been blessed with my whole life—being a role model, an example,” he said.

He cited that he was fortunate to have good mentors in his life who helped him grow into the man he is today. “I don’t have a very good relationship with my father at all. But I’ve had wonderful men in my life. Wonderful role models.

“So, the thing is, I want to be a man of steel, but I want to be malleable. In this day and age, it’s very important that you can be a man of substance, character, integrity, be strong and forthright, and still be able to show emotion.

“The men I was surrounded by, who helped raise me, especially in the world of August Wilson, taught me that.”

The actor welcomed the opportunity to inspire the film’s young cast members. “I realized in this movie that it was my turn to lead. It is my time now. I’m working with Amandla, Algee and all the young people, kids in their 20s, who are going to be looking to me for advice. I had to embrace that. It was incumbent upon me to look at the young kids and give them, as my mentor, Ren Brown would say, ‘A fresh word.’ ” Russell Hornsby with images from “The Hate U Give.” Photo by Ruben V. Nepales

Russell is dad in real life to two sons, ages 1 and 3 years old, with his wife, Denise. “My oldest son’s name is Walker Red. My mother’s maiden name is Red. My wife’s maiden name is Walker. I wanted to bring those families both to light and dignity together. My youngest son is Ronen Lyons. My wife came up with the Ronen. We took Lyons from ‘Fences,’ from the character because that’s where I was at the time.”

A memorable scene in “The Hate U Give” is when Maverick and his family are enjoying a simple dinner in a restaurant. But an incident happens that suddenly finds Russell’s character being forced against the wall by a police officer.

“That, more than anything, is what black men deal with on a regular basis,” Russell pointed out. “It’s that need for restraint, whether it be physically, vocally or what have you, to make others feel comfortable. There’s a wonderful moment that Angie (writer) puts in there, but also that George (director) helps to make plain, is that it’s part of Maverick’s growth. Understanding the world around you, and where you are and that now is not the time.

“But the brilliance of the film and the book is what he (Maverick) is—instilling in his children that there is another way. You don’t have to react. Let’s be cognitive, let’s think our way through this and come at it another way. You can be even more successful that way.

“Again, all these things start from when you’re young, by having parents who were there to help school you. And properly raise and train you into the ways of the world and help you understand all that’s going on around you. And those are things that I think Mav learned the hard way.”

He will be seen next in “Creed II,” with Michael B. Jordan and Sylvester Stallone reprising their roles. “I play Buddy Marcelle, the fight promoter,” he revealed. “In true ‘actorial’ fashion, I did not model him after Don King. I found a figure who I felt is more deeply rooted, more of the terra firma, a guy by the name of Al Haymon, who is Floyd Mayweather Jr.’s promoter.

“I chose a figure who is more reclusive, sort of in the shadows, a puppet master of sorts. So, instead of walking around going, ‘Ha ha ha!’ (he laughs and acts flamboyantly), he’s going, ‘We’ll see’ (he gives a sly look and smiles).”

The man whose journey took him from Oakland to Boston for college, then off-Broadway and Los Angeles for breaks in TV and film feels fortunate. “I have to be honest and say that I’ve been blessed to be a working actor for the last 20 years,” he said. “This month, 20 years ago, I started working consistently when I took a role at the Huntington Theatre Company in Boston, doing August Wilson’s ‘Jitney.’

“I have been a working actor ever since. I can’t ask much more than that.”