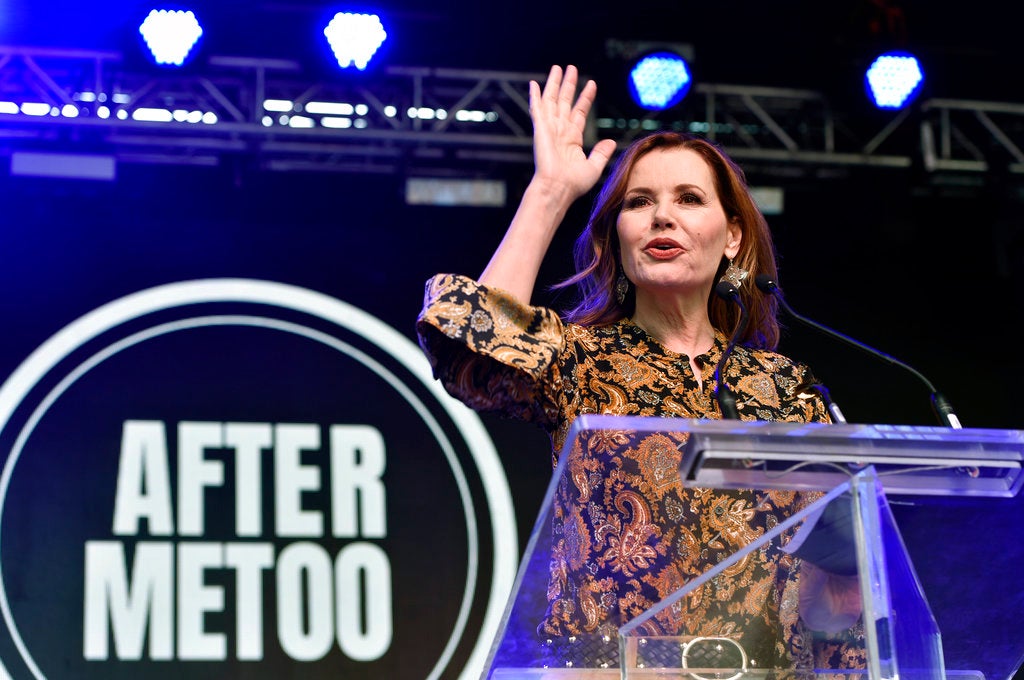 Actress Geena Davis addresses the crowd at the Share Her Journey Rally for Women in Film during the Toronto Film Festival, on Saturday, Sept. 8, 2018, in Toronto. Image: Chris Pizzello/Invision/AP

TORONTO (AP) — Women filmmakers, activists and actors congregated outside the hub of the Toronto International Film Festival on Saturday in a series of impassioned speeches on gender inequality in the movie industry and the power of female voices to overcome it.

The “Share Her Journey Rally,” attended by hundreds on a chilly Toronto morning, followed similar events at earlier film festivals. Ahead of the gathering, Cameron Bailey, co-head of the Toronto Film Festival, signed an inclusivity pledge to achieve gender parity in the festival’s executive ranks and on its board of directors by 2020, a pledge that has been signed other festival leaders. 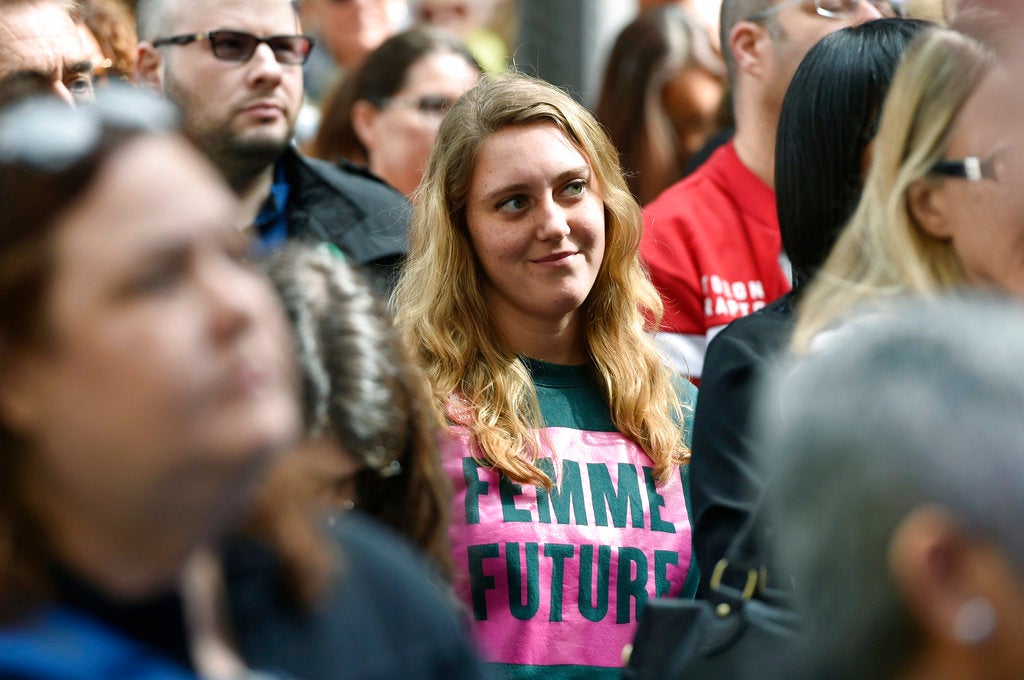 A crowd member listens to remarks from the stage during the Share Her Journey Rally for Women in Film during the Toronto International Film Festival, on Saturday, Sept. 8, 2018, in Toronto. Image: Chris Pizzello/Invision/AP

“Given all the problems that we have in our world, all the sectors of society where there’s tremendous gender inequality, the one area that can be fixed overnight is on-screen,” said Geena Davis, founder of the Geena Davis Institute on Gender in Media. “The very next project that someone makes— the next TV show, the next movie — can be gender balanced. It can be fixed absolutely instantly.”

She added: “No more missed opportunities.”

Davis is also a producer on the documentary “This Changes Everything,” which premiered shortly after the rally on Saturday in Toronto.

“Progress will happen when men take a stand,” Streep says in the film.

Saturday’s rally included tales of personal trials and triumphs and statistics capturing the long-running disparity between men and women in front of and behind the camera. 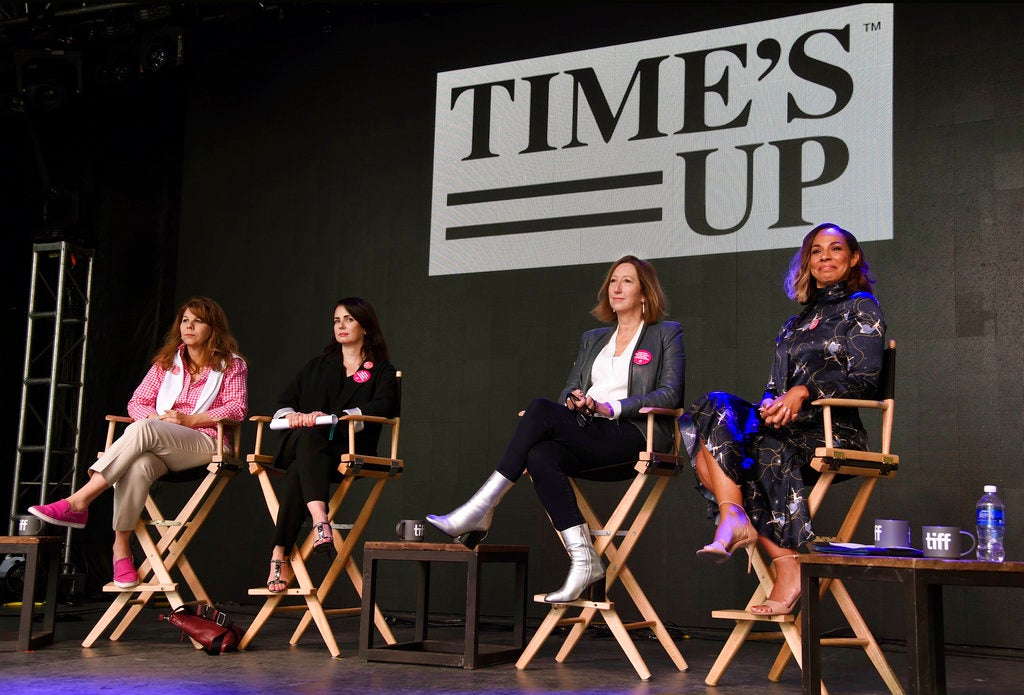 From left, Dr. Stacy L. Smith, founder and director of the USC Annenberg Inclusion Initiative, actress Mia Kirshner, Sundance Institute executive director Keri Putnam and actress Amanda Brugel look on from the stage during the Share Her Journey Rally for Women in Film during the Toronto Film Festival, on Saturday, Sept. 8, 2018, in Toronto. Image: Chris Pizzello/Invision/AP

Stacy L. Smith, whose Inclusion Initiative at USC Annenberg School for Communication and Journalism has been at the forefront of studies focusing on Hollywood’s record of inclusivity, noted that from the top box-office films from 2007 to 2017 included only four films directed by black female filmmakers, two Asian female directors and one Latina director.

“Every day I dream of a world in which the necessity to talk about this is absent, and where my fellow woman artists can speak about their work rather than campaign to do it,” said Amma Asante, the director of “Belle,” ”A United Kingdom” and the Toronto entry “Where Hands Touch.”

Smith is credited with developing the inclusion rider concept, a contractual provision that sets targets of diversity in casts and crews. She applauded WarnerMedia, the parent company of Warner Bros., for launching a company-wide diversity program last week beginning with Michael B. Jordan’s forthcoming legal drama, “Just Mercy.”

“Now, other studios, call us and do the same thing,” said Smith.

Keri Putnam, executive director of Sundance Institute, sought to dispel “the myth that there is a talent shortage” for women behind the camera, noting film schools are typically half women.

The Indian filmmaker and actor Nandita Das said that while she wants to just be treated as a person, “the identity of being a woman just doesn’t leave me.”

“I would like to just be called ‘a director,’ and I used to get a little bit upset at being called a ‘female director,'” said Das. “But now, I don’t know why, for the last few years I’ve started owning it and saying: Yes, I’m a woman director. When we want more women directors, we’ve got to own it. You’ve got to say, ‘Yes, I’m a woman director and I want more of us out here.'”

“We have lots of stories to tell,” added Das. “Please just hear them.” NVG

As curtain goes up in Toronto, new faces fill audiences

Read Next
‘Rascals’ guitarist Gene Cornish expected to recover after collapse
EDITORS' PICK
Get exciting deals and discounts when you download the new McDonald’s App
Batangas execs, Taal evacuees thank House; hopeful on rehab efforts
SM continues to send relief assistance to remote towns in Batangas
PAL: Passengers with flights to parts of China may request for refund, rebooking
5 years after Mamasapano, son of fallen SAF 44 trooper remembers his ‘idol’
‘A greener, cleaner tomorrow’: A how-to guide for Filipinos who want to help with today’s energy crisis
MOST READ
No time for revelry; Tagaytay instead plans for alert level 5
Taal’s sulfur dioxide emission increases
Dina Bonnevie on Coney Reyes: We have forgiven each other
Seized food items from China tested positive for ASF–BOC
Don't miss out on the latest news and information.