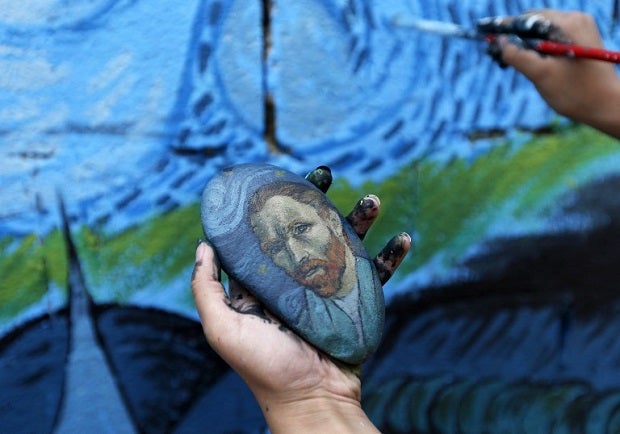 A Yemeni artist holds a stone bearing a portrait of Vincent van Gogh as she paints a mural on a wall during a campaign called ‘Open Day of Art’ in support of peace in the war-affected country, in the capital Sanaa, on March 15, 2018. AFP

VENICE, Italy – When Willem Dafoe was limbering up to play Vincent Van Gogh in a new film about the famously tormented painter, he did something that will give museum curators nightmares for years to come.

He was leafing through a “lost” sketchbook of the artist’s from his time in Arles, when the film’s director — the flamboyant American painter Julian Schnabel — looked at him like a man possessed.

“We had the white gloves on and everything,” Dafoe told AFP, “and we were gently going through it looking at the drawings. Then at one point Julian grabbed my hand and slammed it down on one of the sketches.

“It was like something out of ‘The Exorcist’,” the actor said.

“He was forcing a transmission — a connection between me and Van Gogh — and I think it worked.”

The jury at the Venice film festival clearly agreed. They awarded Dafoe the best actor prize Saturday for his performance in “At Eternity’s Gate”, which The Guardian said had “all the integrity and unselfconscious ease you would expect from this great actor.”

The prize puts Dafoe in pole position for the Oscars, having missed out last year after being nominated for an equally unforgettable turn in “The Florida Project”.

While the authenticity of the sketchbook Schnabel slammed is disputed — the Van Gogh Museum and two major experts on the artist are at war over the issue — Dafoe believes it is genuine.

Both he and the mercurial Schnabel — a famed neo-expressionist artist best known for his huge broken plate paintings — are on familiar territory tackling the furies that drive and sometimes dog great artists.

Dafoe had to grapple with the demons of the great Italian director Paolo Pasolini in Abel Ferrara’s 2014 film “Pasolini”.

Schnabel also brought the tortured life of his old friend on the New York art scene, Jean Michel Basquiat, to the big screen in “Basquiat”.

In that film, the painter — who got four Oscar nods for “The Diving Bell and the Butterfly” — did not pull back from the hell Basquiat endured before his early death from a heroin overdose.

But Dafoe said his Van Gogh film is more than a simple biopic.

“It is not an awards movie” made with one eye on the Oscars. “It is about painting and emotion, it is about being an artist, it is about nature and spirituality… because Van Gogh wanted to be a pastor before he became a painter. He thought the bible was the greatest book ever written,” Dafoe added.

“Painting is something Julian really knows — this is where his two loves come together: painting and film-making.

“It is shocking how much I paint in it. Julian was teaching me how to paint and then we were painting together in Van Gogh’s style.

“I had a real shift in my way of seeing and my relationship to nature through playing Van Gogh and reading what he wrote,” he added.

‘I felt close to Van Gogh’

Dafoe first learned to paint three decades ago for “To Live and Die in L.A.” in which he played an art forger.

He said shooting in the fields around Arles and in the asylum at Saint-Remy — where Van Gogh wrote that “one continually hears shouts and terrible howls as of animals in a menagerie” — gave him goose bumps.

“I felt close to him,” said the actor, who looks spookily like the painter on screen.

Unlike other films about Van Gogh such as the 1956 classic “Lust for Life” starring Kirk Douglas, Dafoe said the new movie avoids “the greatest hits” like the “Sunflowers” or depicting him hacking off his ear when he fell out with Gauguin.

“But for part of the movie he has no ear. We do not shy away from what he did to himself.

“It focuses on the end of Van Gogh’s life and starts right before he meets Gauguin and he goes to Arles,” he said.

“We shot there and in Paris and in Auvers-sur-Oise,” where Van Gogh shot himself — although the film goes with the controversial theory that he was killed after grappling with some local youths.

By filming in so many real locations like Saint-Remy, “part of which is still a hospital, we were flirting with his ghost”, said Defoe.

“I never thought about any other person playing Van Gogh,” Schnabel told reporters in Venice on Monday. “He has such inner depth. To have him with me on set was the best ally I could have.” /cbb