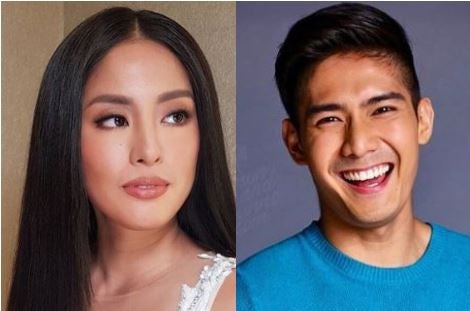 Television host and woman-in-action Gretchen Ho momentarily reunited with former boyfriend actor Robi Domingo on Sunday as they hosted together the  2018 Mr. and Miss Chinatown pageant.

The pageant was held at the SM Mall of Asia Arena last Sept. 2, with contestants Moises Limyuen and Marie Que emerging as the winners of the pageant. Yuen and Que will serve as ambassadors in promoting the Filipino-Chinese community’s rich heritage, culture and traditions. Que, too, is slated to represent the country in the 2019 Miss Chinese International pageant.

Ho took to her Instagram on Monday, Sept. 3, to share pictures of her during the pageant. She shared to her fans that it was her fifth year hosting the pageant, adding that she couldn’t help but be prouder in being a Chinoy (Chinese Pinoy).

“My 5th straight year hosting this pageant and every year I grow prouder and prouder to be Chinoy,” wrote Ho. “From a crowd of 1,500, we’ve now reached almost 5,000! A big achievement for the Chinese Filipinos here in the Philippines.”

In her post, Ho can be seen wearing a long, beaded nude gown by designer Elize Padilla.

“I’m also happy to have grown as a lady with this pageant,” added Ho.”ASIANS are definitely IN.”

Ho and Domingo were together once again as hosts for the grand affair. In the official Facebook page of Mr and Ms Chinatown Philippines, pictures during the grand coronation night showed Ho and Domingo taking the stage together in their best outfits.

In some of the pictures, Ho and Domingo can be seen flanking contestants Brian Gocheco and Carly Chua. The two emerged as the pageant’s 2nd runners-up.

Domingo, on his end, looked dashing in a blue suit. Ho was quite riveting in an emerald gown with a thigh-high slit and muted silver jewelry.

Ho’s emerald number was designed by Rosenthal Tee, who shared an Instagram Story of the two on stage during the coronation night.

Tee shared that “Crazy Rich Asians” was her inspiration behind Ho’s emerald gown. 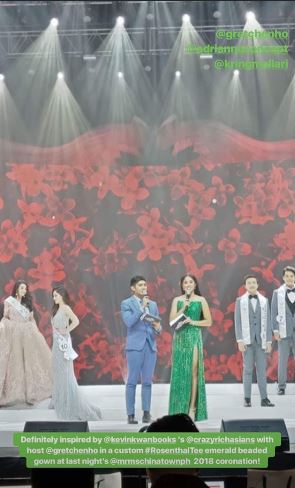 Meanwhile, in an Instagram post made on the same day, Tee shared a photo of Ho posing in her emerald gown while inside the arena, even calling her a “Crazy Rich Asian goddess.”

Robi Domingo admits to being a shy guy