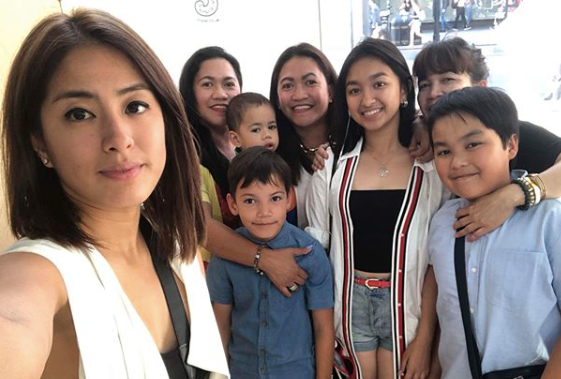 Television host and woman-in-action Gretchen Ho flew to London in end-July for the Prudential RideLondon Classique. Ho was there to support Filipino-American Coryn Rivera, one of the many Filipino riders who participated in the annual cycling festival.

Ho, while out and about in the city, unfortunately got her bag stolen. She was inside a store fitting clothes and realized too late that her bag was already gone. In it were her passport, cards, money and cellphones. But despite this hiccup in her trip, Ho took to her Instagram and shared to her fans that she had been counting her blessings amid all the bad luck.

“Been having bad luck the past two days. Not only did my bag get stolen with everything in it (passport, cards, money, phones), we also got locked out of our AirBNB (keys with no landlord),” wrote Ho last Aug. 3. “But I’m counting my blessings. So many people have helped me the past days.”

As per Ho, fellow Filipinos came to her aid when she became panic-stricken after the incident. She was talking to the manager of the store when a group of Filipinos passed by her as if by chance.

“Serry Sadicon & the Buñags, Filipinos who were there with me right when my bag got stolen. It was coincidental that they passed by me in the store while I was panicking and talking to the manager,” narrated Ho.

The kind Filipinos let Ho use their phones so she could make the necessary calls. They, too, bought her food and stayed with her until her friend came to pick her up.

Blessings upon blessings came to Ho. Apart from the Filipinos who came to her aid, there were also random people who made her day with their little acts of kindness, making her trip to London all the more worthwhile.

“And then these random people today … waiter Ahmed from Egypt who gave me an extra refill of brewed coffee, uber driver Buvi from Sri Lanka who bought me iced coffee,” Ho wrote. “And of course, the Philippine embassy which has been very accommodating. Thank you everyone for your kind hearts.”

Ho was moved as she expressed her gratitude to all those who helped her and showed her kindness. “I’ve never felt so vulnerable & helpless but God has been gracious. Thank you everyone.”

Ho, too, seemed to have learned her lesson as she took to her Instagram last Aug. 11 to share tips to her fans on how to travel to London.

In the picture she shared, she can be seen carrying a backpack in front of her body instead of wearing it the usual way.

“Don’t wear a backpack because you are bound to put it down sometime. Better to bring a small slingbag you can place in front of you,” advised Ho. “If you do bring a backpack, wear it like this! Don’t put your bag down.. ever!!!”

Ho also told her fans to refrain from bringing their passport  if they’ll be going to a crowded place. She instead told them to bring a photocopy of it.

“Just bring a photo copy of your passport and leave the original in the hotel. I brought it with me just in case I needed to show it for tax rebate or for security purposes. But if you’re going to a crowded place like Oxford st. No no!!”

Moreover, Ho shared that she’ll be getting an international credit card so “I can get it replaced abroad if ever I lose it.”

She also told her fans not to bring too much cash with them. “Hide it in different places in your luggage or clothes. Didn’t listen to mom on this and I guess I matured a lot from this trip.”

Ho, as per her earlier post, shared that they got locked out of their Airbnb. To avoid similar incidents in the future, she advised her fans to always ask for two sets of keys from their Airbnb host.

“Ask for 2 sets of keys from your airbnb host. Ours worked office hours so they couldn’t be contacted past 5pm,” shared Ho. “For our second airbnb, we didn’t even meet the host at all. So if you could also get a direct line, better!”

And lastly, Ho advised her readers to always keep it simple abroad.

“Don’t look too ‘touristy,’” said Ho. “Thieves are rampant not just in London, but also in Spain, Italy and Paris! They even grab phones while you’re using them. They’re just all over.” CC /ra

WATCH: Gretchen Ho goes for an extreme plane ride — on its wing