Bono says ‘back to full voice,’ U2 tour will resume 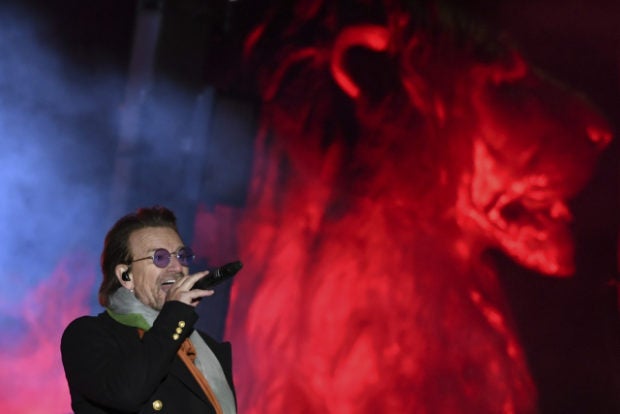 U2 frontman Bono has said he will be “back to full voice” for the rest of a European tour after the Irish rock band was forced to cancel a gig in Berlin when they were only a few songs in. Image: AFP/Chris J. Ratcliffe

U2 frontman Bono has said he will be “back to full voice” for the rest of a European tour after the Irish rock band was forced to cancel a gig in Berlin when they were only a few songs in.

Thousands of fans were left disappointed on Saturday night when the band’s set was abruptly canceled after Bono appeared to be unable to sing.

“It’s not right for you. It’s useless,” he told fans from the stage after pausing to drink from a thermos before the show was eventually called off.

But in a statement released through his publicist late Sunday, Bono said he had recovered his vocal health and that the tour would continue as planned.

“I’ve seen a great doctor and with his care I’ll be back to full voice for the rest of the tour,” the 58-year-old singer said.

“So happy and relieved that anything serious has been ruled out.”

He added that his joy was “tempered by the knowledge that the Berlin audience were so inconvenienced.”

But he said the band will return to Berlin at the end of their tour to play a new gig on November 13th for those who missed out on Saturday.

The statement will come as a relief to U2 fans across Europe with tickets for upcoming shows.

The band’s next scheduled concert is in Cologne on Tuesday before they head to France, Portugal, Spain, Denmark, Germany, the Netherlands, Italy, Britain and Ireland.

At the first Berlin show on Friday, Bono condemned the recent far-right violence in the eastern German city of Chemnitz.

During the concert, the slogan #wirsindmehr (we are more) used by counter-protesters in Germany against the far-right was also projected on the stage, to cheers from the crowd. CC

U2 top-paid musicians in US last year — survey