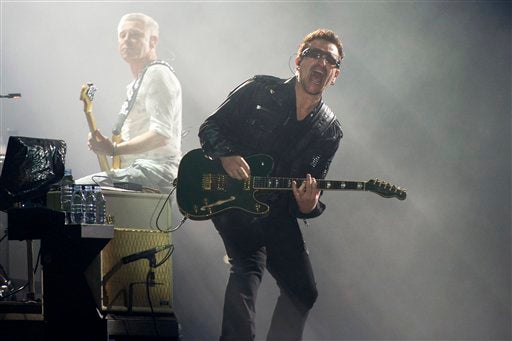 BERLIN — U2 lead singer Bono is reassuring fans that he’ll have his voice back for the rest of U2’s European tour after ending a concert in Germany Saturday night, which they are rescheduling.

In a statement posted Sunday to U2’s website, Bono says that a doctor has ruled out anything serious related to his loss of voice during the performance in Berlin. He says his relief is tempered by the knowledge that he Berlin audience was inconvenienced, adding that he can’t wait to get back there on Nov. 13 for a rescheduled show.

Bono suffered a “complete loss of voice” at the band’s Saturday night show at Berlin’s Mercedes-Benz Arena, causing the engagement to end early. The 58-year-old frontman made it through the U2 hit “Beautiful Day” with the help of the audience, German news agency dpa reported Sunday.

Concertgoers first were told there would be a short break and eventually were informed the show was over, dpa said. They were advised to keep their tickets for a replacement performance.

U2 opened the European segment of its 2018 “Experience + Innocence” tour in Berlin on Friday. It has a sold-out show scheduled in Cologne on Tuesday and a second concert in the German city on Wednesday before back-to-back performances in Paris on Saturday and Sunday.

A note on U2’s website said ticketholders should expect more information from Live Nation regarding the rescheduled Berlin show on Monday.

Read Next
Moises Lim Yuen, Marie Que proclaimed 2018 Mr. & Miss Chinatown
EDITORS' PICK
SM continues to send relief assistance to remote towns in Batangas
Batangas execs, Taal evacuees thank House; hopeful on rehab efforts
‘A greener, cleaner tomorrow’: A how-to guide for Filipinos who want to help with today’s energy crisis
5 years after Mamasapano, son of fallen SAF 44 trooper remembers his ‘idol’
Get exciting deals and discounts when you download the new McDonald’s App
PAL: Passengers with flights to parts of China may request for refund, rebooking
MOST READ
Taal’s sulfur dioxide emission increases
No time for revelry; Tagaytay instead plans for alert level 5
Dina Bonnevie on Coney Reyes: We have forgiven each other
Megan Young, Mikael Daez get married
Don't miss out on the latest news and information.