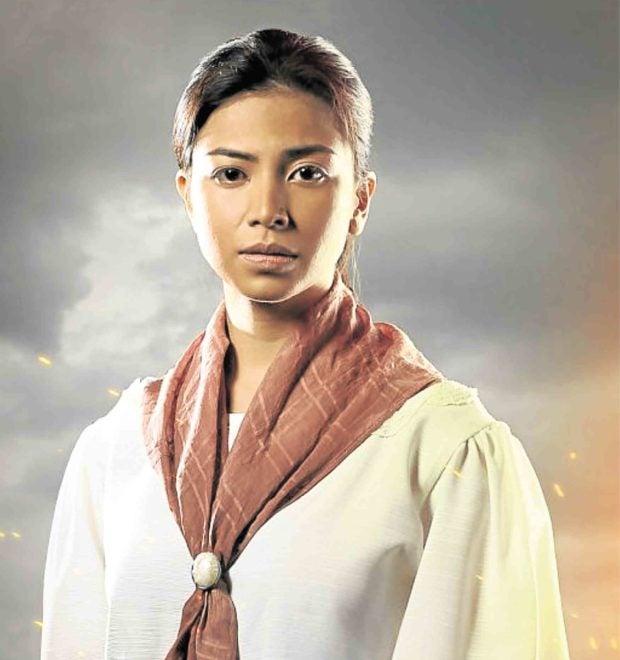 Seems singer-actress Glaiza de Castro has an affinity for music from the 1970s.

For Jerrold Tarog’s historical epic “Goyo: Ang Batang Heneral,” producers tapped Glaiza to rerecord “Bato sa Buhangin,” yet another pop classic from the ’70s, this time by the band Cinderella.

“I was surprised when (producer) Joe Alandy called me up and said that Direk Jerrold wanted me to sing for the film,” Glaiza told the Inquirer.

She had to wait for a while because securing the rights to the song entailed quite a circuitous process. “When we finally got to the recording studio, I was so excited and ecstatic to be part of an epic film. I felt kilig (thrilled) when I heard the song for the first time.”

She couldn’t pinpoint the exact moment when she first heard “Bato sa Buhangin.” “Maybe it was through my parents or during one of those family reunions and an aunt or uncle played it.”

One thing’s for sure, though: “It’s one of those classic OPM songs that I really like and I even suggested it to be part of my album, ‘Magandang Simulain.’ I had that song in mind when I recorded the track, ‘Sinta.’”

For her new rendition of the Cinderella classic, she made sure to sing it differently while staying true to the original.

“The emotion is still there,” she explained. “We just made it more somber, I think. During recording, Direk Jerrold described how he had envisioned the song and the scene. So, he made me think of mountains and rivers while I was singing. It was a bit modernized, in terms of interpretation, but the arrangement was somehow similar.”

Glaiza’s parents, who were part of a band in the ’70s, introduced her to the era’s musical gems.

What about 1970s music does she find inspiring?

“Perhaps the message of the songs… how relevant they are until today,” she pointed out. “When you pay attention to the lyrics, it makes you realize how music can be used as a weapon for change.”

She would like to explore more opportunities in the music world. “Of course, it’s my first love and I’m willing to study to be able to create more songs in the future. I’m going to London by the end of September to check out some schools, then decide where I’m going. I plan to take up music production.”

She yearns to return to the recording studio, pronto! “I’m definitely coming up with another album after (the GMA 7 afternoon soap) ‘Contessa.’”

“There’s a movie offer, and they’re talking to my management already,” she volunteered.

How about a historical epic, like her acclaimed Kapuso series, “Katipunan”?

“It’s always exciting to be part of a historical project!”