Paramore back with a new sound and renewed spirit | Inquirer Entertainment

Paramore back with a new sound and renewed spirit 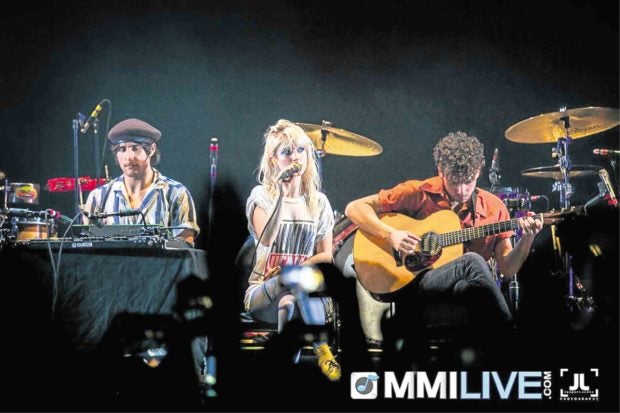 It had been “five long years” since the rock band Paramore played in Manila, stressed lead vocalist Hayley Williams, and “a lot had happened” since then.

“We have been through some stuff,” Williams added.

By “stuff,” she meant disputes, both personal and legal, within the already fractured band, which ultimately forced bassist Jeremy Davis to leave. She wrestled with depression. Coming out with a new record seemed impossible. She considered starting a new group and, at one point, thought about quitting altogether.

But there she was on the SM Mall of Asia Arena stage, rendered momentarily speechless by the outpouring of love, after a stirring performance of “Misguided Ghosts.” The fans chanted, “We love you! We love you!” The cheers and screams grew louder and wouldn’t let up. And as she surveyed the packed crowd, she couldn’t help but mouth, “This is crazy… beautiful.”

Finally, she found the words: “We’re so far away from our hometown. But it feels really nice to be here … We love you.”

Somehow, the band weathered the storm. And while it lost a vital piece, it regained an old one—drummer and founding member Zac Farro, who walked away in 2010. Now, the group is back with a new sound and a renewed spirit to go with it.

“After Laughter,” the Grammy-nominated band’s fifth album, marked Paramore’s departure from its alternative rock and pop-punk roots, and the beginning of its foray into new wave and synth-pop.

Much of the new songs are tinged with sadness; they allude to frustrations and past turmoils—all of which, however, are deftly camouflaged in danceable beats and vibrant synths.

“Rose-Colored Boy” talks about struggling with anxiety in a society that pressures everyone to be happy. And yet, the song is peppy and catchy. “Caught in the Middle,” on the other hand, is a funky bop about letting go of nostalgia in order to move forward. 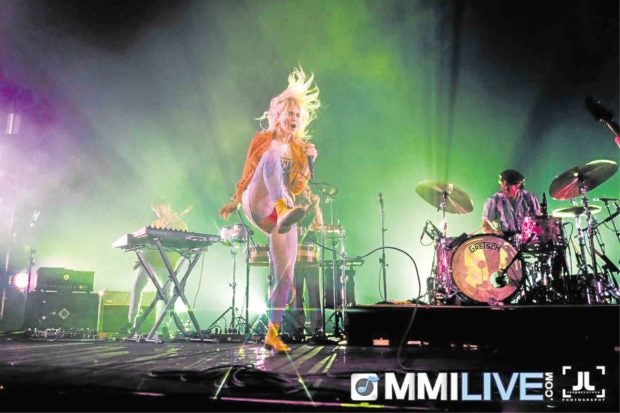 The gentle ballad “26,” however, drops all pretensions and wallows in its melancholy. “Survival will not be the hardest part,” Hayley sang. “It’s keeping all your hopes alive / When the rest of you has died.”

Still, Hayley found enough reason to smile through the performances. “It’s our favorite record to date … It has been such an amazing journey to play this album in front of you,” she said. “Tonight, everything feels new all over again.”

She admitted that there was a lot of lost time she had to make up for. She didn’t waste a single second. At 29, Hayley is a more hardened artist, but that didn’t take away her spunk and exuberant showmanship. Indefatigably, the singer-songwriter—who changed her signature red hair for platinum blonde—hopped, twirled and kicked like a can-can dancer, as she marched from one song to another.

In the bouncing “That’s What You Get,” one of the band’s most popular hits, Hayley furiously banged her head to the cadence of the thumping drums, which elicited screams so deafening they drowned out her voice. “Ignorance,” another well-loved banger, was relentlessly frenetic and had Hayley flailing about onstage.

Midway through the show, mounted by MMI Live, Paramore provided respite from all the intensity. Sitting side by side with Zac, guitarist and keyboardist Taylor York, Hayley—a formidable vocalist with a vibrant, cutting tone—delivered a dreamy cover of Drake’s “Passionfruit,” which showed the softer side of her singing.

“We’ve been touring since 2005. It’s 2018. We’re lucky to still be doing this. Thank you for keeping us afloat. It has been an incredible ride, growing up together with you,” Hayley said, raising an imaginary glass.