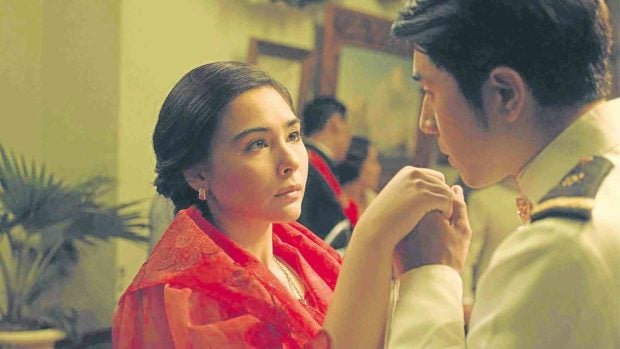 “When I saw Remedios’ picture as an older woman, I was amazed because she looked a lot like my maternal grandmother Maxima Zamora,” the French-Italian-Filipino beauty related.

She started preparing for the plum part even before the audition. “The script was in old Tagalog, so I worked with a Filipino teacher because I wanted to be fluent in the language.”

At first, she thought Remedios was mataray (surly), a strong woman. “I imagined she had to be that way because she was the eldest in her family and she had to take care of her younger siblings.”

As the shoot progressed, however, Remedios’ true nature became much more apparent to her. “I realized that she was just an innocent girl who fell in love for the first time. Everything was new to her and she didn’t know what to expect.”

The romantic angle is one of the elements that make TBA’s “Goyo” different from its predecessor “Heneral Luna,” Gwen pointed out. “There aren’t as many action sequences and it is more emotional.”

She noticed that the filmmaker had endeavored to deviate from the “Heneral Luna” template during the shoot. “Direk Jerrold was reluctant to put the hero on a pedestal. He wanted to present Goyo not just as a hero, but also as a leader, as a person, as a friend, as a lover. He wanted to show the different aspects of Goyo’s personality.”

Working with Direk Jerrold proved to be an enlightening, edifying experience for Gwen.

“Honestly, I was scared at first,” she confessed. “He was very quiet on the set. He seemed serious, but he also has a fun side.”

She was awed by how organized the entire mammoth production was.

“I suppose it’s like working on a Hollywood set,” she quipped. “When I got my call sheet, everything was there: from the time of the sunrise and sunset to the weather report. Each shot was scheduled: The closeup at 8 a.m., the medium shot at 9 a.m., et cetera.”

When she reached the set in Tarlac, she was flabbergasted.

“The crew built a town from scratch,” she recounted. “It was like traveling back in time. Looking at the façade of the buildings, you’d think it was a real town plaza. But behind the houses were scaffolding and bamboo poles.”

Yes, the production design was astounding, but the costuming proved a bit as challenging as the tongue-twisting lines of dialogue.

“My baro’t saya had four layers: the camisole, the underskirt, the overskirt, the top, plus the shawl. Good thing, the staff didn’t put in as much cornstarch, so my costumes weren’t as stiff, itchy and heavy,” she volunteered.

According to Gwen, lead star Paulo Avelino, who plays Goyo, was a consummate pro. “He was very focused on the set. He wanted to give his all to the film.”

They got to share the screen years before, in old GMA 7 shows, like the afternoon soap “Alakdana.”

“Paulo was my first onscreen kiss,” she enthused.

She feels fortunate that she gets the chance to do independently minded, and produced, films like Mario Cornejo’s “Apocalypse Child” and David Fabros’ “Straight to the Heart,” which earned her good notices and nominations from awards’ groups like the Urian, Film Academy and CineFilipino.

“I like doing indie films because the stories are fresh, and there’s freedom to express yourself as an artist,” she remarked. “You are not limited by the need to please the audience.”

Rodriguez: 50-year cap applies to every franchise issued, not cumulative