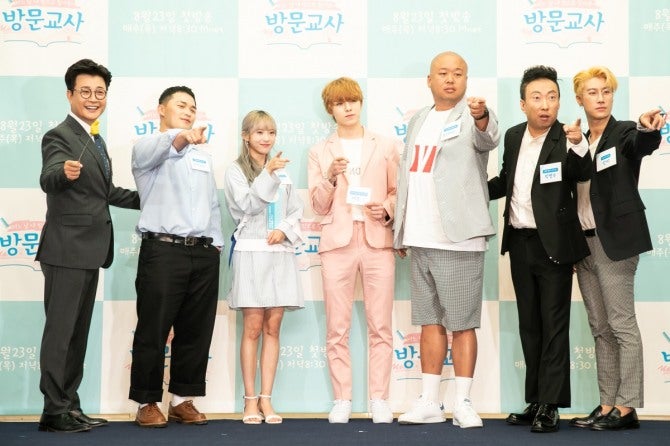 What if one of the most beloved celebrities greets you in your room and suggests studying together once you return from school?

It’s the stuff of fans’ daydreams, but for some, it will be a reality. Mnet’s upcoming variety show “My Celebrity Tutor” will have stars act as private tutors to study with ordinary students. They will not only teach students academic subjects but also act as life mentors and share advice with them.

The program will be hosted by TV celebrity Kim Sung-joo, comedian Park Myung-soo and rapper SanE, while Vernon of Seventeen, Luda of WJSN, Hongseok of Pentagon, rapper Microdot and musician Don Spike will appear as tutors, K-Pop Herald reports.

The show’s producer Shin Yoo-sun, who’s also orchestrated Mnet’s “Idol School”, shared that she paid attention to how celebrities can exert a positive influence on students’ academic achievements when planning the program.

“In the past, people used to think that fan activities lead to lower academic success. But these days, I’ve seen many students make remarkable academic achievements by using their favorite idols as their [motivators],” said Shin during a press conference for the program. Hongseok didn’t attend the event due to conflicting overseas schedules.

Two multilingual K-pop idols Vernon, who was born in New York and moved to Korea when he was 5 years old, and Hongseok, who’s has lived in San Diego, California, Singapore and China when he was younger, will be in charge of teaching English and Chinese, respectively. Luda, who’s known for her academic achievements, will teach science, while Microdot and Don Spike will teach mathematics and social science, respectively.

A preview for the program featured the surprised students yelling, collapsing and even crying when they first encountered their unexpected tutors. Asked if there were any difficulties teaching the students, Luda said that she felt burdened by the teaching, saying, “I prepared a lot so that I could teach the right thing to my student. But teaching a student made me realize that I can have a positive influence on somebody and that I can make changes in one’s life.”

Vernon went on to stress that the show motivated him to study as well. He said, “I was homeschooled since I quit school when I was in the second grade in middle school. So I had to study according to the school curriculum to teach my student, and it actually helped me a lot.” JB