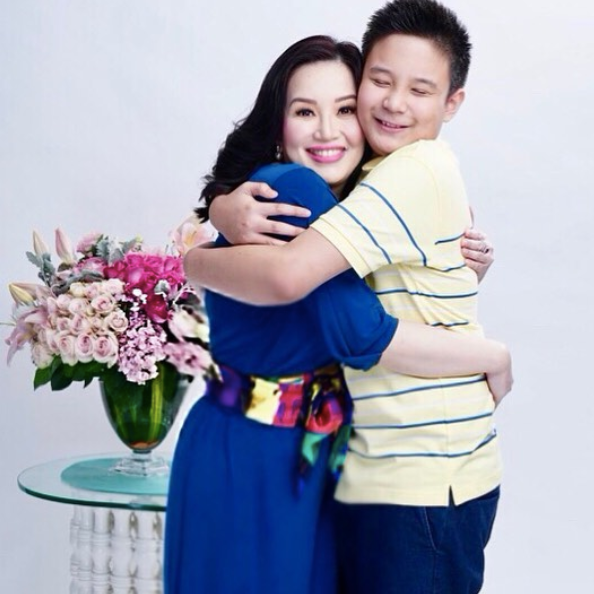 Kris Aquino commemorated her father Benigno “Ninoy” Aquino’s 35th death anniversary yesterday by posting a photo which showcased the similar features of her son, Bimby with that of his grandfather.

But when a commenter said that the Queen of All Media is denying her son of his father, James Yap, Aquino did not hold back in her reply.

(So. [You] insist. Your son looks like his father. He’s like a copy of his father. Even with the face, you’re deny your child that he has a father.) 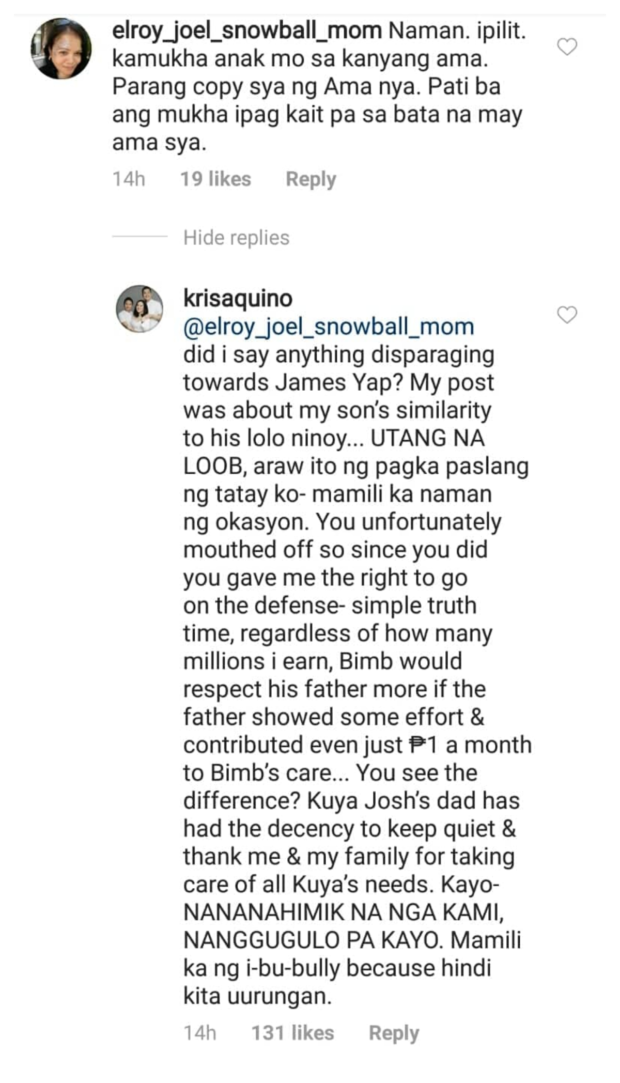 “Did I say anything disparaging towards James Yap?” replied Aquino. “My post was about my son’s similarity to his lolo Ninoy… Utang na loob, araw ito ng pagka-paslang ng tatay ko — mamili ka naman ng okasyon ([For the love of God], this is the day of my father’s assassination — [learn to] choose the [appropriate] occasion).”

Aquino revealed in her fiery retort that Yap doesn’t show effort and pay child support: “You unfortunately mouthed off so since you did you gave me the right to go on the defense — simple truth time, regardless of how many millions I earn, Bimb would respect his father more if the father showed some effort and contributed even just a P1 a month to Bimb’s care.”

“You see the difference? Kuya Josh’s dad has had the decency to keep quiet and thank me and my family for taking care of all Kuya’s needs,” said Aquino. She also issued a warning against the netizen. “Kayo — nananahimik na nga kami, nanggugulo pa kayo. Mamili kayo ng i-bu-bully because hindi kita uurungan.”

(You — we have been silent [on the matter], yet you’re causing trouble. Choose the person you’re going to bully because I won’t hesitate to fight back.)

In an Instagram post she shared today, Aug. 22, Aquino said she will be keeping her Instagram account inactive for the time being. She uploaded a photo of Dita Von Teese’s quote “I’ve always loved the idea of not being what people expect me to be.”

Kris Aquino and James Yap tied the knot in 2005. Five years later, Aquino revealed that their marriage was over. Their marriage was annulled in 2012, with Aquino keeping custody of Bimby. In April, after being confronted by fans, Yap’s Italian girlfriend Michela Cazzola broke her silence on the issue regarding Yap’s failure to pay child support, asserting that it’s a matter that does not concern her. JB

LOOK: Bimby is the spitting image of Ninoy Aquino