Jennifer Garner honored with star on Hollywood Walk of Fame 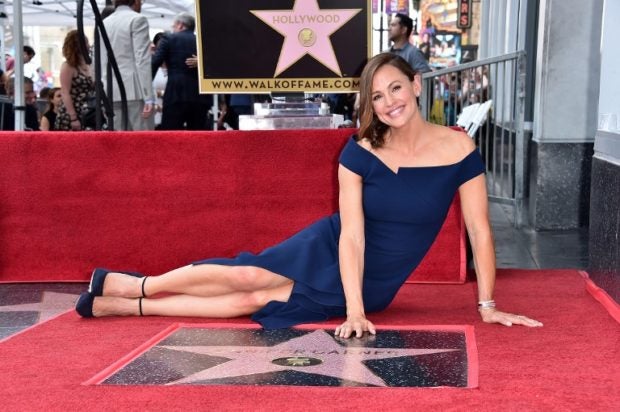 Actress Jennifer Garner attends the ceremony honoring her with the 2,641st star on the Hollywood Walk Of Fame on August 20, 2018 in Hollywood, California. Image: Alberto E. Rodriguez/Getty Images/AFP

Jennifer Garner received a star on the Hollywood Walk of Fame Monday to honor a glittering career that has included roles in acclaimed movies from “Juno” to “Dallas Buyers Club.”

The Texas-born actress has appeared in more than 30 films over two decades but is just as famous for a television career that has seen her garlanded with some of the industry’s top awards.

“Today for me is a moment to mark 24 years really joyfully lived, in a job that I love so much. And to get to share with my family and friends is pretty amazing and special,” the 46-year-old star told AFP.

Actors Steve Carell and Bryan Cranston — who starred with Garner respectively in the 2014 comedy “Alexander and the Terrible, Horrible, No Good, Very Bad Day” and 2016’s “Wakefield” — paid glowing tribute.

Also on hand to celebrate was Judy Greer, who appeared alongside Garner in 2004 fantasy comedy-romance “13 Going on 30” and 2014 comedy-drama “Men, Women and Children” before directing her in the 2017 comedy, “A Happening of Monumental Proportions.”

Born April 17, 1972, in Houston, Garner and her family moved to Charleston, West Virginia, when she was three.

She graduated from Ohio’s Denison University in 1994 and made her television debut in “Danielle Steel’s Zoya,” a 1995 NBC miniseries about Russia in 1917.

In 2001, Garner got the role that catapulted her onto the A-list, as CIA agent Sydney Bristow in ABC series “Alias,” which ran for five seasons.

Garner received Golden Globe and Screen Actors Guild awards for the part, as well as four outstanding lead actress nominations at the Emmys.

In 2005, Garner married Oscar winner Ben Affleck, her co-star in “Pearl Harbor” and “Daredevil.” The couple had two daughters and a son together but announced on June 30, 2015, one day after their ten-year anniversary, that they were divorcing.

In “Peppermint,” due for US release on September 7, Garner portrays a woman who becomes a vigilante after her husband and daughter are killed in a drive-by shooting by members of a cartel.

“This is a career that you can take some credit for, but not much. Luck plays a big part,” she told AFP. MKH

Reese Witherspoon, Keith Urban on board for cancer telethon