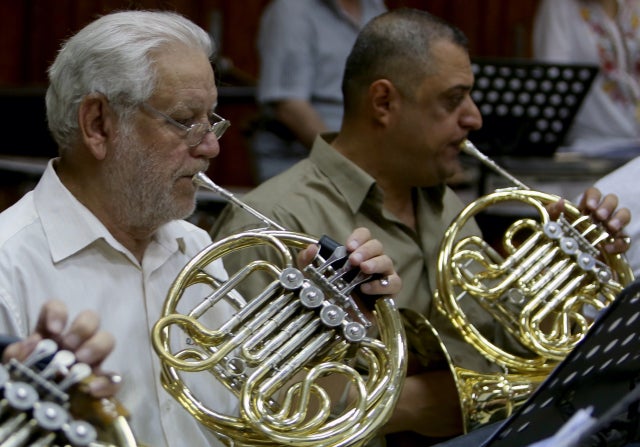 In a dusty Baghdad dance studio, conductor Mohammed Amin Ezzat tries to fire up the musicians of Iraq’s National Symphony Orchestra, whose enthusiasm has been dampened by eight months without pay.

An ageing air conditioner fights to beat back the summer heat in the cramped space at the capital’s School of Music and Ballet as the 57-year-old maestro leads the group through a rehearsal of Modest Mussorgsky’s “Night on Bald Mountain”.

The shaggy-haired Ezzat and the 40 musicians surrounding him are gearing up to perform at Baghdad’s National Theater on Saturday, but the group’s morale is at an all-time low.

The ensemble has lost more than half its members since the start of the year, when the government issued a directive barring state employees with two jobs from receiving two salaries.

The anti-corruption measure was suggested by the World Bank and should affect only about a third of the orchestra’s musicians, but because of delays in carrying out the reform wages have been withheld from the entire group.

“The orchestra is in great danger,” Ezzat said. “Some don’t have enough money to come, and others are disappointed by the impact of politics on the orchestra.”

It has survived wars, an invasion, a 12-year international embargo and a devastating three-year battle against Islamic State group jihadists, which came to an end last year.

But this may be the last straw for the outfit, a collateral victim of Iraq’s “war on corruption”.

“Not being paid for eight months has had a terrible psychological effect on the musicians, but we’ll continue to resist peacefully with our music,” said Ezzat, who became the orchestra’s first Iraqi conductor in 1989.

“We’re on the precipice but sure that we won’t jump.”

When all its salaries are tallied up — including the maestro’s $1,200 a month, peanuts for a major conductor — the orchestra costs the state about $85,000 (about P4.5 million) a year.

The sum is a pittance compared to the exorbitant figures syphoned off by ministers and high officials who have either fled or been arrested.

The conductor, his daughter Noor, a timpanist, and his sons Hossam and Islam, who play the cello and viola respectively, have all been without a salary since January.

But according to Raed Allawi, the head of administrative affairs at Iraq’s culture ministry, there is no reason to panic — the wages will soon be paid.

“The finance ministry has asked for a regularization of contracts. Verification measures are under way and this explains the late payment of wages,” Allawi said.

“The orchestra is one of the country’s cultural showcases (and the ministry) respects its artists and their talent.”

For the symphony’s musicians, however, these are empty words they have heard already.

Saad al-Dujaily, a professor of medicine and a flutist, thinks the measure is regressive.

“I’ve been an obstetrician and a flute player since I was very young,” he said.

Because of the directive, the 57-year-old practitioner — who teaches at Baghdad’s al-Nahrain University and plays in the national orchestra — is now entitled to only one salary.

Further along into the rehearsal, the studio’s electricity cuts, a common occurrence in a country plagued by power outages.

The orchestra cannot afford the diesel to fuel the building’s generator.

But the musicians play on in the windowless room, using their cell phones to illuminate the sheet music.

“There have been crises in the past, but this is the worst,” said Doaa Majid al-Azzawi, an oboe player.

“Especially since my father and I are musicians. We don’t know what will happen, but if the orchestra has to stop, it’s culture in Iraq that will be dealt a deadly blow,” the 25-year-old said.

When the studio’s lights eventually make a flickering return, so too does the players’ enthusiasm, and the music swells.

“As long as we live, music will live. It’s our culture,” said Noor, the conductor’s daughter. AB