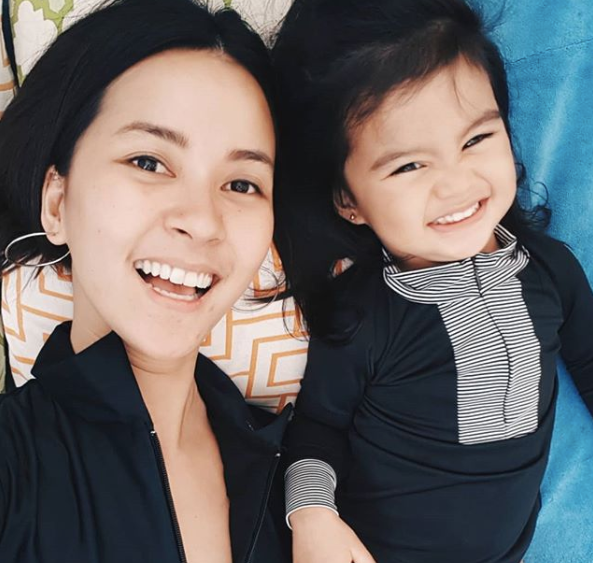 Bianca Gonzalez has been vocal about social issues, from celebrating morena skin amid the popularity of skin whitening products, to giving a voice to the LGBTQ+ community through her vlog “Paano Ba ‘To?”

As a parent, it translates then that she is conscious of how her children can be raised to be free of stereotypes. She spoke about her efforts in an Instagram post yesterday, Aug. 11, which shows her two-year-old Lucia walking through a ball pit dressed in pink and with a unicorn headband.

“Since she was born, I’ve been very conscious about exposing our daughter to gender-neutral colors, toys and books,” said the TV host.

“White, gray, khaki, navy. Cooking sets and cars. No such thing as for girls only or for boys only,” she added.

Exposure to Disney princesses is limited — Lucia is only aware of the title character in “Elena of Avalor” and Elsa from “Frozen”, which led Gonzalez to wonder, “Am I a crazy mom?”

However, she acknowledged that parenting isn’t foolproof in raising children in a gender-neutral manner. “But as she grew older and got more exposed to playmates and school and the world, she naturally gravitated towards liking violet and pink,” she said, affectionately calling Lucia her “little unicorn.”

Parents chimed in on her parenting style, assuring her there was nothing wrong with her efforts.

Netizen @angelanne33 said Gonzalez’ post made her feel “relieved” because she was initially worried that her 27-month-old daughter wasn’t as into “girly stuff” as her peers. “[I] realized that it’s just a phase and as they grow up they would start to have their own preferences and personalities,” she mused.

“I’ll just keep calm and wait until she turns out be a fine lady (or maybe not)… but whatever or whoever she wants to be when she grow[s] up, I’d still be a mom that supports her all the way,” she said.

“You are not crazy at all,” said one Chelle Agapito (@marichelleaa). She commented that her daughters have seen both Disney and action movies, and preferred playing with Lego and action figures rather than stuffed toys and dolls. “They have identified themselves as girls who know what they want and never have to do as everybody else,” she said of her kids.

Another netizen, @music_and_lyrics8 seemed to suggest that exposure to Disney princesses was harmless because they were made in a time “where people were not too focused with being so charged with advocacies or feminists accusing these princesses of being poor role models for girls.”

“It was simply pure story-telling, imagination, wonder, magic and the Alan Menken songs,” s/he reasoned.

Media does have a role in reinforcing gender stereotypes, according to a 2017 Common Sense Media report, “Watching Gender: How Stereotypes in Movies and on TV Impact Kids’ Development.” The analysis of over 150 articles and research showed that movies and TV shows are effective in teaching children cultural expectations of being a boy or a girl.

But all is not lost for parents. Aside from choosing the quality of media children are exposed to, being a role model of gender equality and speaking against stereotypes can influence them on what they think. Children learn about their gender identity between 2 to 6 years old, which means that even at a young age, parents can start opening them up to the idea that gender is not limited to certain activities or interests. JB

Bianca Gonzalez gives her take on ‘unspoken pressure’ to breastfeed

Youth veering away from gender stereotypes